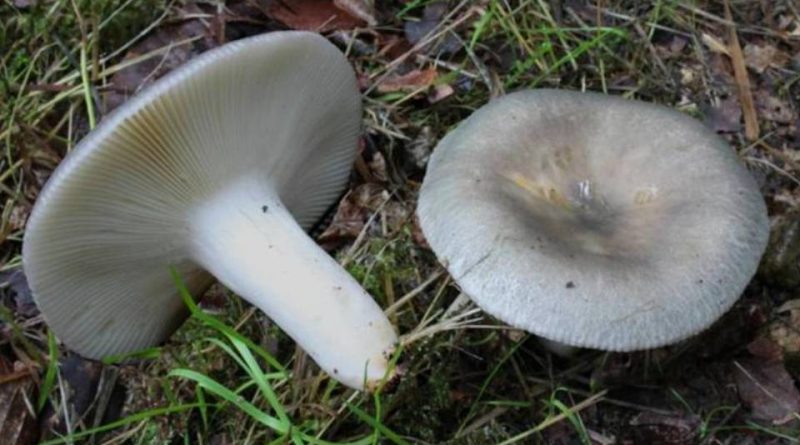 Etymology –
The term Russula is the diminutive of red rússa: red. The specific epithet anatina comes from ánas-ánatis anitra: similar to a duck, due to the similarity of the color.

Geographical Distribution and Habitat –
The Russula anatina is a fungus that grows mainly broad-leaved, near oaks and aspen. This mushroom is found above all on calcareous soil and in open places and fructifies isolated or in groups of 2-3 specimens.

Recognition –
It is recognized by the medium-sized hat, 4–9 cm in diameter, first hemispherical, then convex, finally flattened with a depressed center; the margin is convoluted in the young specimens, slightly curved also in the adult, appearing just grooved only in very mature specimens.
The cuticle is dry, finely velvety, separable up to about half radius and characteristically chapped at the margin, olive-gray color, gray-bluish darker in the center, while in the adult specimens appear here and there more or less extensive yellow-ocher spots .
The lamellas are dense, more spaced in the adult specimens, fragile, annexed or adnate-annexed, forked near the stem, of a light cream color, which then darken to maturity showing ocher reflections.
The stem is 4-8 x 0.8 – 1.5 cm, firm but soon spongy, cylindrical with a slightly attenuated base; the external surface is smooth, which then becomes a little rugulose in the adult, white in color but with a tendency to be speckled with ocher starting from the base.
The flesh is quite firm, white, gray-olive under the cuticle, odorless and with a mild sweet taste, slightly spicy in the lamellae of the young specimens.
At the microscope spores of 6-7.5×5-6.8 µm are observed, subspherical, with the surface adorned with isolated conical warts, up to 0.6-0.8 µm high; the apiculture is very pronounced and the plaga is little or not amyloid at all.
The cystidia are 65-120 x 7-12 µm, spindle-shaped, with apical appendix or capitulus.

Cultivation –
Russula anatina is not a cultivated mushroom.

Uses and Traditions –
This fungus is characterized by the cuticle which often has stretch marks and small lacerations (similar to Russula cutefracta) that show the underlying white flesh, more evident towards the margin. It is distinguished from other similar species by the habitat, below oak, and by spores with isolated conical-shaped warts.
It is however similar to the Russula medullata, from which it differs for the velvety cut and more chapped towards the margin, the conical and non-obtuse sporal warts, and for the larger cystidia.
It is an edible species but without particular merits.

Preparation Mode –
The preparation of this russula and its uses in the kitchen can follow the methods used for other edible russules.