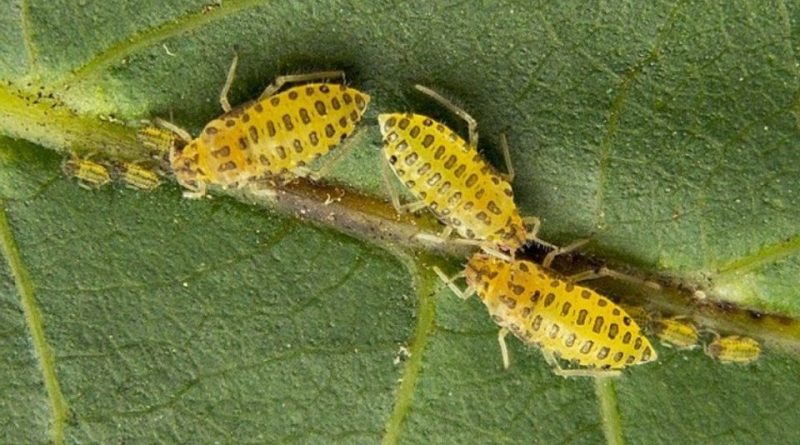 The greater aphid of the walnut (Panaphis juglandis (Goeze, 1778)) is an insect recoiled from the Aphididae family.

Geographical Distribution and Habitat –
Walnut greater aphid is a species widespread in various areas of nut cultivation. In Europe it is present almost everywhere, with the exception of Ireland, Iceland, Sardinia and Crete and some countries, northeastern, such as Russia, Belarus and the Baltic countries. The aphid is rarely present in the Scandinavian peninsula and, since 2014, in Norway, while it is not present in Finland. It is found in Turkey, in some parts of Central Asia and in Pakistan.
It was accidentally introduced to the west coast of the United States.

Morphology –
Panaphis juglandis is an aphid characterized by having yellowish-colored immature stages, with rows of dark spots on its back; the adult forms, with dimensions of around 3.5-4.3 mm, are winged, yellowish in color, with black heads and thoraxes and black transversal bands on the abdomen, with short and truncated sifuncles. The eggs are recognizable because they are very dark, tending to black.
These aphids are characterized by an aposematic color, although it cannot be excluded that it is a Batesian mimicry. This coloration, especially in the immature stages, could play a cryptic and mimetic function, allowing aphids aligned on the leaf’s rib to go unnoticed by predators or be less visible.

Attitude and biological cycle –
The greater aphid of the walnut is a monofagous species, which feeds exclusively on the white walnut (Juglans regia).
These aphids normally stand on the upper page of the leaf, aligned along the central grain and with the head facing the petiole. Furthermore, some ants frequently perform a protective action in their regard.
The wintering eggs of Panaphis juglandis, which were laid on walnut, usually hatch in May to give rise to the founding generations, which are viviparous parthenogenetic females (which colonize the upper sides of the walnut leaves along the veins) that give life to a series of spring and summer generations directly on the plant; subsequently, in the period of September-October then the sexual forms appear (males and females), which will be those that will lay the winter eggs, deposited in the bark of the plant, which pass the winter on the plant.

Ecological Role –
The Panaphis juglandis is an aphid that under certain conditions can share its biological cycle on the white walnut together with another slightly smaller aphid which is the Cromaphis juglandicola. The latter, however, lives on the lower face of the leaves. In any case, the two species rarely coexist on the same plant, since it seems that P. juglandis is damaged, or at least disturbed, by the presence of honeydew and debris produced by C .juglandicola, which fall from the overlying leaves.
The Panaphis juglandis lives on the upper sides of the leaves of the Juglans regia, according to a characteristic arrangement in rows along the veins.
Ecologically, they establish “collaborations” with ants that more often collect honeydew from the surrounding leaves.
As for the aposematic coloring, it is noted that this is typical of aphids that live in very exposed situations, rather than those that feed on the lower part of the leaf. It is not clear, however, whether the aphids are in bad taste and therefore unwelcome for vertebrate predators or not.
The Juglone present in walnuts is toxic to other plants but not, as far as it is known, to herbivorous insects.
The Panaphis juglandis causes damage that, as for the rest of the aphids, are determined by the punctures they carry to feed, which can cause deformation of the leaves and localized necrosis, as well as the production of honeydew which consequently also involves the formation of fumaggini.
The honeydew, however, is also a source of attraction for the bees that use it to produce the so-called honeydew honey. The walnut aphid can be contained, as for all aphids, first of all with the introduction or facilitation of its predatory or parasitic species, including ladybirds, hoverflies, cecidomids and various species of parasitoid hymenoptera.
The use of chemical interventions must be absolutely supported by real ecological and economic needs, advisable only in case of massive infestations and evaluating all other ecological damages, often not accounted for.