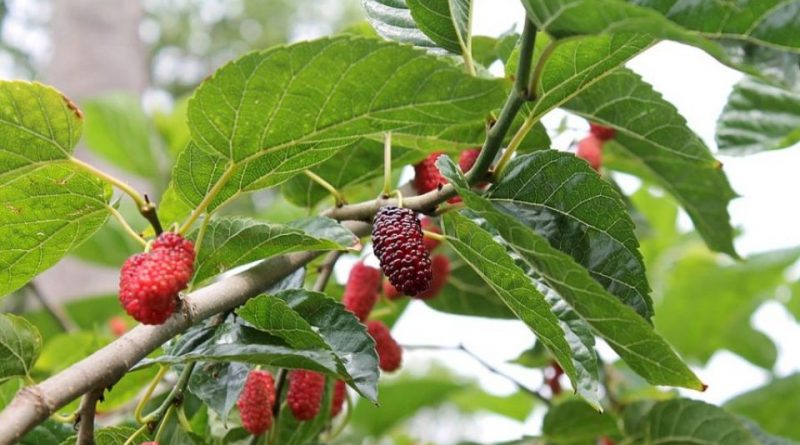 The red mulberry (Morus rubra L.) is an arboreal fruit species from the Moracee family.

Systematics –
From the systematic point of view it belongs to the Eukaryota Domain, United Plantae, Magnoliophyta Division, Magnoliopsida Class, Urticales Order, Moraceae Family and therefore to the genus Morus and to the M. rubra Species.

Etymology –
The term Morus comes from morus, the Latin name of the mulberry tree in Ovid and Pliny derived from the Greek μορέα moréa which means part, referring to the infructescence formed by many small fruits with a fleshy shell.
The specific epithet rubra derives from rúbeo reddish, being red: due to the color of its fruits.

Geographical Distribution and Habitat –
Morus rubra is a widespread species in the central and south-eastern United States of America. It is present, albeit to a lesser extent, also in Europe and Italy because it is cultivated, but in Canada it has become a rare and endangered species.
Its original habitat is that of the shaded woods, near streams, embankments, ditches, ravines, and humid depressions. 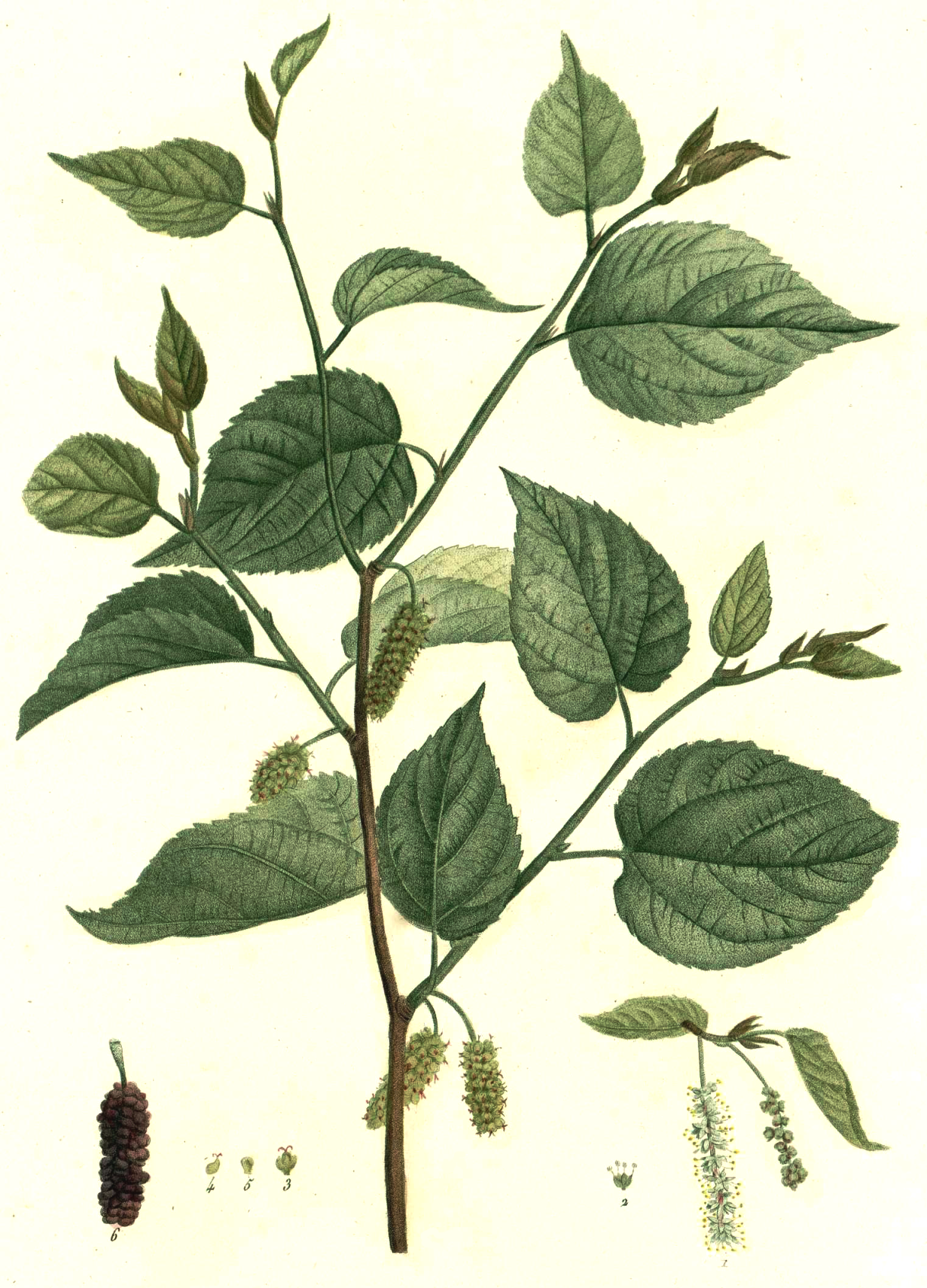 Description –
Morus rubra is a long-lived species that can exceed a century of life. It is a plant of small and medium size, deciduous and broad-leaved, with fast growth. This plant can reach a height of 10-15 m and rarely up to 20 m, with a trunk up to 50 cm in diameter.
The leaves are alternate, 7-18 cm long and 8-12 cm in width and with a finely serrated edge.
The upper surface of the leaves is visibly rough, similar in consistency to fine sandpaper, which differs from the shining upper surface of the leaves of the white mulberry. The lower part of the leaves is covered with soft hairs. A milky sap gushes from the leaf petiole when it is cut.
The flowers are relatively inconspicuous, small, yellowish green or reddish green, with male and female flowers usually carried by different plants (dioecious), although they may be found on the same tree.
The fruit (sorosio) is composed of several small achenes surrounded by a fleshy calyx, similar in appearance to a blackberry, 2-3 cm long. Initially it is pale green in color, which when ripe ripens to red or dark purple, edible and very sweet with a good flavor.
Flowering occurs during the month of April and the fruits ripen in June-July.

Cultivation –
For the cultivation of red mulberry it is to be kept in mind that it is a species resistant to temperatures below zero ° C, relatively resistant to drought, pollution and poor soils and moderately tolerant to the presence of limestone.
It needs slightly larger irrigations than white or red mulberry and should be placed in moderately sunny areas even if it lives well in various conditions.
For the details of the cultivation technique, see the following sheet.

Uses and Traditions –
Morus rubra is a plant that, being of American origin, boasts a series of traditions and uses that are lost in the mists of time. The first English settlers to explore eastern Virginia in 1607 mentioned the abundance of this plant, whose fruits were eaten, sometimes boiled, by the native Powhatan tribes. There are also references where it is described that the pre-colonial Cherokee tribes used the soft inner fibers of red mulberry wood to weave a fine fabric like European linen.
Today the red mulberries are eaten, especially in the United States and in Canda, raw, used in pastry and fermented in wine.
The wood can be dried and used to smoke meat with a delicate and sweet taste.
Red mulberries are also a nourishment for birds, in the period from spring to early summer in North America; 31 species of birds have been counted that feed on these fruits.
Within the Morus rubra we find numerous varieties; among these we mention: the Hicks, a fast-growing variety selected in the USA since 1850, used for fruit crops; Stubbs, widespread since 1875, considered the best fruit variety of the Morus rubra, with fruits 3.5-5 cm long; the Townsend, which spread in 1904, which reaches maturity early and the fruit is very similar to Hicks, but with better characteristics both for taste and consumption; the Illinois Everbearing, a hybrid Morus alba × Morus rubra.