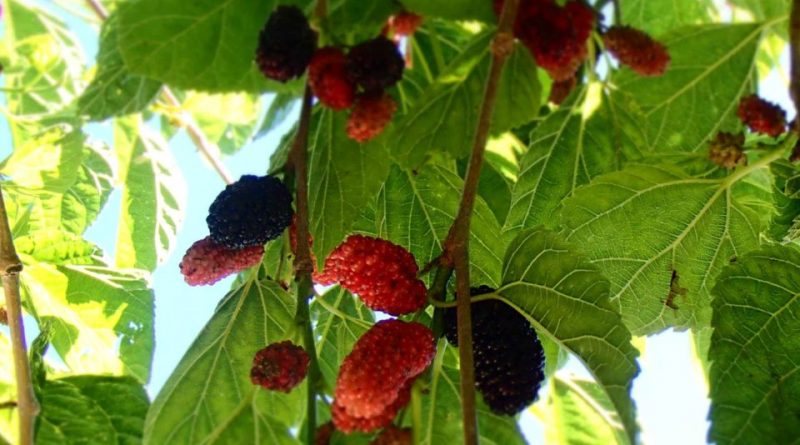 The black mulberry (Morus nigra L.) is an arboreal fruit species from the Moracee family.

Systematics –
From the systematic point of view it belongs to the Eukaryota Domain, United Plantae, Magnoliophyta Division, Magnoliopsida Class, Urticales Order, Moraceae Family and therefore to the Genus Morus and to the M. nigra Species.

Etymology –
The term Morus comes from morus, the Latin name of the mulberry tree in Ovid and Pliny derived from the Greek μορέα moréa which means part, referring to the infructescence formed by many small fruits with a fleshy shell. The specific epithet nigra comes from black niger: due to the color of the gems but not the fruits.

Geographical Distribution and Habitat –
Black mulberry originates from Asia Minor, between Persia, Turkey and Arabia, but it has spread widely in ancient times to other countries and to Europe as a fruit tree; it is reported as an adventitious species in many regions of Italy. 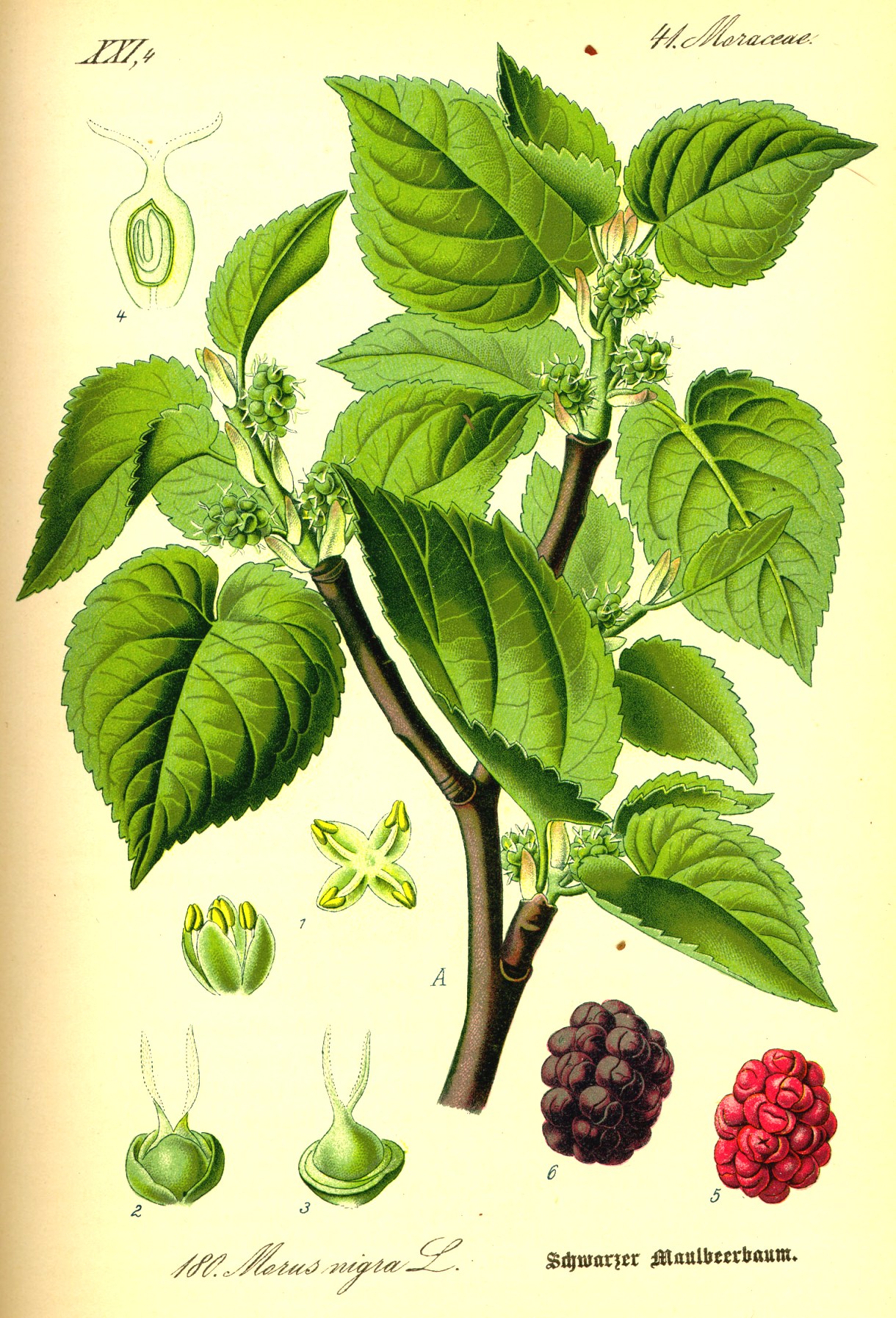 Description –
Morus nigra is a very long-lived plant that can live up to 100-150 years; it is a deciduous and broad-leaved tree, normally up to 8 meters high but which can reach 15-20 m, with a crown characterized by robust and coarse branches. This species is similar to the white mulberry, but differs in some salient characters: the leaves are pubescent in the lower part and rough in the upper one, heart-shaped at the base and with a toothed margin.
The flowers are of different sexes are usually carried by separate plants, so the black mulberry is made up mainly of dioecious plants; the cases of specimens with both inflorescences on the same plant are not rare.
Flowering occurs between April and May and fruiting occurs in June-July.
The fruit (sorosio) is made up of small fleshy berries that take on a red-purple color and a sweet taste when ripe.

Cultivation –
For the cultivation of black mulberry, bear in mind that it is a little less resistant to the cold than Morus alba, so the species is more widespread in the southern regions. However, it is a hardy and resistant plant, but the leaves are very appetizing to various moths, as well as to the larvae of the silkworm. Like other mulberries, the plant prefers moist soils, but it also bears poor soils. Cultivation in places open to the traffic of people and cars is avoided, since the fruits, which are very juicy and colorful, if not collected fall and smear people and vehicles.
It is however cultivated, with particular varieties, as an ornamental plant in parks and gardens. For the details of the cultivation technique we can refer to the following sheet.

Uses and Traditions –
Morus nigra has been known since ancient times; Ovid recounts that two young Babylonians, Piramo and Tisbe, who love each other intensely despite the opposition of the families and who, due to a tragic misunderstanding, both die and, due to the blood coming out of their bodies, the mulberry berries became dark. His wisdom served in the Renaissance to give rise to the emblem of diligence.
The Romans already knew the fruits that were appreciated not only by Ovid, but also by Pliny the Elder. Formerly it was appreciated as a sort of panacea; in fact, several miraculous medicines were obtained.
The black mulberry was once widely cultivated for fruit production in southern Europe. Today it is mostly used as an ornamental tree; the presence of fruit-bearing mulberry trees is currently quite rare and the specimens present are often very old. It can now be classified in rare and forgotten fruits. In the past, this plant has also been used to feed silkworms, later replaced by the white mulberry most pleasing to larvae, with which it is frequently confused.
In Italy, especially in the Sicily region, the fruit of this tree is used both as a table fruit and as a component of sweets, jams and garnishes.
Mulberry blackberries are antidiabetic, astringent and in general hypoglycemic; the root is purgative and diuretic; the bark is disinfectant and healing.

Preparation Mode –
In southern Italy the fruit of the black mulberry is used as a component of sweets and toppings; the mulberry granita is famous in Sicily. Even tender leaves can be used for human consumption, being somewhat sweet.
Infusions of the leaves, decoctions of the roots and syrup of the fruits can be prepared for internal use and, moreover, compresses with the boiled leaves against irritation.