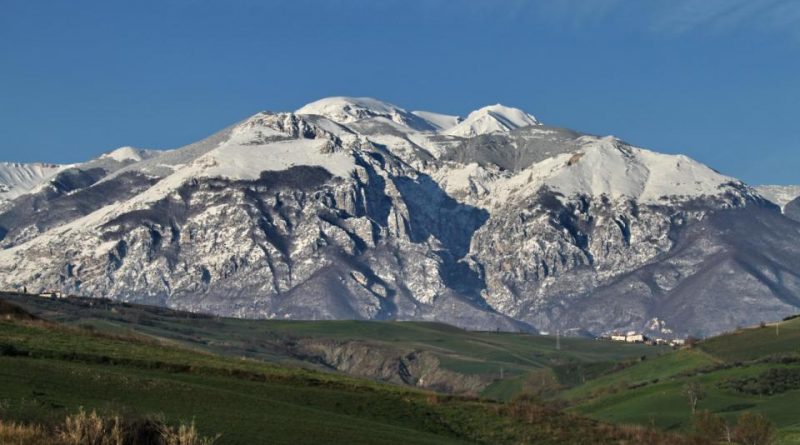 The Majella National Park whose identification codes are: WDPA Code 64513 and EUAP Code 0013 was established in 1991 and is one of the three national parks of Abruzzo, between the provinces of L’Aquila, Pescara and Chieti. The territory of the park covers an area of ​​about 62,838 hectares, on a predominantly mountainous terrain. In fact, the area of ​​the Park is gathered around the great limestone massif of the Majella and the mountains of Morrone to the west and the Pizi and Porrara mountains to the east . The largest peak included in the park area is that of Mount Amaro (2,793 meters).
Within the park there are seven state nature reserves and some cultural assets, among the most important in Abruzzo.
The Majella Mountain, Father of the Mountains to Pliny the Elder, Mother Mountain for the Abruzzese, tall, imposing, wild, mountainous group, is part, by right, of the world heritage of the National Parks. This complex is geographically formed by four great orographic individualities – the Majella properly called, large and compact calcareous massif, the Morrone, the Porrara and the Pizzi Mountains, with the karst valleys and planes that interpose themselves between them – is a National Park that by position geographically, due to its harshness, vastness and grandeur, due to its rigor and climatic changeability, it is certainly unique in its kind and contains within it, in vast areas (widelands), which present peculiar aspects of wild nature (wildland), the part more valuable and rare than the national heritage of biodiversity, of European and world importance. Its slopes, especially the eastern and north-western ones, are furrowed by very long and rugged valleys. The Orta river, which gathers the waters of a vast basin, separates the Majella massif from Morrone with a wide valley. The valley is deeply engraved in the territories of the municipalities of Bolognano and San Valentino, forming a veritable canyon. The Morrone massif consists of a narrow and elongated ridge, compact and rugged at the same time, made up of limestone and dolomite rocks, which precipitates in the plain of Sulmona between steep rocky cliffs. To the south, at the foot of Mount Pizzalto, the karstic plains known as “the greater plateaus of Abruzzo”, also called “quarters” (Santa Chiara, Barone, Grande and Molino), located at about 1,250 m above sea level, act as a hinge with the area of ​​the Pizzi mountains – Mount Secine, with beech woods, Lobel maple and several other species.
The Majella National Park is made up of the following Provinces, Mountain Communities and Municipalities, which are:
– Mountain communities: Peligna, Alto Sangro and plateau of Cinquemiglia, Majella and Morrone, Majelletta, Aventino-Medio Sangro, Medio Sangro.
– Provinces: L’Aquila, Chieti, Pescara.
– Municipalities: Civitella Messer Raimondo, Fara San Martino, Gamberale, Guardiagrele, Lama dei Peligni, Lettopalena, Montenerodomo, Palena, Palombaro, Pennapiedimonte, Pizzoferrato, Pretoro, Rapino, Taranta Peligna, Ateleta, Campo di Giove, Cansano, Corfinio, Pacentro, Pescocostanzo, Pettorano sul Gizio, Pratola Peligna, Rivisondoli, Rocca Pia, Roccacasale, Roccaraso, Sulmona, Abbateggio, Bolognano, Caramanico Terme, Lettomanoppello, Manoppello, Popoli, Roccamorice, Salle, Valentine’s Day in Abruzzo Citeriore, Sant’Eufemia a Maiella, Serramonacesca , Tocco da Casauria.

The Flora
Within the Majella National Park, over 2,100 plant species have been counted, representing approximately one third (37%) of all Italian flora; some species have been identified for the first time by botanists on the spot. There are more than 150 animal species, of which the tortolino beak is particularly important.
Some EU-co-financed projects exist to safeguard the biodiversity of this Park. Among the species of community interest at the center of these projects we mention: Cypripedium calceolus, Adonis distorted, Androsace mathildae, Iris marsica, Astragalus aquilanus, Klasea lycopifolia, Jacobaea vulgaris subsp. gotlandica. These are seven rare plant species, some endemic and in danger of extinction. 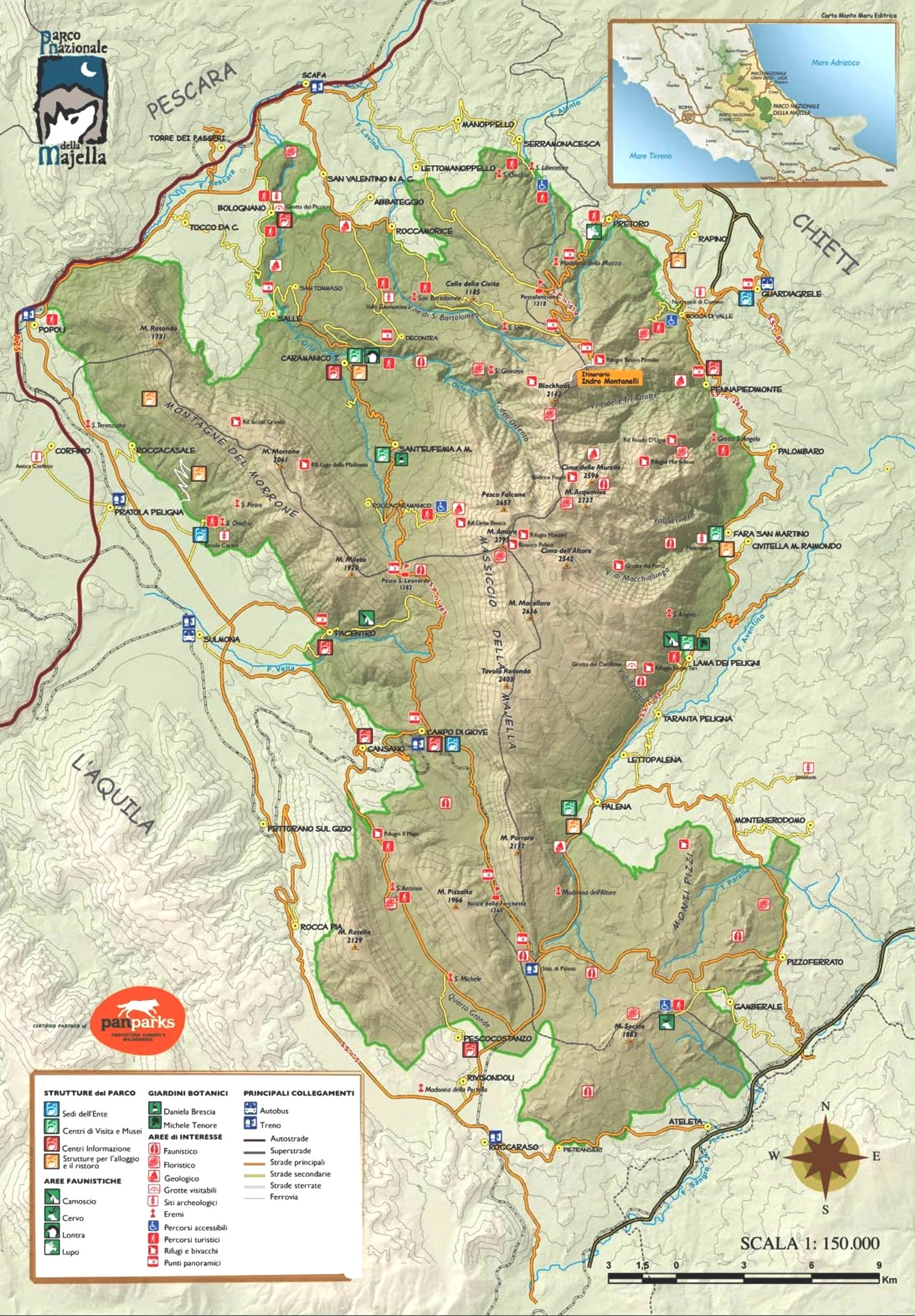 These projects also include in situ conservation (“in their own environment”), protection and consolidation of existing populations threatened by human activities and the spontaneous evolution of natural vegetation. In particular, it is foreseen the protection and the increase of the populations of the species (both increasing the number of individuals in the existing stations and with the creation of new stations) within the Majella National Park (Cypripedium calceolus, Adonis distorted, Androsace mathildae , Iris marsica and Astragalus aquilanus), in the Sirente-Velino Regional Park (Klasea lycopifolia, Jacobaea vulgaris subsp.gotlandica, Astragalus aquilanus, and distorted Adonis) and in the National Park of Abruzzo, Lazio and Molise (Cypripedium calceolus and Iris marsica), using “ex situ” plant material (in an artificial environment) starting from propagules (seeds and other parts of the plant) collected in nature. On the seeds, which will be collected in the parks of the Abruzzo region and in the neighboring territories, analyzes of the germination processes will be carried out. Part of the reproduced plants will be cultivated in specific areas of botanical gardens and park visitor centers. The protection of the sites of Klasea lycopifolia from the pasture and from the mowing that put at risk the production of fruits is also foreseen.
The park’s forest heritage is also interesting, affecting more than half of the protected area. For about two thirds it is made up of woods, the rest of which is made up of shrubbery.
Predominantly we find the deciduous temperate forest, which is presented in various forms: beech, cerrete, oak oaks (Quercus pubescens), ostereti, riparian hygrophilous formations, to which is added a single peel of birch (Betula pendula). The evergreen component, on the other hand, is composed of mountain pine, pine forests of native black pine (Pinus nigra var. Italica), reforestation of various conifers, junipers and the holm oak that grows on the most steep surfaces at lower altitudes.
The most widespread physiognomic typology is the beech forest, which occupies just under 30% of the Park’s territory. It is located in the mountain belt, between 1000 and 1800 m of altitude. Lower down are the oak and mixed forests of thermophilous deciduous trees; higher up, up to 2300-2400 m asl, the subalpine shrubs, ie prostrate formations with mugo pine (Pinus mugo), dwarf juniper (Juniperus communis var. saxatilis) or bearberry (Arctostaphylos uva-ursi). The pine population Majella della Majella, the largest in the whole of the Apennines, is of considerable biogeographical and conservation value, since it is a rare species that has the southern distribution limit in Abruzzo. On the other hand, the Lobel Maple (Acer lobelii), an endemic arboreal species linked to beech-woods, sees right here in the Park, along the Adriatic side, its northern limit. The intense use of the natural resources of past centuries has reduced both the extension, both the structural and functional complexity of the forest, which is generally found in a condition very far from the true natural coenoses. However, in recent decades the forest has been recovering surface and structure and it can be safely said that the territory, in the last century, has never been wooded as it is now.
In addition, in the Majella National Park there is no lack of ancient forest features, characterized by the presence of tree species of considerable size and abundant dead wood, as well as by a high diversity of species. Examples are the Bosco di S. Antonio, in Pescocostanzo, and some portions of beech forest in the territories of Palena and Pizzoferrato.

The Fauna
The Majella National Park is home to the most important group of Marsican bears present outside the National Park of Abruzzo, Lazio and Molise and its External Protection Area: the 2015 estimate is from 5 to 9 specimens.
In the Park there is the most important Apennine chamois population: about 1,000 animals in 2017. It should be remembered that the chamois had become extinct in the past, but was reintroduced in 1991 by taking some specimens from the National Park of Abruzzo, Lazio and Molise. The Apennine wolf is present with a population (2013) of at least 50 stable specimens, grouped into 11 herds, plus numerous isolated and erratic individuals, for a total of 70 to 80 wolves.
The deer was returned to the state nature reserves in the 1980s and now has about 700 to 800 head.