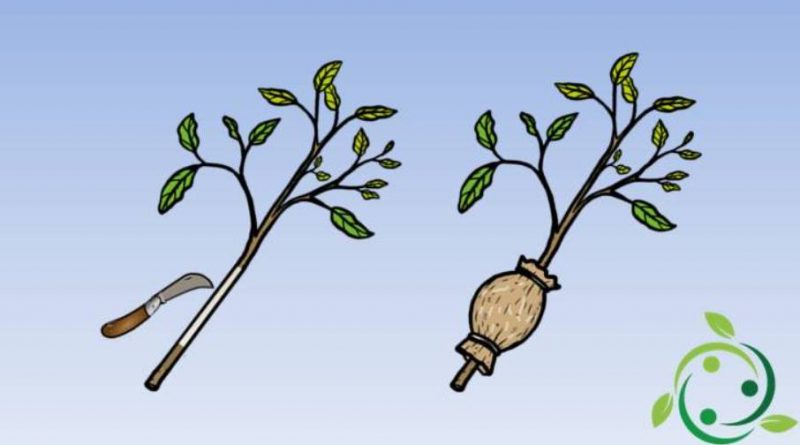 Laying is a technique of multiplication of plant species. It is an agamic (asexual) reproduction technique of plants, which is used as an alternative to cuttings or offshoots, which consists in rooting a branch still connected to the mother plant.
The technique of propagation by layering consists in inducing the emission of roots from any point of the branch without even being detached from the mother plant.
When the portion of the branch, induced to the emission of the roots, will have rooted, it will be possible to separate the portion with the new roots and make it grow autonomously.
The layering propagation technique can be performed with some variations and different methods, see them:

Air margin:
– this technique consists of wrapping a branch with a canvas containing earth. The part of the branch in contact with the earth will be stimulated to emit adventitious roots, both due to the humidity maintained in the earth inside the canvas and to the possible addition of rooting hormones. Subsequently, when the roots have formed and developed, the branch is cut below the lower garter; at this point both the rooting ground and the containment canvas will be removed, without damaging the young roots, and the portion of the branch with the roots will be ready to be transplanted, forming a new plant.

Tree stump:
– This technique is used to produce fruit-bearing rootstocks; it is the most efficient technique from the point of view of the relationship between the quantity of produced material and the production costs (space and labor). With this procedure the mother plants are arranged in rows (40–50 cm in the row) and after a year, before the vegetative restart, they are eaten at the collar: this system stimulates the emission of numerous shoots which, once reached 15 –20 cm in length, they are covered at the base with earth in order to stimulate the emission of adventitious roots.

Thus, at the end of the season, rooted cuttings are obtained ready to be harvested. The operation can be repeated several times over time: a well-maintained stalk layer can last up to 15-20 years.

Arched margin:
– But the arched layering, also known as a simple offshoot, is used for ornamental plants (eg jasmine) and for some fruit-bearing plants. It originates by bending a young branch of a plant to bury it and then turning it upwards supported by a stake. The underground part emits adventitious roots and the aerial part new shoots forming a new seedling. Once established, the connection branch is cut.
In general, therefore, the technique to stimulate the emission of a new root system is to engrave the bark with a sharp and clean knife, removing a ring of height more or less equal to the branch diameter; once the bark is removed, the rooting hormone is spread on the barked part and surrounded with soil, sphagnum, peat, or peat and perlite or peat and pumice mixtures. Everything must be covered with dark plastic material, preferably black, to preserve the necessary humidity and to ensure that the roots are formed, the soil must be kept constantly humid (for example with the help of a syringe).
When the part of the branch has emitted the roots it will be ready, as mentioned, to start the biological activity as a new plant.
As far as the most suitable period for layering is concerned, it is the one between May and June, a period in which the temperatures are sufficiently mild and moderate that allow a better management and monitoring of optimal temperatures and humidity.
It must however be said that the layering technique is not suitable for all species; some species are difficult to root while others behave optimally. Among the plants that root quickly and in high percentages we remember the pomegranate, the ficus, the olive. In contrast, most conifers do not root with this technique except in rare cases.