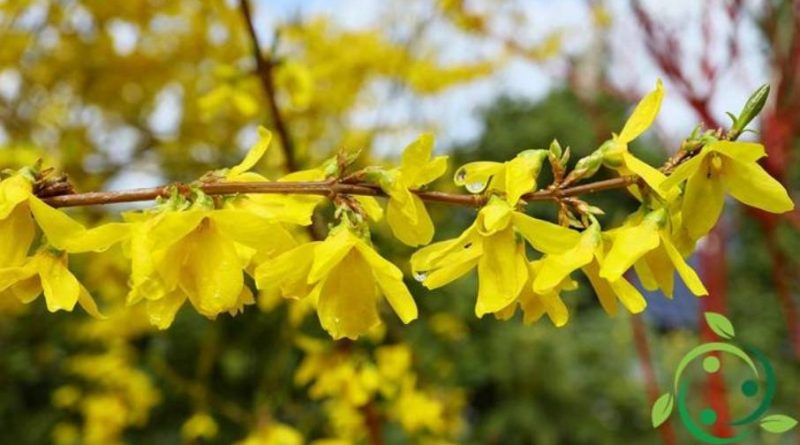 How to cultivate Forsythia

Forsythia belongs to a genus of plants (Forsythia Vahl) of the Oleaceae family, many of which originate from East Asia (China, Korea and Japan) and with a single species (Forsythia europaea) native to the Balkan peninsula.
In this card we will see how to cultivate the Forsythia, following the most useful agronomic measures for this kind of plants.
These plants are mainly deciduous shrubs that reach a height varying from 1 to 3 m. They bloom at the end of winter before the release of the leaves, covering themselves with sulfur-yellow flowers. The flowers are gamopetal, consisting of a corolla of 4 lobes and a small calyx, with very deep lobes. The leaves are opposite, oblong or rounded, sometimes serrated. The fruit is a multi-stop capsule.
In European countries the Forsythia are cultivated for pure ornamental purpose; while in eastern countries these plants are also cultivated for therapeutic purposes.
For the cultivation of this plant remember that the Forsythia is a very rustic plant, which does not fear the cold; for its plant it is necessary to choose a sunny or half-shaded position, and it adapts to any type of soil, even if it prefers the soft ones, rich in humus and well drained, as it likes little situations of water stagnation.
Due to its rustic nature and the characteristics of its root system, Forsizia is able to grow and flourish even with the only water supplies of rainfall, even if in the summer period some rescue irrigations give greater vigor to the plants.
This plant can also be grown in pots; in this case it requires, even if sporadically, periodic watering, especially in the summer period. We remind you that every year pot cultivation must guarantee repotting in order to allow the root system to grow properly. For this reason, at each repotting the dimensions of the container must increase by a few cm in diameter.
The most abundant irrigation must be performed only after planting, to allow a good deepening of the root system.

As far as propagation and multiplication of Forsythia is concerned, this occurs mostly from semi-woody cutting, which can be obtained by cutting the branches after flowering, from spring to early summer, or winter, from November to the end of January.
Subsequently, the cuttings obtained, should be placed to root in a substrate composed of peat and sand and, once the roots have sprung up, the new plants can be planted.
For the propagation of this plant it is also possible to work by layering; in this case you have to choose a long and flexible branch of the plant, fold it up to the ground and cover it with soil, allowing the upper part to emerge; to avoid that the branch comes out of the ground due to its elasticity, you can help yourself with a stone placed on the curved part in the ground.
Once the root system has appeared and formed, the branch can be cut just before the roots. The young seedling can be planted in the ground or in a vase.
Forsythia is a plant suitable to be cultivated as an isolated specimen but also to form hedges that will flourish abundantly.
As for phytosanitary aspects, Forsythia is a fairly resistant plant; the only problems can be represented by the radical rots that must be avoided with very permeable and loose soils and by aphids and cochineals in the early spring periods.
For the fungus, in addition to the care in choosing the substrate, in the event of a slight attack, the affected parts must be cut and the trunk collar disinfected with specific products. In the case in which the plant is seriously attacked, it is good to eradicate it, to prevent the fungus from spreading, and treat the soil with sulfur-based products, which will guarantee the plant also by attacks of powdery mildew (mal white).
For entomological attacks it is advisable not to use fertilizers based on nitric nitrogen but only organic substances (obviously, mature manure is excellent). Nitric fertilizers infect the vegetated parts of the plant excessively, making it much more vulnerable to attacks by insects and other pests.