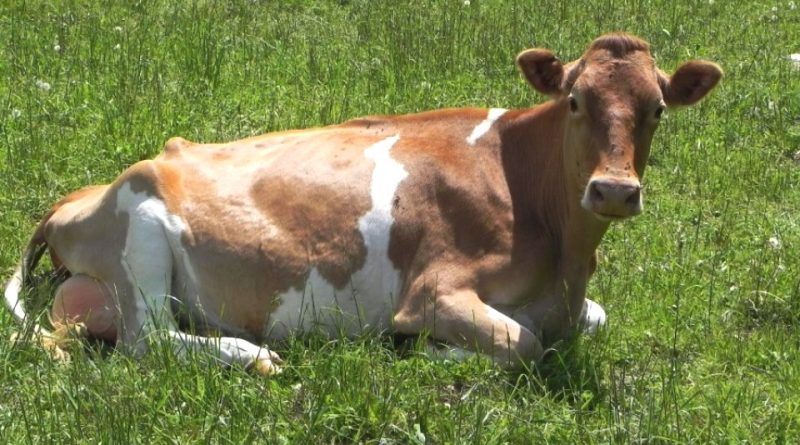 Guernsey is a dairy cattle breed (Bos taurus Linnaeus, 1758), bred in Great Britain and other countries.

Geographical and area distribution –
The Guernsey cow is a breed that, although it originated on the small island of the same name in the English Channel, is nowadays widespread not only in Great Britain, but also in several other countries, including: France, Scandinavia, North America and Australia, New Zealand, South Africa and South America.

Origins and History –
The Guernsey Cow is named after the Isle of Guernsey, a small island in the English Channel off the coast of France, from where the breed originated. The Guernsey comes from Fromentini cattle in French Brittany and from Norman breed subjects introduced on the island around 1000 AD. Later, from the 18th century onwards, it began exporting to Great Britain and other countries. It is a breed that adapts well to all environments, even to very cold ones.

Morphology –
Guernsey is a small-medium sized breed of cattle. Females have an average height of 130 cm, with a weight that normally fluctuates between 450 and 500 kg; the males have an average height of 135 cm, with a weight that fluctuates between 600 and 700 kg. The mantle is light fromentino but also dark or cherry red, with the presence of irregular white patches especially in the lower part of the trunk.
The bow of the tail is light or almost white from. The mucous membranes and the skin are fleshy yellow and the short horns and generally facing upwards.
The limbs are thin but robust and, in general, the animal is angular with flat or concave profiles. The Guernsey cow has excellent lactose characteristics and excellent udder.
These cattle have a gentle nature and excellent grazing skills; moreover, the breed adapts well to warmer climates and rarely produces recessive genes.

Production aptitude –
The Guernsey cow produces a milk with a high butyric content, rich in proteins, with a good supply of beta-carotene and, above all, they need 20 to 30 percent less food than the large dairy cattle. So great breed in converting food into milk.
In general, therefore, they have excellent quantitative and qualitative dairy capacities for fat and protein.
These cattle, on the other hand, have a poor aptitude for meat, good precocity such as somatic and sexual development, good fertility, without particular problems with childbirth and it is a very long-lived breed.
This breed is called the “Golden Butter” due to the straw-white color of the milk.