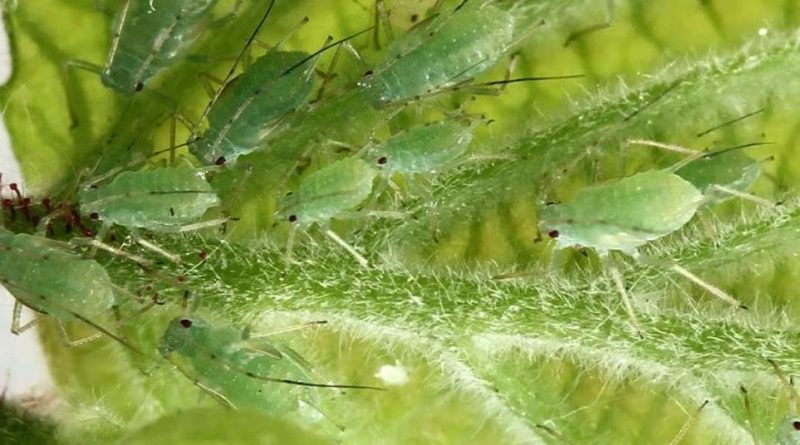 The yellowish-green (Corylobium avellanae (Schr.)) Is an insect reconquer moth belonging to the family Aphididae.

Geographical Distribution and Habitat –
The yellowish-green of the hazel is a widespread insect in the areas where the hazel is cultivated. It is present above all where cultivation is more intensive, as in Europe or in the United States (especially in Oregon where it is more recently introduced) and normally, in balanced ecosystem conditions, its population levels do not represent a problem for the hazel .

Morphology –
The Adult Corylobium avellanae is an aphid 1.7-2.9 mm long with a globular shape, with a complexion that oscillates from light greenish-yellow to lightly pink and has two long siphons. Its coloring is very close to that of the plant’s organs – twigs and petioles – and this makes it difficult to detect its presence. The back is granulated with numerous small cuticle structures and 6-8 conical tubercles per segment. The antennae are pale in color with the darker end.

Attitude and biological cycle –
The yellowish-green is a monogonic species that spends the winter in the state of black egg laid at the base of the buds that will bring in the spring the feminine flowers of the hazel. There are many annual generations.
This insect mainly affects the hazelnuts and their domes and feeds on young stems and, in some cases, hazel leaves.

Ecological Role –
Corylobium avellanae generally does not cause significant damage to hazel groves, especially where cultivation techniques safeguard natural habitats and are conducted with ecological agro-criteria. In the case of greater populations of these insects, however, damage may occur which, in addition to the removal of sap for feeding bites, consists of the abundant production of honeydew which causes asphyxia, burns and favors the establishment of the fumaggini.
In these cases the attached organs are not deformed but strongly wrapped by an abundant honeydew and by the fumaggine; in particular the hazelnuts and their domes are affected. It can also happen that the caliber of hazelnuts is compromised.
Its trophic activity is aimed at the nutrition of young stems and, in particular conditions also of hazel leaves. This results in a loss of nutrients. Photosynthesis can be reduced due to the growth of black smoke on aphid honeydew excretions. Reduced photosynthesis can lead to substantial long-term crop losses. In the case of large populations of aphids, which feed on parts of the hazel plant, it is possible to have a premature fall of the nuts and a lower quality of the same.
The green aphid of the hazel, under ordinary conditions, is controlled by a series of natural predators and, given that the agro-ecosystem of hazelnut trees is often characterized by relative stability in space and time, even in very intensive cultivated areas, the biocenosis They are very similar. Among the natural enemies there are: Anthocorid shellfish, Crisopidae Neuroptera, Coccinellid Coleoptera and others that manage to control populations of phytophages; for this reason, as a rule, no interventions are performed. In particular the Corylobium avellanae is parasitized by the braconide Praon dorsale and by other parasites typical of some ecosystems.