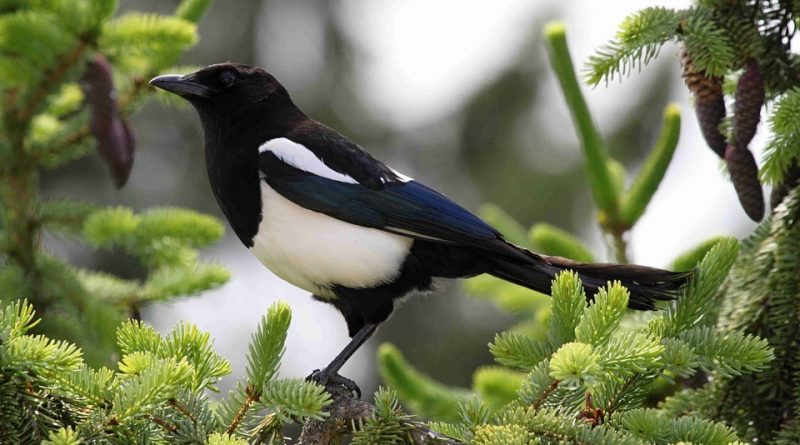 The magpie, also known as the Eurasian magpie (Pica pica L., 1758) is a bird belonging to the Corvidae family.

Geographical Distribution and Habitat –
The magpie is a bird with a Palearctic distribution, so its presence includes Europe, Asia north of the Himalayas, northern Africa and the northern and central area of ​​the Arabian peninsula. It generally occupies a vast area extending from the Iberian peninsula to the Korean peninsula, through the British Isles, Fennoscandia, Central, Southern and Eastern Europe, European Russia, the Caucasus, the Near East (Turkey, Kurdistan, Mesopotamia, northern Iran and Zagros Mountains), Turkestan to north-western Uyghistan, northern Afghanistan and Pakistan, Kashmir, Mongolia, and Manchuria, as far south as northern Vietnam, Laos, Burma and Assam, through much of central and eastern China, eastern Tibet and Bhutan.
Other disjointed populations are also found in Kamchatka, in the coastal area that goes from the south-west of Morocco to northern Tunisia and in the Saudi province of Asir.
The magpie is present in Italy with its nominal subspecies in the whole peninsular territory, in Sicily and in the neighboring islands, while it is missing from Sardinia and Corsica. 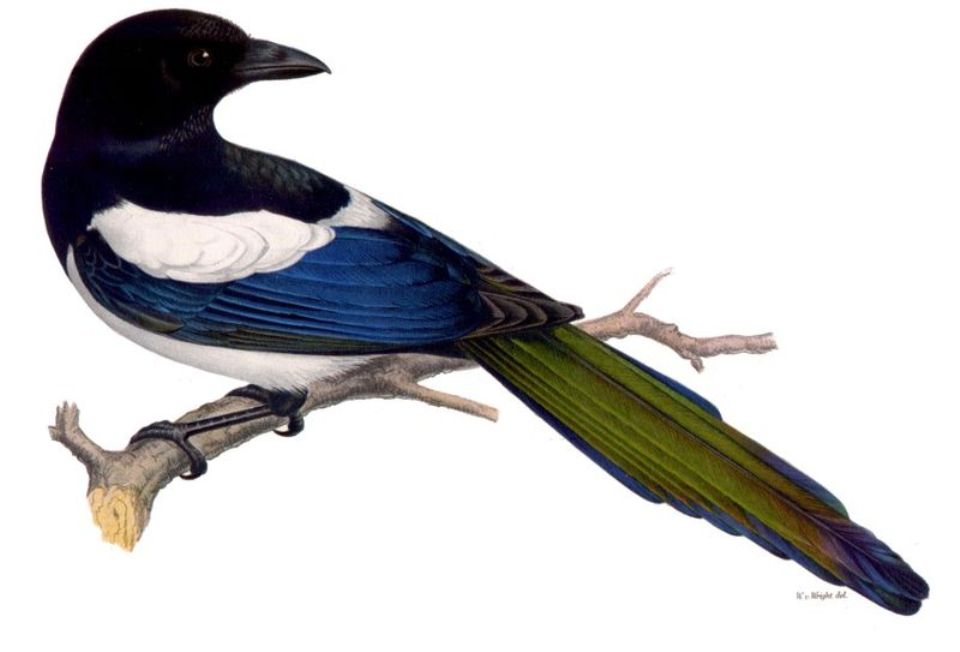 Description –
The magpie stands out for having 46–50 cm in length, of which half the length is due to the tail, with a weight that fluctuates between 160 and 270 g, a wingspan of 52–62 cm. The species has a certain sexual dimorphism so that, with the same age, the males are more massive and heavier than the females. These birds have a somewhat slender shape, with a rounded head with a long and strong conical beak with the extremity hooked; the wings are long and typed, the tail is long with a rhomboid shape and strong legs.
The plumage is black silky on the head, the upper part of the chest, the back, the codion, the undertail, the lower abdomen and the feathered part of the legs; on the head, wings and back there are metallic reflections ranging from bluish to purple; the flanks, the scapular area, the remaining part of the chest and belly, rump are instead pure white; the wings are black, with gray-white primary remiges with steel-colored reflections and a thin black edge; also the tail is black, with evident bronze-greenish metallic reflections.
There is no obvious sexual dimorphism while magpie populations exist with slight variability of livery. The magpie’s crow is spurting and composed of the same syllable repeated 3-7 times, with increasing intensity depending on the excitement of the animal: these birds they are also able to mimic the sounds of the environment around them, including the human voice.

Biology –
Pica pica is a diurnal bird that, except for its breeding season, lives in pairs or small family-based groups, spending most of the day moving from the trees, where it lives, to the ground, where it gets food.
These birds are settled in their territory, where they actively defend themselves from any intruders who are annoyed with beatings and pursuits until they have left the territory of the couple. Males tend to occupy their territory for life, while females can move between the various territories in search of new companions.
The magpie is a bird that has a relationship between the size of the brain and the total ones very close to that of cetaceans and apes, making these birds in general among the most intelligent animals of all. Indeed the magpies have complex social rituals , which highlight the presence of social cognition, imagination, episodic memory, self-awareness.
As for the breeding season, this begins with the first spring warm, with a peak of nesting in April, although in the case of mild winters the deposition can take place as early as December.
The magpies form monogamous pairs that last for many years, even if the females can abandon the partner to mate with a stronger male. Mating begins with the courting of the male; this is manifested by movements of the tail, which is raised and lowered, explained in a fan and quickly closed under the eyes of the beloved; at the same time the male emits low flute chirps and, at the same time, ruffles the white feathers of the sides to cover the black of the wings, showing as much as possible the white of the sides and back; to this ritual the females give great importance, choosing as companions the males with intact tail, as it represents a sign of strength.
As for the nest, this is quite bulky with a strange spherical shape; it is built by both sexes towards the top of a large solitary tree. It is recognized as it is formed by a basal cup-shaped part, made from a weaving of twigs and mud and lined internally with a layer of thin strands of grass, and by an upper cap, made up of twisted twigs.
The female lays from 3 to 10 eggs which are small, of a bluish color with fine brown-olive spotting, which hatches alone but nourished and protected by the male for 21-22 days.
The young will be fed by the female only with the food provided by the male for the first 7-10 days of life: at this point, they have their eyes completely open and are covered by a sparse duvet, and are also primed directly by the male.
The little ones will be ready to fly at 4 weeks of age but will remain with their parents who will feed them, even if in a more sporadic manner, for another 4 weeks.
Regarding the survival of the young, on average only a quarter of the newborns exceed their first winter.
The magpies in natural living conditions live around 4-5 years but in some cases they can reach up to 20 years and over. Sexual maturity is one year old and the first mating is not before two years.

Ecological Role –
The magpie is a bird that lives on the edge of the man-made areas for finding food; they often nest on trees at the limit of fast roads to feed on the animals invested, as they often rummage in garbage bins or open their beaked sacks to extract food scraps. For this reason they often stabilize in parks and gardens and benefit from human presence.
However, these are sedentary birds, which rarely move more than 30 km from the place where they were born: it is mainly the females that move, looking for a partner, and the young who go to create new nuclei. Resident birds Scandinavian and northern populations in general can migrate south during the autumn to winter in less rigid places.
The diet of these birds is omnivorous and very opportunistic and also variable according to the place they choose to live. In general, this is made up of everything that the animal is able to find in its territory. The magpie feeds on grains, seeds, nuts, acorns, berries and fruits, but the bulk of their diet consists of invertebrates (especially beetles and spiders), carrion, eggs and nestlings of other birds and small vertebrates. For this reason they play a notable contribution in nature also in the control of small animals and in the elimination of the remains even of larger animals.