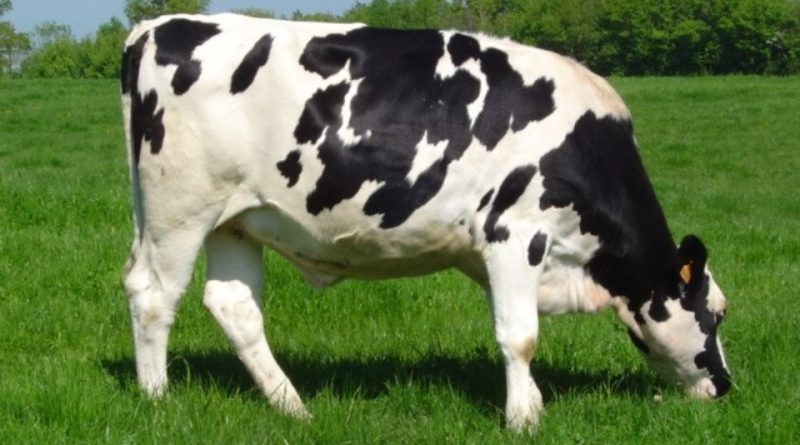 The Frisona is a dairy breed of cattle (Bos taurus Linnaeus, 1758) which has become a cosmopolitan breed through various local stocks.

Geographical and area distribution –
The Frisona breed is a cosmopolitan breed of cattle which, as the name suggests, is native to the Friesland region, between the Netherlands and Germany; subsequently, through different selections and improvements, it has spread in various countries of the world with strains with characteristics, from time to time, that differentiate some aspects. It is especially widespread in Austria, Canada, Finland and countries in north-eastern Europe, France, England, Israel, Italy, Holland, Sweden, Switzerland and Germany.

Origins and History –
The Friesian breed is native to the region of Friesland, a region particularly suited for dairy cattle breeding, thanks to the mild climate, which allows the growth of the pasture and more generally for the forage essences present in most of the year.
Its origins date back to 1200-1300, with the passage of time it began to be understood that this animal could obtain a breed with marked dairy skills. In the second half of the 1800s the spread of the Friesian race began in all the countries of the world and each of them undertook its own selection. Initially, in Europe, the breed had a dual aptitude, with a 50% milk and 50% meat production orientation and subsequently selected in the different stocks of the countries where it is bred.
In the USA the selection was based only on milk production, so the cattle took more angular shapes and was called the Holstein Friesian breed in America and Canadien Holstein Friesian in Canada.
Today the European strains no longer present a dual aptitude but have also taken on the typical characteristic of a specialist dairy breed, as they have been crossed with the Holstein Friesian and Canadien Holstein Friesian strains. Usually in this area the farming system it is semi-intensive and the animals are led from the stables to the pasture and vice versa for most of the year. From the beginning the outward appearance of these cattle has been that of harmonious and vigorous animals, with good transverse diameters and with an excellent abdominal capacity.
The valuable results obtained by Dutch cattle are historically attributable to the use of improving or preferent bulls, which have been identified since 1910 by progeny test or comparison between mother daughters. The Dutch Friesian arrived in the United States in 1621 in the wake of the Dutch colonists but was subsequently exterminated by an epidemic of pleuropneumonia. Imports resumed in the second half of the 1800s and continued by creating a genetic base of about 8,000 subjects on which the selection of the Frisian American stock named Holstein Friesian is based.
The origins of the Italian Frisona derive directly from the Dutch and North American origins. The first imports date back to 1870.
The forefather of the Italian Friesian breed is the Carnation Producer bull purchased in 1929 at an auction at the Carnation Milk Farm in Seattle (USA); subsequently the breed was reborn with other elite breeders of American and Canadian origin. Since 1950 the Frisona increasingly replaces Bruna, especially in the plains. Since 1956 the breed has its own physiognomy and a single national genealogical book (Frisona Italiana) is established. The most widespread area is Northern Italy, in particular Lombardy and Emilia-Romagna. On 23 July 1957 the National Association of Bovine Breeders of the Italian Friesian Breed was established (A.N.A.F.I.).

Morphology –
The Frisona breed is characterized by a lively and nervous temperament. Characteristic of the breed is the size with areas of white and black pigmentation that alternate on the mantle and are usually clearly outlined with respect to each other. Within the Frisona breed we have the red spotted stump (a character that derives from a recessive gene) that can be registered in the Free Genealogy.
Morphological evaluation is expressed for all females who have given birth and for males over 18 months. The average length of pregnancy is 287 days.
The characteristics of the Friesian cow are: – black spotted or red spotted coat. High stature, with height at the withers of the adult specimens of 155 cm and even more. The head is expressive, proportionate, distinct and vigorous, with a straight upper profile; bright eyes, very mobile ears, wide nostrils and wide muzzle and strong jaws. The front is harmonious with an elongated neck, thin and rich in skin folds; withers well tightened, pronounced and sharp; shoulders merged with the neck. The chest is strong and broad. The front limbs are perpendicular and well spaced. Strong feet with high soles. The straight backline with wide and strong loins. The long and leveled rump, better if hanging towards the ischia; rather thin tail. The posterior limbs in perpendicular, strong and dry; strong feet, tight with high sole, strong shackles. Buttocks with a straight profile. The hocks are wide and flat, that is clean. The breast is firmly attached, prominent and tortuous abdominal veins, very ramified mammary veins not too large and branched, spongy and elastic tissue. Strong median suspensory ligament which clearly divides the breast into two equal parts. Nipples perpendicular to the ground, of the right dimensions (about 6 cm), inserted in the center of each quarter.
– In general the weight of adult females is between 650 and 750 kg, with a height of 130 – 150 cm, annual milk production of 8,000 – 10,000 kg (but with fluctuations relative to the various stocks).
– The bull has the same morphological characteristics as regards the coat, and the other characters, with obvious regard to masculinity which is reflected in a greater bulk and in a greater power of each single part. In general, the weight of the adult male is between 1,200 and 1,300 kg and the height between 138 and 155 cm.
– With regard to calves, these at birth have a weight that varies from 40 kg to over 55 in males. In the first 3 months of life they have a sustained growth, both in height and in weight, equal to 2 millimeters and almost 900 grams per day.
The Friesian calves have a digestive system similar to the gastric mono up to about 50 days of life, to then develop the rumen and begin to derive energy from the forages. They are typically white meat until they stop taking milk.

Production aptitude –
Today the various Frisona strains have a single aptitude for milk production.
The production of milk from the Frisona cow is very high, in fact in a 305-day lactation period it can produce 9,200 kg of milk with a fat and protein content of 3.3%.
The organoleptic characteristics of the milk, even here, are influenced by the characteristics of the various strains, the climate where they are raised, the quality of the pastures and the feeding.
In each lactation, then, the cow produces very different daily quantities of milk, depending on whether it is at the beginning of the production phase (whose peak is reached about six to eight weeks after the establishment of the lactation) or in the middle or towards the end of lactation itself.
On average, a production is calculated on the whole normalized lactation of about 20-25 liters of milk per day (without prejudice to the fact that the cow is in good health and is correctly managed from the food point of view).
Finally, as far as farming systems are concerned, in general they are intensive farming. Also in Italy the breedings of Friesian cattle, in most cases, are intensive. In these cows are in fact bred throughout the year in stables in free housing. The stables used can be of two types: stables with bunks divided into three zones (feeding, exercise and rest with bunks) and stalls with permanent litter where no distinction is made between exercise areas and resting area.