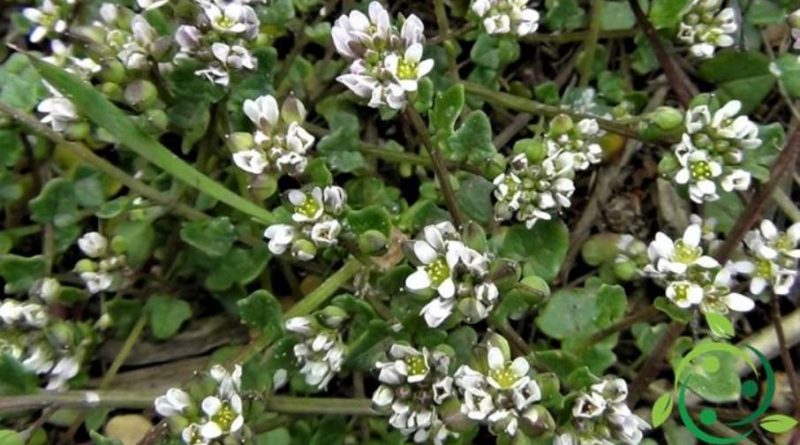 The medicinal Coclearia or simply Coclearia (Cochlearia officinalis L.) is a herbaceous species of the Cruciferae.
It is a small plant that has some typical spoon leaves (from which the name derives) and that in the various dialects is called: grass cocchiara, herb cuciaera, cuchiara rotunda. Also in English it has the meaning of spoon grass: spoon-wort.
The cochlearia is a biennial or perennial glabrous herbaceous plant that has an angular and branched stem, but erect up to about 50 cm. From its base unfold long petioles of oval leaves, whole and hollow as a spoon. The upper ones, on the other hand, are sessile, embracing the crown, oblong and heart-shaped at the base.
When the leaves are rubbed, they release an odor comparable to that of mustard.
Due to its properties and uses, the flowering plant in the fresh state is used to make the most of the concentration of vitamin C, which degrades to air, heat and light. In addition, the plant can be kept no more than two days in an airtight container protected from light.
The harvesting is done by hand and special care is required in the operation in order to preserve the plant, even if it is annual in order to allow the plant to bear fruit and produce seeds to find it the following year. In this plant there are small quantities of oil essential, potassium salts, resins and pectins.

The leaves of this plant are used both for flavoring salads and in herbal medicine.
The essence of cochlearia, besides being anti-scab, as it is rich in vitamin C, which made it used in ancient times on long sailing trips, has also a disinfectant and astringent power; it can be used against skin irritations.
From this plant an essential oil is extracted which, diluted, can be useful to gargle and disinfect mouth ulcers.
Moreover, due to its disinfectant power it can be used as an anti-flu.
It is also supportive in cases of slow digestion or hypochloridria, that is difficulty or slowness in the production of hydrochloric acid by the stomach. But we must be careful not to overdo it as it can cause hyperacidity and go to irritate the intestinal mucosa.
We remind that the antiseptic effect also involves vitamin C, which is thermolabile and hydrophilic. Then it disappears if heated, but is extracted if macerated in water.
If left to soak for at least a week in alcohol, an alcohol dye is obtained; a widely used variant is to leave it in maceration in white wine.
Medicinal Coclearia is also used in cosmetic products; in fact it becomes part of the composition of different creams and lotions, for the most varied applications: from the stimulation to the growth of hair follicles, to anti-free radical creams, to disinfectant gels.
As for the contraindications, it should be remembered that excessive use can cause gastritis.