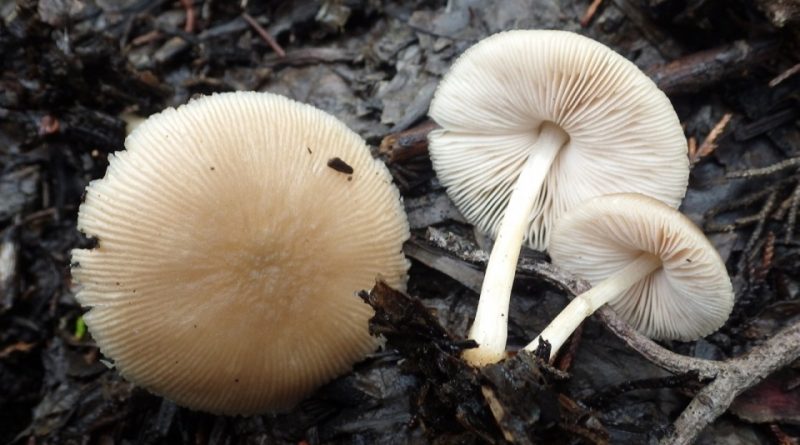 Etymology –
The term Pluteus comes from plúteus shelter, shelf: for the shape of the carpophore. The specific epithet plautus derives from the Latin, broad, flat, with flat feet, referring to the base of the stem that ends with a bulb.

Geographical Distribution and Habitat –
The Pluteus plautus is a lignicolous fungus as it grows on twigs and trunks of wood mainly of broad-leaved, but also of conifer.

Recognition –
This mushroom is recognizable by its hat, which is about 5 cm in diameter, convex, slightly bell-shaped, then more open, with very variable-colored cuticle, from white to cream, with the darker central part, in all shades of brown, also with olive reflections, greyish, while from the middle towards the margin it is always with a light background, with soft pink tones and decorated with blackish-violet scales.
The Lamellas are dense, intercalated with lamellulae, detached from the stem, whitish to pink in color.
The stem is 4–6 cm, cylindrical, fibrillose, curved, concolorous to the cap.
The meat is white in color, small in odor or zero or very light with a rafanoid note.

Cultivation –
Pluteus plautus is not a mushroom cultivated also due to its edibility which is considered by some to be mediocre for other inedible authors.

Uses and Traditions –
This mushroom can be mistaken for Pluteus umbrosus (Pers .: Fr.) Kumm., Which is distinguished however by its medium-large size, by its dark brown cap and stem, by the thread of the brown lamella; furthermore, in the microscopic analysis, for the caulocystidia formed by exclusively claviform elements and for the hyphae of the pileipellis exclusively elongated and not with two different types (elongated and enlarged) as we find in P. plautus.
This fungus is reported by some authors as edible while others are not edible but non-toxic.

Preparation Mode –
Due to its dubious edibility and, in any case, certainly not valuable, we do not recommend any use in the kitchen.