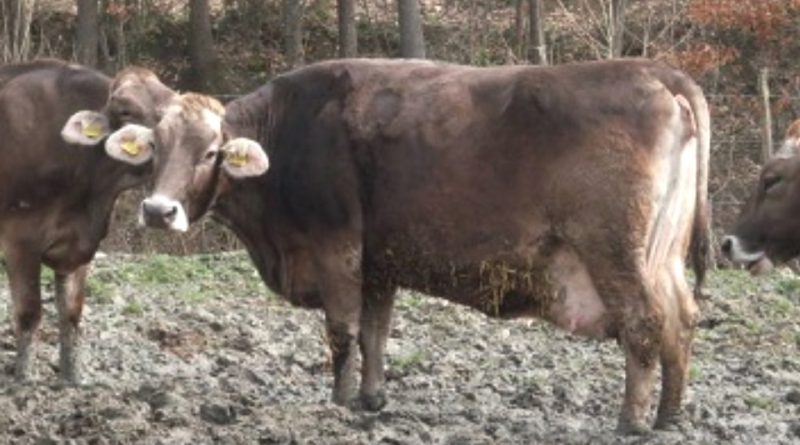 The Italian Bruna is a dairy cattle breed (Bos taurus Linnaeus, 1758), bred in Italy that represents the Italian breed of the Bruna Alpina breed.

Geographical and area distribution –
The Italian Bruna is a breed that, due to its peculiarities, is bred, for the greatest number of farms, in particularly deprived areas of the mountains and hills of the Apennine and alpine areas of Italy. In recent times, however, thanks to the improved aptitude to milk, even breedings of a certain importance use this breed.

Origins and History –
The Bruna breed bred in Italy is, in fact, the Italian breed of the Bruna Alpina breed. This breed originated with the introduction of Swiss, Austrian and partly Bavarian subjects, adapted to our environments and, especially in recent years, reborn with the American Brown Swiss stock.
This breed has been present in Italy since the 16th century and until 1981 was regularly called Bruna Alpina.
This breed was originally threefold; with the diminished necessity of working in the fields, it became a dual aptitude (milk, meat) and finally it specialized in recent times in the mere aptitude of milk, thanks to the crossbreeding of rightly with the American Brown Swiss.
The specialization was carried out because this breed, due to the introduction, above all of the Frisona, had been considerably reduced. This led to 1957 when the National Association of Breeders of Italian Bruna Breed (A.N.A.R.B.) was founded.
Today the name of this breed, due to its specificity, is Bruna Italiana and no longer Bruna Alpina.

Morphology –
The Bruna Italiana bovine breed is characterized by animals with harmonious conformation. Their coat is uniform in color, with brown shades or variable from the little sister to the chestnut. In bulls the coat is darker, with a chestnut color.
The musello is of slate color surrounded by a white halo. The horns are fine and white at the base and black at the tip.
The live weight of this breed is between 550 and 700 Kg.

Production aptitude –
The Italian Bruna is a bovine breed with a good production of milk and of remarkable quality. There are much higher than average yields for cheese making, particularly suitable for the production of typical cheeses and, recently, also with good yields in quality meat and with great capacity to adapt to the most varied agricultural environments.
The average Italian production per lactation is 7,425 kg (production increase of the breed over a decade is on the order of +100 kg of milk per year), with 3.59% of protein and 4.05% of fat . Based on the statistics published by the National Breed Association (Anarb), the 20 best Bruna breeders not only have average productions of over 11,000 kg, but the average percentage of protein rises to 3.79%. This data provides a measure of the potential of Italian Bruna with remarkable precision: the best breeders produce more milk and are richer in protein. In fact, the genetic potential in protein stocks in Italian Bruna is very high and the best breeders reach levels of considerable value and worthy of attention. The Italian Bruna cow is included in many high-yield dairy farms to be able to touch up, in a positive sense, the percentage of protein in the mass milk delivered, in order to reach the minimum percentages that the EU and Italian regulations now rightly prescribe for the milk products.