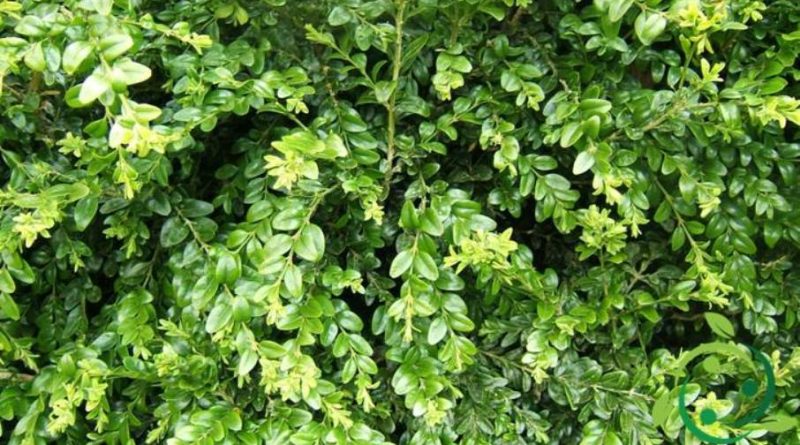 How to cultivate the common boxwood

The Common Boxwood, Mortella or Bossolo (Buxus sempervirens L.) is a plant of the Buxaceae family, which grows spontaneously in the arid, rocky, predominantly calcareous areas of Italy and originating in Europe, North Africa and Western Asia.
In this card we will see how to cultivate the Common Box with the most useful agronomic techniques and tricks.
The Common Box is an erect and bushy evergreen shrub with a variable height between 2 and 4 m, long-lived, with a characteristic odor, with strong anchoring roots, an enlarged stem at the base, tortuous and branched, thick foliage. The bark that is at first smooth and greenish, over time takes on a gray-whitish color, has medicinal properties.
It has opposite leaves that are persistent, sessile or briefly petiolate, dark green in color on the upper side, lighter on the bottom, ovoid, oblong or rounded, with the smooth margin except for the apex.
The flowers are unisexual, small, united in axillary glomeruli, the central flower is generally female, the peripheral ones are male; they are rudimentary flowers without a real corolla, the chalice is formed by 4 lacinias, which surround the stamens in the male flowers, and in the female ones the only pistil with ovary exceeding, ovoid and surmounted by 3 large stigmas. The male and female flowers of the glomerulus are inserted directly on a glandular formation, which is a pyramidal-shaped nectary, the plant generally flowers from March until May.
The fruits are in obovoid capsules (7 mm), coriaceous; 2 seeds per nock, stingrays, blacks and transparencies.
The Common Boxwood adapts to the arid and rocky areas and prefers the alkaline and well-dye soils. It is a rustic species that grows well everywhere and bears cold well up to -17 ° C, it is also a very long-lived plant that can live up to 600 years.
For the cultivation of the common boxwood it is possible to choose both an exposition in full sun and half-shade. Obviously if we live in a particularly hot area it is better to opt for the partial shade but, due to its rusticity, the plant grows even in totally shaded areas.
The boxwood does not need particularly abundant watering, although in particularly dry periods of the year it may occasionally need water; the water supplied by the rains is usually sufficient.
Before planting, however, to give more vigor to the plant, it is good to bury a small amount of organic fertilizer at the foot of the plant, in autumn and at the end of winter.
In any case, planting rarely creates problems, even when it comes to large plants, as boxwood tends to create a very dense network of roots and therefore greatly increase the absorption surface, reducing recovery times.
It is good however that the subjects of considerable size are planted with earth bread.

The small ones, on the other hand, are usually sold bare-rooted.
For the plant, as mentioned, it is advisable to proceed in the autumn period so that the plant has all winter to create new roots.
Proceed by digging a hole twice the size of the earth bread; if we are in the presence of too compact and heavy soil it is good to create a drainage layer with gravel; then proceed with organic fertilizer, after which, after having covered it with a bit of soil, the plant can be planted. Finally we cover with the remaining soil and press well.
To create borders that are not very high and to be formed in a short time it is good to plant each plant 20 cm from the other. If instead we want to create a high hedge, the ideal distance between the subjects is 60 cm.
As far as the multiplication of the Common Box is concerned, one can start from seed, to be used as soon as the fruits dry, at the beginning of autumn, sowing in a mixture of sand and peat in equal parts. However, as the boxwood is a very slow-growing plant, it is difficult to sow, most often to propagate it, cuttings or layings are taken in spring, which must be kept in pots even for 2-3 years before being planted.
Now let’s see the pruning. We immediately say that boxwood bears pruning very well and for this reason it is one of the most used plants for the creation of hedges, barriers or for topiary art. Pruning is one of the few interventions that it requires, even if it is not as assiduous as on other plants because it has a very slow growth. This operation is performed twice a year: in spring and early autumn (but not always necessary). Furthermore, in the case in which the bushes are particularly old and have been neglected, it is possible to intervene during the month of May with a severe pruning that has the purpose of rejuvenating the whole. In the early years some more frequent intervention may be necessary to favor a good branching and filling of the spaces. This operation can be performed with simple scissors, except that, in the presence of long hedges, an electric hedge trimmer is not necessary, which allows faster and more precise work.
Recall that the boxwood can also be cultivated in pots; in this case it is good to choose a vase with large drain holes, perhaps in terracotta (since it allows perspiration). In addition, a draining layer, often made of clay, gravel or cocci, must be created on the bottom. Finally, let us remember that boxwood is a plant very resistant to aphids and cochineals, the more the plant is kept rustic and thus avoiding fertilizers based on nitric nitrogen; otherwise the softening of the leaves causes a greater susceptibility of the plant to the attacks of these insects. An insect that, unfortunately, has spread in recent years is the box borer (Cydalima perspectalis). The larvae of this insect feed on the leaves, bark and twigs of the plant. In a very short time they can cause a vast desiccation: the leaves and branches, first green, turn to greyish yellow. If you notice the presence of the insect at the larval stage only, it is possible to intervene also with products with a lower environmental impact such as those based on bacillus thuringiensis or pyrethroids.
A final warning: care must be taken in the presence of children and animals. In fact this plant is poisonous in all its parts. May cause vomiting, problems with the digestive system and dermatitis.