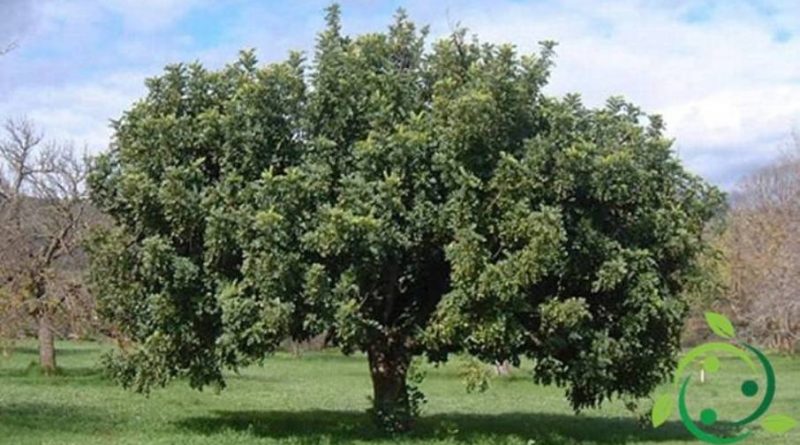 How to prune the carob tree

The Carob tree (Ceratonia siliqua L., 1753) is a fruit tree of the Fabaceae family. It is a predominantly dioecious plant in that there are plants with only male flowers and trees with only female flowers, while more rarely they present flowers of both sexes on the same plant.
In this card we will see how to prune the carob taking into account that, in addition to its characteristics of difference between male and female plants and plants with flowers of both sexes, one can have flowers, fruits and leaves on the same carob tree, being an evergreen plant and with very long fruit ripening. Another important feature of the Carob is that its growth is quite slow, with a very high longevity, which easily reaches up to 500 years.
When planting a carob tree, consider that tens of generations will see it after you; a way to leave something very concrete to our children’s story.
Because of its longevity and slow growth the most important pruning intervention is the initial one; setting a balanced crown in the first years of life means obtaining a well-shaped, unbalanced plant that could have stability problems then in old age.
For this reason, the first pruning of the carob tree begins immediately after the planting of the plant. Pruning, as mentioned, is fundamental, even if it is a fruit tree bred with a natural shape, as it will be precisely this that will determine the whole life (and also the aesthetic aspect) of the plant.
It should be remembered that the carob forms of cultivation take into consideration the natural bearing of the plant. The wood that characterizes this species becomes particularly gnarled and twisted especially over the years.
In addition, according to the plant’s tendency to grow according to its natural tendency, the most commonly used forms of farming are: a free pot or a bushy pot.
Furthermore, the type of farming must take into consideration the type of harvest. Generally the total drop of the fruit is expected by collecting them as they ripen but this is not always possible especially for the product destined for the industry. Mechanized tools are used for industrial collection, so the training system must take into account the height for the landscape of the vehicles; we therefore choose to raise the hair quite high.
Therefore, for the pruning of the Carrubo, the main objective is to favor the development of the central axis. To this end, in the first years of development, the growth of the central jet will be given free rein, by making short cuts on the branches along the trunk and eliminating the lower branches.
In the free vase form a very high trunk must be obtained; thus the main stem is raised up to a height of around 1.5 m, after which the main branches branch off. This is the shape that best respects the natural appearance of the plant. The first operation therefore consists in a cut of the main beam at a certain height (we recommend 1.40 – 1.50 cm) leaving at that point the branches that will give rise to the entire crown. Here too we can proceed by leaving 3 or 4 branches but for the size of the plant in the future we recommend the choice of 4 branches in order to give greater stability and distribution of the entire crown on 4 instead of on three branches. The branches must have an inclination with respect to the ground of 60 ° and distant from each other (in the case of the options with 4 branches) with a 90 ° angle.

Preliminary operations must include the removal of branches that grow too low below the point where the branches are to be developed. After that the ramifications will grow undisturbed, initially guiding the trunk through the endowment of a wooden stake.
The development must be left free until the first fruiting, after which the branches formed by two years of age will be eliminated, favoring the production of new young branches. Performing these pruning operations will push the plant to produce a wider and less developed height crown.
If you want to give more height to the plant, containing the extension of the foliage and raising it in high growth in order to have an easy mechanized harvest, you have to start in the spring from the main shaft, first of all choose 4 branches well spaced and distributed along the axis of the trunk starting from a height of one meter. The weakest branches and those in excess should be eliminated immediately. Instead they leave the branches that are quite healthy, these will then be trimmed in the summer period. If there is not a sufficient amount of branches it is good to leave the less developed ones and later on in the summer.
Subsequently, in the following years, we will proceed to the topping in the summer period of the lower branches in order to favor the development of the branches towards the top.
As for the production pruning, this is practiced starting from the month of April (or first in the southern regions), while in the north it is better to wait for the end of the frosts and postpone it in the second part of spring. Alternatively it can be carried out immediately after collection, eliminating even the damaged branches (if mechanized harvesting with shakers has been carried out).
It should be emphasized that a true pruning of adult trees is not necessary on the carob tree, so that one intervenes sporadically every two or three years. It is important that the most important intervention of the production pruning is carried out in the years in which the season is particularly favorable and you can have a good harvest, abundance of flowers and periods with distributed but not persistent rains. The cuts must cover the upper part of the canopy in the central point, here you will have to allow a good distribution of the branches by removing the very thick ones and bundled together to allow light to penetrate inside. You should never exceed in the interventions chisels in order not to slow down the successive years of production in the plant that would tend to restore the eliminated parts.
Another operation, however, which concerns plants that are already adult and formed, is renewal pruning.
This technique consists in removing the damaged and too wasted branches to support the growth of further sub-branches. In this case the first thing to do is to thin out the central part eliminating the bundled branches. After that we will proceed with the removal at the base of the branches of 1-2 years of age that grow vertically on the branches. At the same time, damaged branches will be cut down to healthy wood, while those that are wasted will be removed at their intersection.
In every cut, above all on specimens of advanced age, it will have to be affixed to the protective mastic. Finally a note on the green pruning. This technique is carried out every two or three years only on adult plants that have already assumed their final shape and have entered production. In this case the cuts must concern only the forms that must be raised in height, they are toppings on the branches more low as described in the breeding pruning.In all pruning operations remember to use well-sharpened tools and, first of all, disinfected and to use the protective mastic especially if thick branches or branches are to be eliminated damaged by the weather.
We also remember that the cuts on thick branches of the carob tree heal very slowly, so this operation must be performed only if necessary.