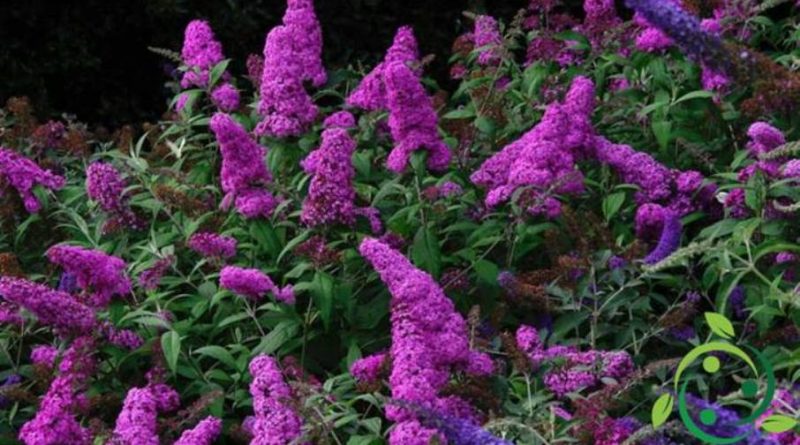 How to grow Buddleja

Buddleja is a genus of shrubby or arboreal plants (Buddleja L., 1753), either evergreen or deciduous, of the Buddlejaceae family that are distinguished by their showy inflorescences whose flowers are gathered in long panicles.
In this card we will see the main characteristics of these plants, of some cultivars and, above all, how to cultivate the Buddleja. For the characteristics of these plants the main use is in gardening for the formation of shrub groups on lawns, against walls, or in the thickets. The introduction of the first species in European gardening dates back to the late eighteenth century.
Due to the peculiarities of their shape the “buddleje” are sparsely arranged as their conformation (more arboreal than shrub) lends itself better to an isolated arrangement. However, these are less demanding plants, which like warm and sunny locations, shelter from freezing winds in loose and permeable soil and require an energetic spring pruning before the vegetative restart to maintain a compact shape to the foliage and to obtain an abundant flowering.
Among the buddleje Buddleja Davidii has a special role, along with its varieties, for the beauty of its blooms and for the attraction it provokes on butterflies. It is a species that previously cultivated in gardens and parks has soon escaped the culture and it is becoming an invasive plant, as it adapts easily to any type of soil, preferring the calcareous one. Currently it is common in Europe where it grows on cliffs and in uncultivated places, flood plains, banks of rivers and lakes, forest clearings, railway embankments, from the plain up to over 1300 m.
It is characterized by dark green leaves, lanceolate and sometimes covered by a whitish down in the lower part, with a flowering period from late June to late October – November.
The flowers are hermaphrodite, attinomorphic, fragrant, very numerous, gathered in cylindrical apical panicles 20-50 cm long. Each flower that can have, depending on the variety, colors ranging from pink to dark purple, and from white to lilac, is formed a bell-shaped calyx with welded sepals shorter than the tube, a long tubular corolla ending with 4 lobes and a species of reddish eye in the center and with 4 stamens inserted in the tube. The flowers give off a slight but pleasant fragrance ranging from the fragrance of vanilla to that of honey. Let us remember that the plant flowers on the branches of the year.

The characteristic, during flowering, of being visited with particular liking by the causes it to derive the vulgar name with which the Anglo-Saxons call it: Butterfly Bush (Butterfly Shrub).
Furthermore, as regards propagation, this occurs for semi-mature wooden cuttings 10-13cm long. in the period of July – August, planting them in a cold greenhouse in a mixture of peat and sand in equal parts. They are then planted in October or March of the following year. The propagation, however, can be easily obtained also from seed, in a warm greenhouse towards the end of winter. As for the cultivation we underline how the Buddleja davidii is easy to cultivate, very hardy to withstand high temperatures and important excursions of several degrees below zero. It also bears frost well, tolerating temperatures down to -15 °. The plant is characterized by a rapid growth, it has numerous underground stolons and an abundant production of seeds (up to 3 million per plant) that the wind can carry far.
Remember that it is a plant that adapts to many types of soil, tolerating even the heaviest soils. It can be grown in a pot (obviously large) in a terrace.
Even if it does not have particular needs with respect to the substratum it is good, before implanting, to place in the hole where a good quantity of organic substance mixed with sand is implanted, in such a way as to favor drainage; this is because the Buddleja loves water when it is in full bloom but stagnation conditions in the cold months can be harmful.
As mentioned, for their cultivation, it is good to choose sunny areas even if they grow well even in partial shade; it is evident that in this last case the flowering will be less.
Since the Buddleja has a fast growth rate, if we want to limit its growth, in March we must cut off the branches of the previous year (those that have bloomed) to the length of 5-8 cm so that they repel new branches that carry flowers; this will allow an abundant flowering. As for adversity the Buddleja is a plant very resistant to insects and cryptogams. It is advisable never to intervene with nitric fertilizers that do not benefit the flowering but only a greater vegetation and, in this case, can attract aphids and scale insects that prefer more tender vegetated parts.
Among the interesting varieties of the Buddleja we mention:
– Buddleja Davidii Purple Prince, purple-purple;
– Buddleja Davidii Fascinating, pink-lilac;
– Buddleja Davidii Empire Blue, blue-purple;
– Buddleja Nanho Purple, of lilac-blue color.