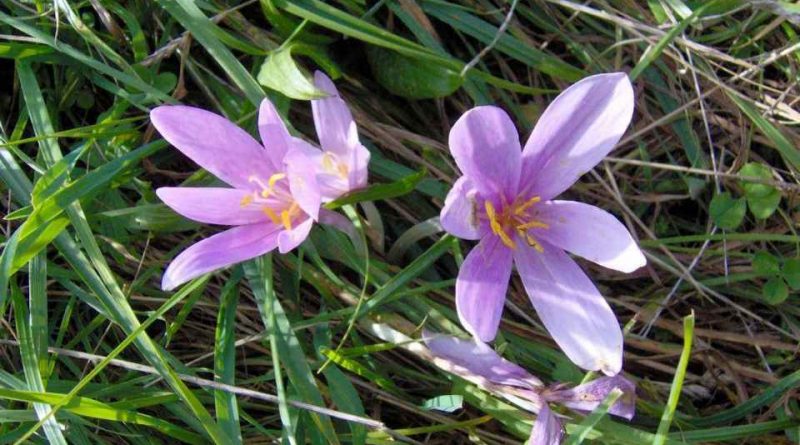 Systematics –
From the systematic point of view it belongs to the Eukaryota Domain, Kingdom Plantae, Spermatophyta Superdivision, Division Magnoliophyta, Class Liliopsida, Subclass Liliidae, Order Liliales, Family Liliaceae and therefore to the genus Colchicum and to the species C. autumnale.

Etymology –
The term Colchicum comes from the Greek Κολχίς, -ίδος Kolchis, -ίdos Colchide, an ancient region of the Black Sea corresponding to today’s Russian Georgia, where the plant, according to Dioscorides, was abundant. The specific autumnal epithet derives from autumnus autumn: autumnal, autumn.

Geographical Distribution and Habitat –
The colchico of autumn is a species with detectable origins in central Europe where it is common both in the central and southern arai (except for the Dinaric Alps) and in the Caucasus. In Italy this species is common in the north and rare in the northern Apennines. It is also present in northern Africa.
Its habitat is represented by meadows, pastures well sprinkled with fresh streams and wooded clearings. Generally these plants live in colonies. On the reliefs it frequents alpine and subalpine grasslands. It grows preferably on both calcareous and siliceous soils with neutral pH, average nutritional values ​​of the soil which must be averagely moist.
The plan is present on the reliefs up to 2100 m s.l.m .; therefore the following vegetation levels attend: hilly, mountain and subalpine. 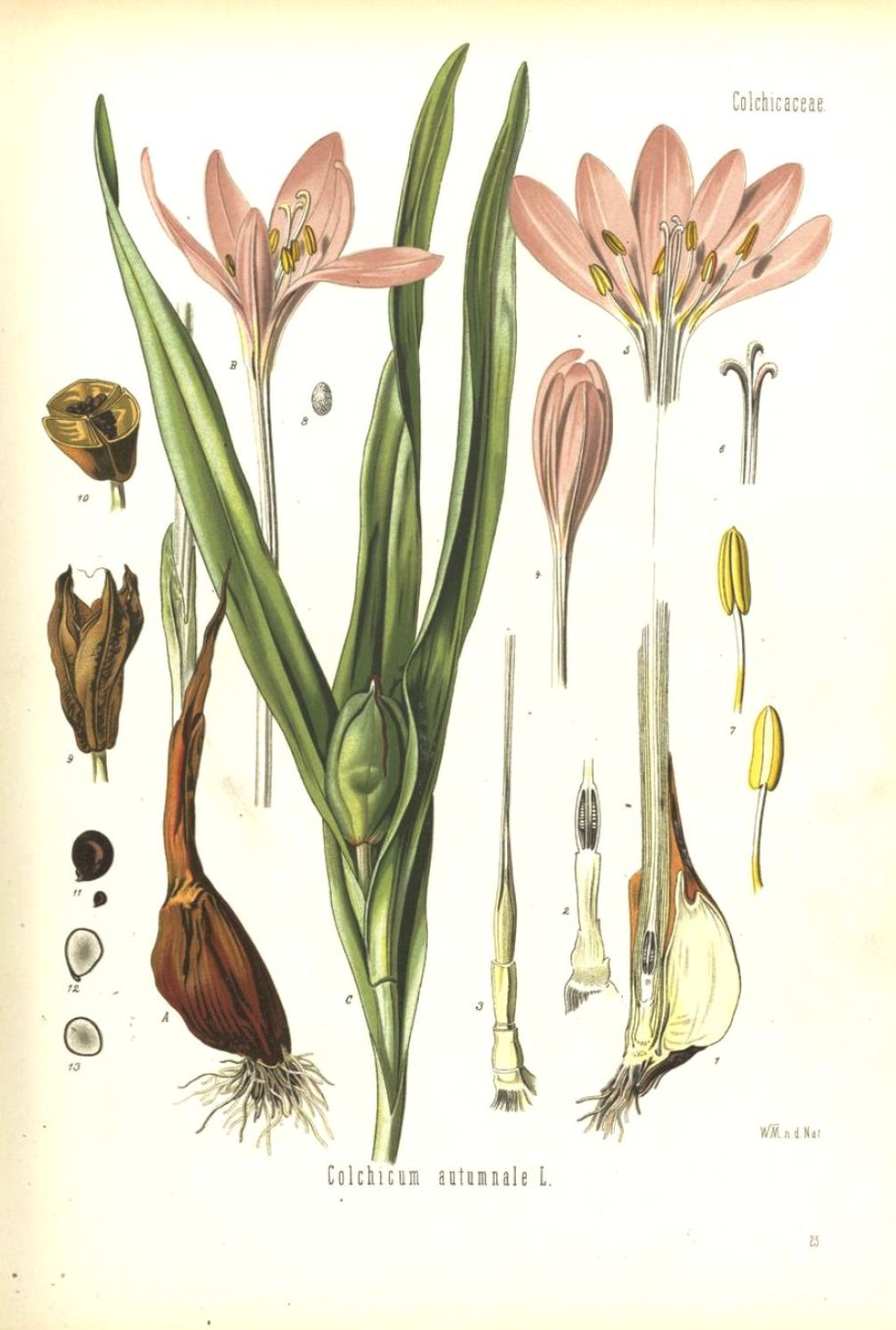 Description –
The colchico is a bulbous herbaceous species whose height varies from 10 to 40 cm. The stem is practically absent: the leaves and flowers grow directly from the root tuber (the tuber can be considered the hypogean part of the stem).
The bulb of this perennial plant has an average diameter of about 5 cm from which, in spring, large leaves of fleshy consistency develop. These are 20 -30 cm long, lance-shaped and light green in color, in summer they dry up completely and then reappear in the following spring.
In autumn from the bulb 4-5 large cupped flowers bloom, generally pink and sometimes even white. The flowers are hermaphroditic, actinomorphic, penta-cyclic (ie they are formed by five overlapping whorls: perigonium with two whorls of 3 tepals, each androceo with two whorls of stamens each and in the most central area the last whorl, the gynaeceum), trimeri (each whorl is composed of three elements). Flower width 30 – 80 mm.
The fruit is a septicid, ovate-oblong capsule, acute at the apex, which comes out of the soil along with the new leaves. The seeds are globose and blackish. The dissemination of these seeds is favored by some sticky substances present on their exterior: in this way the seeds adhere to the legs of the passing animals. Size of the capsule: width 20 – 27 mm; length 34 – 55 mm.

Cultivation –
Autumn colchicum or false saffron is a plant that prefers sunny or semi-shaded areas; it does not fear cold and cold temperatures. The plant adapts to any type of soil, preferably rich in organic, soft, deep and well drained substance. As for the water requirement, being a bulbous it is resistant to drought and is generally satisfied with the rains; if grown in pots it should be watered only when the soil is completely dry.
The autumn colchico, like all other bulbous plants, propagates by division of the bulbs. In autumn, after flowering, the cloves separate from the mother bulb and are buried, in groups, in holes twice as wide, always with the apex facing upwards.
If cultivated in pots, the repotting is carried out every year as the colchico bulbs, reproducing and becoming swollen, tend to occupy all the available space.
For the details of the cultivation technique, see the following sheet.

Uses and Traditions –
The properties and qualities of Colchicum autumnale were already known in antiquity and in ancient Greek medicine it was indicated to cure arthritis. From the early seventeenth century, the plant is inscribed in the English pharmacopoeia.
It is an autumnal, poisonous plant, with showy pink-violet flowers that is easy to find in rustic or alpine gardens, both for the delicate beauty of its flowers and for its flowering period, autumn, when most of the other flowers has already done their cycle.
Colchicum autumnale is a poisonous plant due to the presence of colchicine, a highly toxic alkaloid (among the various effects it prevents the formation of the mitotic spindle in the cells and therefore favors the polyploidy) contained above all in the seeds of the plant, but also in the bulb.
In the case of ingestion it causes burning in the mouth, nausea, colic, bloody diarrhea, delirium and can lead to death.
Please note that in certain cases, only the manipulation of the flower can cause damage to the skin.
Colchicine is also called “vegetable arsenic”.
The plant in addition to this substance also contains: colchicoside, various fats, gums, resins, tannin, oil and gallic acid.
Please note that for its dangerousness this is a “plant not allowed” by the Ministry of Health in the preparation of food supplements.
The colchico of autumn is used both by popular medicine and by modern medicine for its anticancer, analgesic, antipyretic, anti-gout, emetic and other properties.
In the past it was believed that the juice of the flower bulb, mixed with saltpeter, was useful for treating arthritis and gout. The plant was also used in alchemical practices, as it was believed that it could help reach the ether.
This species, together with other false sapphires, has often been used in experimental studies of agricultural genetics since the processes that precede the division of the cell (“karyokinetic” processes) in these plants are abnormal, often leading to phenomena of polyploidism.

Preparation Mode –
The plant, as mentioned, finds application in various therapies and medical applications. The parts used are the seeds and the tubers with which one can make fluid extracts or dyes.
Due to its toxicity it is recommended not to use it in the traditional way and always and only after consultation and medical prescription.