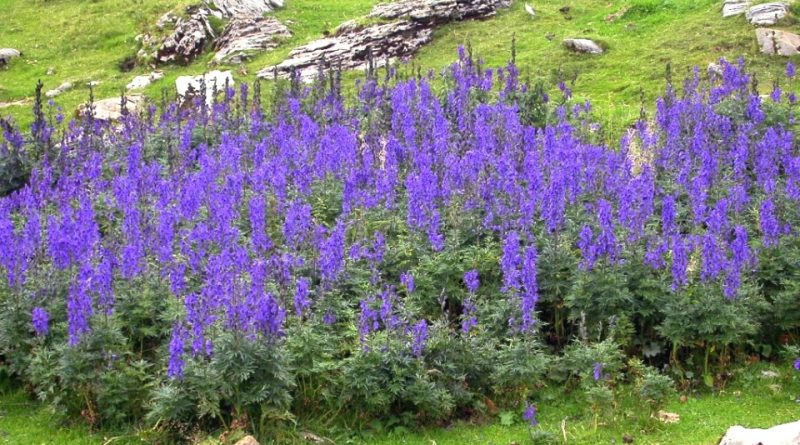 Napello aconite (Aconitum napellus L., 1753) is a herbaceous species of the Ranunculaceae family.

Systematics –
From the systematic point of view it belongs to the Eukaryota Domain, United Plantae, Magnoliophyta Division, Magnoliopsida Class, Subclass Magnoliidae, Order Ranunculales, Family Ranunculaceae and therefore to the Genus Aconitum and to the Species A. napellus.

Etymology –
The term Aconitum comes from the ancient Latin name Virgil et al., From the Greek ἀκόνιτον acóniton, used by Theophrastus and Nicander for the poisonous aconite. The etymology of the Greek name is very controversial: according to Gledhill it derives from the name of a hill in Pontus; for others from Acona, the village of Bithynia where the plant was widespread; another theory makes it derive from ἀκόντιον acóntion dart or javelin, whose tip was poisoned with the extract from the plant and others that seem fanciful and groundless. The specific epithet napellus is the diminutive of napus, the Latin name of the navone, rapa, derived from the Greek νᾶπυ nápu mustard (in Theophrastus), referring to the root similar to a turnip.

Geographical Distribution and Habitat –
The Aconitum napellus is a species of European origin where it is present in the mountainous areas of central Europe: Carpathians, Balkan mountains, Corsica, Pyrenees, Great Britain, Scandinavia, etc. Some varieties have been reported in the Urals and the Caucasus. In Italy it is common in the Alps. Its habitat is that of the half-shaded areas in the alpine pastures and on the banks of the streams besides the mountain woods. Frequent is the presence near the malghe due to the natural fertilization of the cattle (this plant can be considered sinantropa). This species often grows in large groups and prefers clayey and siliceous soils, even if it is found on calcareous soils and with neutral pH, with high nutritional values ​​of the soil that must be moist. The altimetric distribution of the species is normally between 500 up to 2600 m s.l.m .. 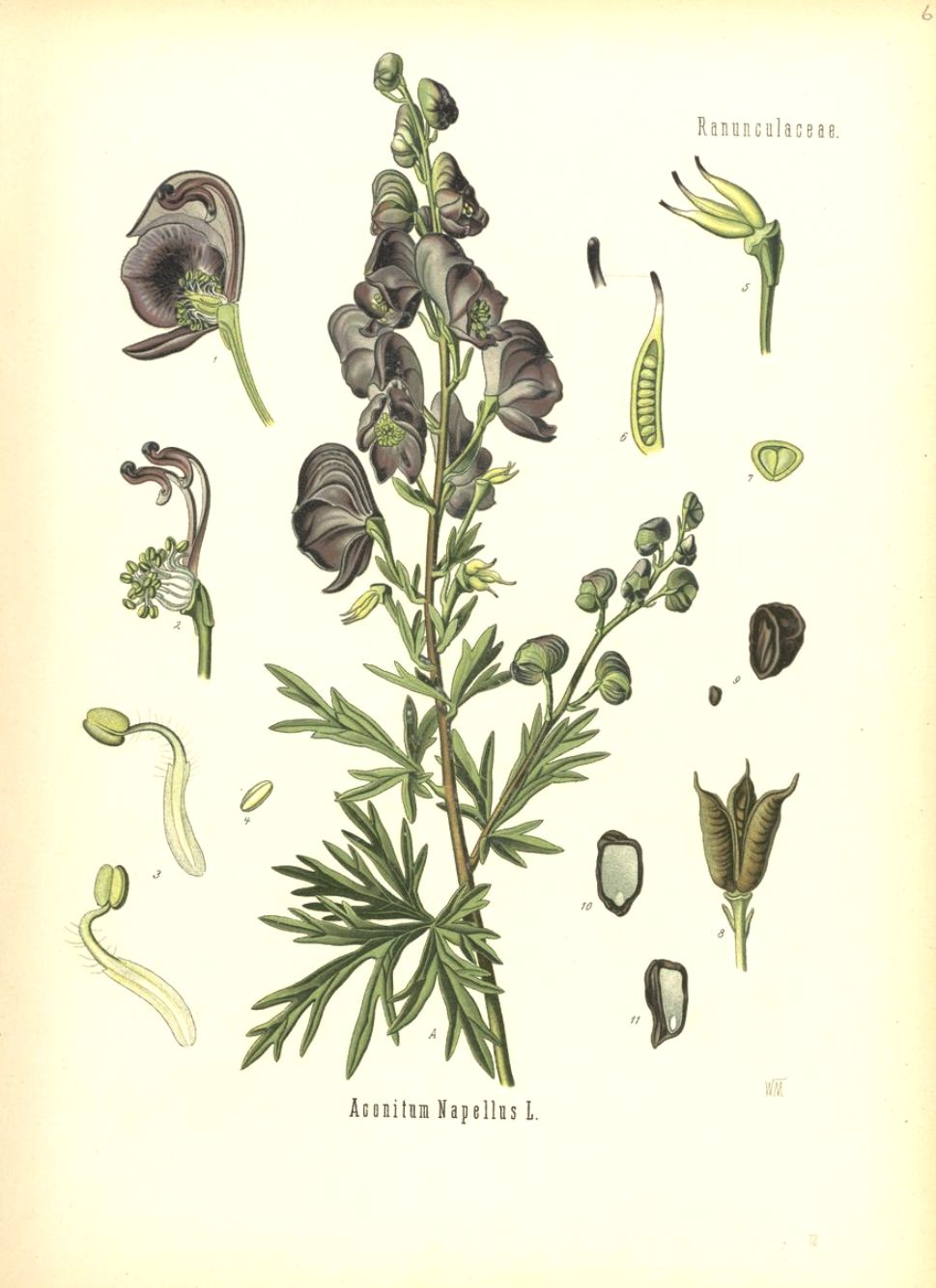 Description –
Aconitum napellus is a herbaceous species characterized by a tuberous, blackish rhizome, sometimes similar to turnip. It has an erect stem, up to 1 meter or more high, which ends in a simple, dense, rarely sparse raceme, which only in later growth plants forms lateral branches. The leaves are shiny, alternate, typed.
The flowers are deep blue, composed of 5 petaloid sepals including the upper one, in the shape of a curved hood with a sickle, which looks like a Phrygian helmet; also the 6 petals are irregular, the 2 upper ones extend downwards in a croissant, the 4 lower ones are reduced to small simple tongues.
The seeds are numerous subtetraedric, of 3-5 mm, flattened, brown-blackish or black and brilliant when ripe, winged in the corners, contained in a follicle (polyphyllicol) composed of (1) 3- 5 follicles, 15-20 mm long , sessile and hairless.
Of this species there is an almost white album variety; a bicolor and a versicolor variety.

Cultivation –
The aconite napello is an easy to grow plant that prefers moist and fresh soils, rich in humus and exposed to partial shade. The species preferably multiplies by division of the rhizomes, in autumn or even at the end of winter-early spring but also by seed: it is sown from April to May to July, in pots or on seedlings, in land of heath mixed with sand, in semi-shaded position. Germination often occurs the following spring. When the plants have developed sufficiently they will be spilled on the seedling or even in the home, better in spring or autumn. The plants do not reach full development the first season and must be left undisturbed for several years. In areas with harsher winters, better some coverage.
For the details of the cultivation technique, see the following sheet.

Uses and Traditions –
The napello aconite is one of the most toxic plants of the Italian flora widespread in the mountainous areas of the Alps.
Accidental ingestion of aconite causes numerous serious ailments: feelings of anxiety, loss of sensitivity, slowed breathing, weakening of the heart, tingling in the face, feeling that the skin on the face shrinks, ringing in the ears, visual disturbances, contraction of the throat that can cause death by asphyxia. Amounts of aconitine even less than 6 mg are sufficient to cause the death of an adult man.
The chemical compounds present in the plant are: aconitina, mesaconitina, nepaline, delfinina, hypaconitina, indaconitina, aconitic acid, malic acid and acetic acid. These are substances, in large part, harmful to humans. Therefore it must be used under the constant supervision of the doctor or pharmacist. Aconitine is one of the major causes of its toxicity among these active ingredients.
The action of aconitine is immediately localized to the marrow, increasing motility at first but determining, in a sudden and often lethal manner, the paralysis of the motor, sensory and secretory nerves.
For this reason this plant was often used, especially by the Gauls and Germans, for military reasons. In fact, they poisoned the arrowheads and spears with it before the fight.
Local irritation phenomena (with the principle of intoxication) have been reported only by holding a bunch of this plant in the hands as the poisonous active ingredients of aconitine can be absorbed through the skin. However, it should be noted that the poisoning of the leaves is less than that of the tubercles.
In phytotherapy it is used for its marked antineuralgic, sedative, analgesic properties. In homeopathy it is indicated against panic attacks, states of shock, sore throat, earache.
The leaves and roots of the Aconitum napellus are used; the latter are the plant’s main drug and are more likely to have aconitine, the active healing ingredient.
Be careful, however, because the young shoots can be confused with mountain radicchio (Cicerbita Alpina) and, moreover, the aconite is a protected species.
Among the other uses of the aconite napello we remember that this plant is often cultivated for its ornamental flowers thanks to the elegant contrast between the flowers and the rich and decorative foliage.

Preparation Mode –
For the use of this plant the time of harvest is: for the leaves during the Summer; for tubers in the Fall.Aconitum napellus is used as a homeopathic remedy useful for violent states, such as fever, tachycardia, hypertension. In this regard, the mother tincture is used. Given the toxicity of the plant, however, any use of the plant in any form and preparation is to be avoided without direct medical consultation.