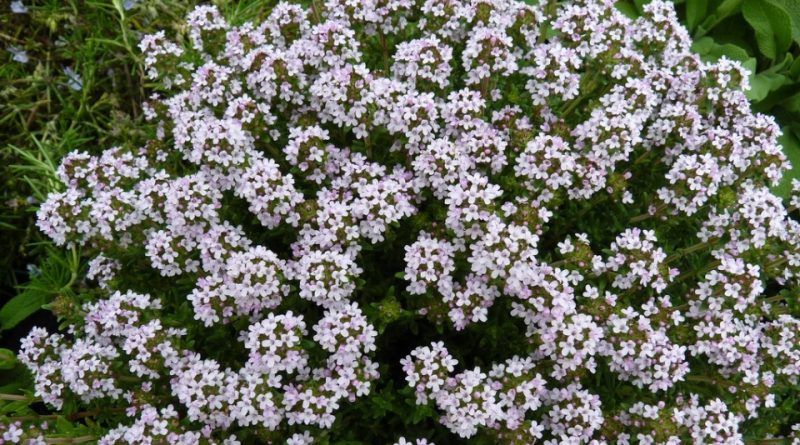 The common thyme (Thymus vulgaris L.) is a perennial aromatic species of the Lamiaceae family.

Etymology –
The term Thymus comes from the Greek θύμον thýmon (to burn) thyme, a name already used by Theophrastus. The specific epithet vulgaris derives from vúlgus volgo: very common, ordinary due to its wide diffusion, banal.

Geographical Distribution and Habitat –
The major thyme is a typically Mediterranean species, with areal limited to the Mediterranean coasts and corresponding to the area of ​​growth of the Olive. It is found in fact in the western Mediterranean basin, from Liguria to Spain and Algeria.
Its habitat is represented by garrigues, arid slopes, from sea level up to 800 meters. It is frequent along the arid hillsides of the coasts while becoming rarer inside. 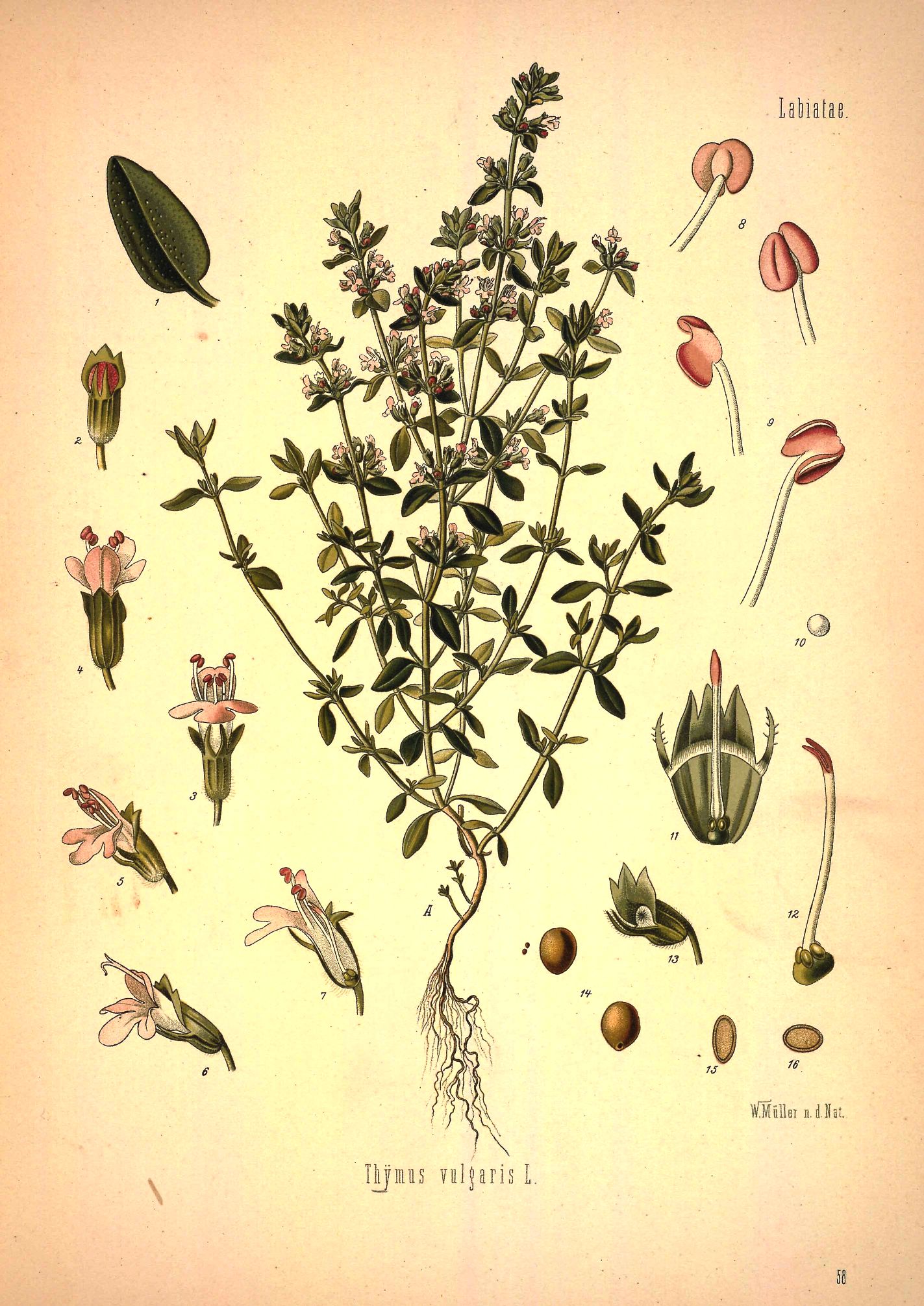 Description –
Thymus vulgaris is a perennial, aromatic, frutic or suffrutical plant, 10 to 60 cm high, with erect quadrangular stems, very branching, which tend to lignify after 4 – 5 years of life, forming dense bushes with a greyish or whitish green appearance; lignified branches with brown bark.
The leaves are first revolute only on the edge, lanceolate 3 mm wide and 7-9 mm long, then revolute to tube and apparently linear, opposite, sessile or briefly petiolate, of gray-green color, lighter on the lower page for the presence of hairs. the flowers are grouped in a subspherical or elongated inflorescence with lanceolate bracts similar to the leaves but smaller; the calyx is 3-4 mm long, with 10-13 nerves and convex tube on the back, velvety with two eyelashes of which the upper trifid with teeth welded on more than half of the height, the inferior bifid with lanceolate-lesiniform teeth , separated by a deep breast; the corolla is pink-whitish in color, 5-6 mm long, with a protruding and straight, bilabiata tube, with a straight upper and marginalized lip, the lower trilobate; 4 protruding and divergent stamens, almost equal, with bilocular, ellipsoidal anthers; bifid stylus, with short, divergent lacinias.
The fruit is a schizocarp composed of 4 dried nuculas (tetrachenium), with ovoid to oblong forms, with a smooth and glabrous surface. The endosperm is scarce or absent.
The anthesis is in the period from March to October.
Pollination is entomogamous and occurs through insects such as Diptera and Hymenoptera, rarely Lepidoptera.
The Thymus genus is one of the most polymorphic of the Lamiaceae family and includes about one hundred species, mostly concentrated in the southern regions of Europe, even reaching as far as Greenland, Kamchakta and many regions of western Asia.
The species of the genus Thymus are in general difficult to distinguish between them and often create hybrids with different characters. Thymus vulgaris L. subsp. vulgaris, the only subspecies of Thymus vulgaris L. present in Italy, is unmistakable due to its revolute leaves and the appearance of a small bush.

Cultivation –
The major thyme is grown starting from sowing which can be carried out on light and sandy soil. When the plants are sufficiently developed they must be transplanted into pots or full earth, in sunny areas without water stagnation. The vegetable varieties are reproduced by cuttings or division of the tufts. As for the collection and storage, it is necessary to remove the leaves and the flowering branches and to dry them in a shady and ventilated place. For the details of the cultivation technique, see the following sheet.

Uses and Traditions –
The use of species of the genus Thymus both for medicinal and culinary uses is lost in the mists of time.
The ancient Egyptians knew the properties of Timo and used it to embalm their dead. The ancient Greeks burned it as aromatic incense, hence the name of the Greek word for burning “thymòn”. The Romans associated it with strength and courage. The soldiers took Timo’s bath before entering the war. This superstition has had a long life and still in the Middle Ages: noblewomen embroidered thyme on the emblems of their knights.
Thyme was much appreciated by the Greeks for its honey derived from the flowers of “herpèllon”, a species of Thyme that grew on the mountains near Athens and at the thyme recognized miraculous properties in “chest diseases”, as stated by Galen, Greek physician and philosopher who, in addition to recommending it to powder to those who suffered from joint disorders, considered him the most powerful antiseptic known. It was considered the best in classical Greece (Monte Imetto honey).
Subsequently even the Romans began to introduce the thyme in the kitchen and to perfume with it wines and cheeses thus handing down to posterity. In the Middle Ages the ladies gave it to the knight of the heart to protect it from battle. Before the invention of the refrigerator, the thyme was used to preserve food due to the high concentration of essential oil with anti-stimrid action.
There are some legends related to this plant. one of these tells that in 1630, in the city of Toulouse, during a plague epidemic, there were four thieves who, immune from any infection, plundered homes and plundered corpses without any problem. Once taken they had to reveal the mysterious potion that made them immune to diseases: “soak Thyme, Lavender and Rosemary in vinegar, rub all the parts of the body well and you will pass through all the epidemics that the devil sends you …”. For this reason, this recipe went down in history with the name of the vinegar of the four thieves.
Its alimentary use is due not only to its aromatic properties but also to the antiseptic ones that facilitate food preservation.
Scientific research has shown that Thyme has such an antiseptic effect that it can kill bacilli in 40 seconds.
Thyme contains an essential oil (in different percentages depending on the species) whose main constituent is thymol. There are also: flavonic glycosides and flavones, tannins, triterpenes, saponins with antibiotic properties.
At Timo are recognized antiseptic, antispasmodic, aperitif, bechiche, carminative, antibiotic, antifungal, deodorant, diuretic, vermifuge, intestinal anti-bladder, balsamic properties. Furthermore, the thyme is considered an exciting and invigorating substance, recommended in case of respiratory problems, poor digestion, colitis, cystitis. An infusion gives relief to headaches, nervousness, cough, flu and helps against acne from the inside.
Thyme is used both in the cosmetic field as a hair strengthening and also in veterinary preparations for internal or external use.
In addition, the thyme is a good melliferous plant, much visited by bees that make it an excellent honey, but not very common as the areas with the presence of thyme, in recent times, have decreased due to intensive agriculture and habitat erosion typical of this plant.

Preparation Mode –
The thyme, in addition to flavoring the meat, is used to flavor broths, fillings, soups. It goes well with fish and vegetables (peppers and potatoes) but also with beef and lamb, chicken and game dishes that require slow cooking with garlic and wine. It is often added to aromatic butters.
Thyme is also widely used to flavor aromatic oils and vinegars. It is also used to prepare liqueurs and aromatic wines.
For this purpose we gather the flowers and leaves that are used, precisely, to flavor soups and meats.