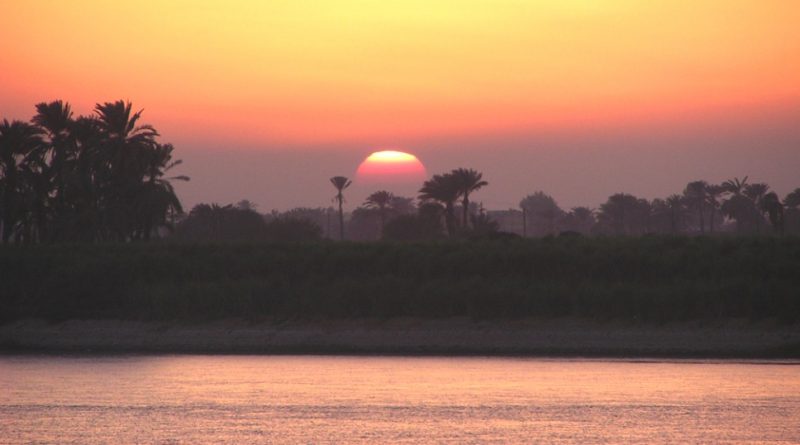 The Egyptians and agriculture

It can be said that agriculture and Egypt represent one of the most important pairs on the origins of the entire Western civilization. Agriculture was present in Ancient Egypt since the Neolithic period.
It was in this period that the agriculture of ancient Egypt transformed from itinerant to stable, contributing to the creation of the first settled settlements of peasants, villages and cities concentrated above all in the Nile basin.
This river, which originates from the equatorial lakes of Africa and flows north to flow into the Mediterranean Sea, allowed agriculture in the whole area of ​​the territory that accompanies its course and which still today is called “useful Egypt”. Egypt it was defined by the Greek historian Herodotus, already in the V sec. B.C. “Gift of the Nile”, precisely because of the close dependence on the river waters, while his was also the “delta” name given to the triangular mouth, similar to the fourth letter of the Greek alphabet.
The importance that the river had for the life of the whole Egypt was testified by the space that it occupied in the traditions and in the complex of the religious rites of the ancient civilization of the pharaohs: the Nile was called “the river” par excellence and was venerated as divinity (Hapi), it is also believed that the myth of the revival of Osiris reflected the seasonal cycle of floods, the source of life for the country.
But the Nile was not only a water source, it was also a waterway that crossed a large tract of North-Eastern Africa, connected the Mediterranean with present-day Sudan and Ethiopia, for which it was also used as a communication and trade artery.
The peculiarity of the Nile, unlike other large rivers such as the Tigris and Euphrates, was that of being characterized by extremely regular floods that began in the period of June and led the river to overflow and gradually flood part of its basin, reaching the highest level towards September; from then until November the waters receded, bringing the level of the river back to the level preceding the flood with absolute punctuality.
With this cycle of flooding and withdrawal of water, the Nile left a mud rich in fertilizing substances (called silt) on the flooded soils that prepared the earth to be sown and allowed an abundant harvest in the following months, until the new flood that started again with regularity.
But man joined nature in his creativity. In fact, a series of canals, made by man, brought the waters to even the most distant areas of the Nile. So to irrigate the fields higher up than the Nile the Egyptians used an instrument called shaduf. It consisted of two posts driven into the ground on which a third horizontal pole was placed compared to the previous ones. On this last pole there was a pole that had a stone at one end and, at the other end, the bucket that had to be filled with water. This system allowed the buckets to be lifted without too much effort.
Along with these techniques, the perpetuation of the Nile regime allowed the ancient Egyptians to make the most of the fertility of the river’s alluvial basin, without ever resorting (except in special cases) to the channeling work that was necessary in Mesopotamia.
This allowed a particularly flourishing agriculture in Egypt.
But to whom did the cultivated land belong? The cultivated land, in theory, like all the land in the country belonged to the pharaoh. They were, however, assigned to the ministers and the rulers of the various districts, who soon established it as a personal property. The boundaries of the fields were marked with steles on which were indicated the name of the owner, the date of the transfer of ownership and a short description. These stelae were considered sacred and those who tampered with them were subjected to severe punishment.
The land was then cultivated by farmers. They were linked to the land from father to son. Their lord could dispose of them as he wished, also by testament, together with the land and cattle. Peasants, in addition to cultivating fields and keeping livestock, also had to carry out other work such as digging canals, transporting stones, and making tools.
The typical products were above all cereals (barley, wheat, rye …), legumes, fruit trees (especially figs and dates), vines, vegetables and some plants with multiple uses, such as flax and papyrus.

The agriculture of ancient Egypt soon became very flourishing and rich: the Egyptian grain was of very high quality and was exploited to produce bread, present in the country’s diet since the Neolithic, furthermore from the fermentation of wheat and barley it was obtained beer, a popular drink in Egypt and usually consumed alongside wine.
Cereal cultivation was also flanked by cattle breeding, particularly common in the Nile basin and exploited above all as draft animals in plowing operations, whose importance was also reflected in religious rituals: the Egyptians venerated the black bull Apis as sacred, connected to the cult of the god Ptah who was considered the mythical creator of the city of Menfi and whose name was connected to the etymology of the name “Egypt” (it derives from the Greek distortion of the expression “house of the spirit of Ptah”).
However, agricultural activity in Ancient Egypt was not concentrated only in the narrow fertile belt of the Nile; already existed for millennia of the green areas in the middle of the desert known as oases, areas in which there was a source of fresh water that allowed human life and allowed the exploitation of the land for crops of various species. These oases still present today were also hubs and refreshment points for the long distances of the time.
In Ancient Egypt these areas were inhabited by semi-nomadic desert populations who practiced agriculture and pastoralism, remaining substantially isolated from the rest of the country and not recognizing de facto the authority of the pharaohs, an aspect that remained for a long time even after the conquest of Egypt by the Persians and the Romans. In any case, it was the development of agriculture, connected to the Nile river that caused a demographic increase with the birth of the first cities around 3000 BC, which arose mainly along the river course and became major political centers: agriculture was the main resource of Egypt, which imported timber from Lebanon, copper from Cyprus and ceramics from the island of Crete, while Nubia was militarily dominated and exploited for its mineral deposits, as well as being used as a reservoir for slaves (which, however, were never numerous in the Egyptian civilization).
Egypt at that time exported large quantities of wheat to exchange it with the scarce raw materials (mainly timber and metals, being a region almost entirely desert). For this reason and because of its opulence, it was also a land of conquest by foreign military powers, suffering more attempts at invasion: in the XVII century. B.C. the Semitic population of the Hyksos settled in the Delta region and was chased away by Pharaoh Ahmosi, while the Hittites attempted to conquer the country and were repulsed at the battle of Kadesh in 1280 BC about.
The historical events, however, followed one another with the weakening of the central power and, subsequently, Egypt fell under the dominion of Assyrians, Persians, Macedonians, to finally finally subdued by the Romans in 30 BC, becoming one of the most important provinces of the Empire is the real “granary of Rome”, a role that it did not cease to cover in the early Middle Ages (until the Arab conquest of the seventh century AD, following which Egypt was Islamized).
A special mention should be made of the craft occupations connected to the main textile and fiber crops. In fact, among the plants cultivated in the lands along the Nile, flax and papyrus were very important, destined to be associated for a long time with the Egyptian civilization until they became symbols. The use of linen was also associated with the production of a flourishing handicraft in the its processing. In fact the inhabitants of Ancient Egypt often wore long tunics made with this fabric and the Romans called them linigers, “people who wear linen” (the appellation was often used to indicate the priests of Isis who wore similar clothes).
Equally versatile is the papyrus, a lake plant that grew spontaneously in the muddy areas of the Delta and along the course of the Nile, of which the Egyptians fed and from which they derived fuel, material to produce sandals and small boats: obviously the main use of the papyrus was as a desk material, exploiting a technology that was developed in Egypt and later spread throughout the ancient world, especially to Greece and Rome. The Egyptians cut the stem of the plant into thin layers, which were superimposed on each other and pressed, exploiting the natural juice that escaped and glued the various elements together. The result was a thin sheet on which it was possible to write and the craftsmen used to combine several sheets to form a roll of several meters, called by the Greeks biblos and by the Romans volumen (hence the Italian “volume”, a term still used today for indicate a book). Papyrus was the most versatile and easy to use desk material in the ancient world before the introduction of paper, also because it was relatively less expensive than parchment, or animal skin treated with tanning operations; it was used in the Egyptian world both for decorative purposes and as a document and the study of these findings originated in the modern era a branch of philology called papyrology, also active in the reconstruction of the Greek-Latin civilization.