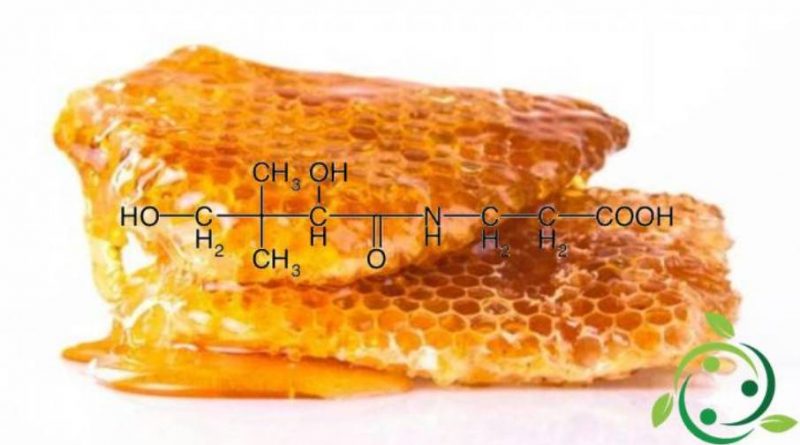 Pantothenic acid, whose brute or molecular formula is: C9H17NO5, also known as panthenol (or vitamin B5), is a compound deriving from the condensation, via carboamidic bond, of a β-alanine molecule with a pantoic acid molecule. Being a chiral molecule it exists in the forms dextrorotatory and levogyra but the biologically active form is the dextrorotatory one.
From a chemical-physical point of view, pantothenic acid is unstable to heat, bases and acids and is soluble in water. Together with ATP and β-mercaptoethylamine, pantothenic acid forms Coenzyme A and fosfopanteteina.
The determination of the chemical formula of pantothenic acid and its synthesis took place in 1940; in 1946 the biochemical mechanism of this compound was understood.
Pantothenic acid, being an important constituent of Coenzyme A, is a fundamental component of human metabolism; in fact Coenzyme A (CoA) functions as a transporter of acyl and acetyl groups and, as such, enters the metabolic pathways of carbohydrates, amino acids, fatty acids, steroid compounds and ketone bodies.
Let’s see in detail in which syntheses the pantothenic acid intervenes: – in the synthesis of citric acid by condensation of CoA with oxalacetic acid;
– in the synthesis of acetylcholine by choline acetylation – in the synthesis of cholesterol;
– in the synthesis of ketone bodies;
– in the synthesis of steroid compounds;
– in the oxidation of fatty acids;
– in decarboxylation reactions of keto acids, with formation of succinyl-CoA that enters the Krebs cycle and in the protoporphyrin synthesis pathway.

It also participates in other acetylation reactions. Pantothenic acid is naturally contained in many species of both the animal and vegetable kingdoms.
It is found, in particular, in the liver, in chicken and beef livers, in brewer’s yeast, wheat bran, sesame seeds, royal jelly. To a lesser extent it is found in sunflower seeds, soybeans, eggs, dried peas, raw molasses, whole wheat buckwheat flour and in legumes, especially as CoA and phosphopanthetine (85%).
Being in so many foods it is difficult that there is a deficiency of vitamin B5, caused by a wrong diet, it is much more probable that a deficiency of this type manifests itself starting from a pathology in which other group B vitamins are usually lacking , for this reason integrators usually include the whole group.
In any case, the lack of pantothenic acid is very rare as it occurs in many forms in many foods. Consequently it is necessary to be substantially faced with a case of severe and general malnutrition, but clinical cases in the case of an excess of quantity have not shown toxicity. The metabolism of pantothenic acid is not yet completely clear today, in fact an integrative administration of the same showed in subjects an increase in the amount of urine and at the same time an increase in vitamin B5 during the moments of fasting and in cases of diabetes (without the administration of insulin). Pantothenic acid in this sense is therefore sensitive to insulin. However the daily requirement of pantothenic acid, vitamin B5 or panthenol is between 3 and 12 mg. Below or above this range one is either in shortage or toxicity.
Some theories indicate the integration of vitamin B5 as an effective solution to prevent hair graying and to treat nervous system disorders in association with diabetes or mental illness. However, in this regard there is no homogeneous response from the scientific community. It is also true that the B group vitamins are very useful and more necessary in particular situations, such as following surgical operations, in the case of wounds, serious illnesses and in the case of mental stress.
In general, therefore, the lack of pantothenic acid can determine skin alterations such as: redness, fissures, seborrheic dermatitis.
The daily contribution, at the moment, does not seem well defined. However, the daily dose is 5-10 mg.
Furthermore, acute or chronic toxic effects from high doses of pantothenic acid are not known.