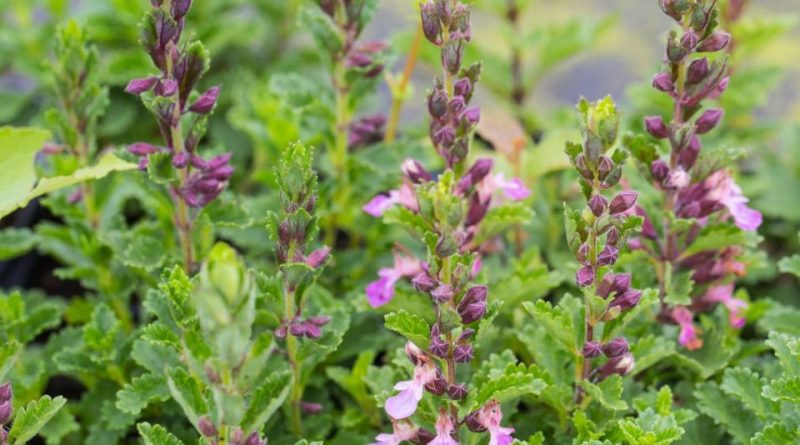 The common camedrio (Teucrium chamaedrys L., 1753) is a shrub species belonging to the Lamiaceae family.

Etymology –
The term Teucrium is the name given by Linnaeus taking it from the Greek τεύκριον teúcrion, a plant cited by Dioscorides and Pliny the Elder (book XXV, chap. 5), possible reference to Teucer (Τεῦκρος Teucros), first king of Troas lived before the war di Troia which, according to legend, would have used plants of this kind for medicinal purposes. The specific epithet chamaedrys comes from the Greek prefix χᾰμαι- chamai- a terra, creeping and from δρῦς drys oak: similar to a small oak; it seems that this name has already been used by Theophrastus for a dwarf plant with leaves similar to those of oak.

Geographical Distribution and Habitat –
The common camedrio is a plant that prefers dry sunny places, in the screes, on the rocks. It is a sub-Mediterranean species present in all regions of Italy. It grows in very open woods, in dry meadows and in the moors, on loose clay soils rich in skeleton, subarides, from basic to subacid, with a distribution from the basal plane up to 1700 m. sl.m .. 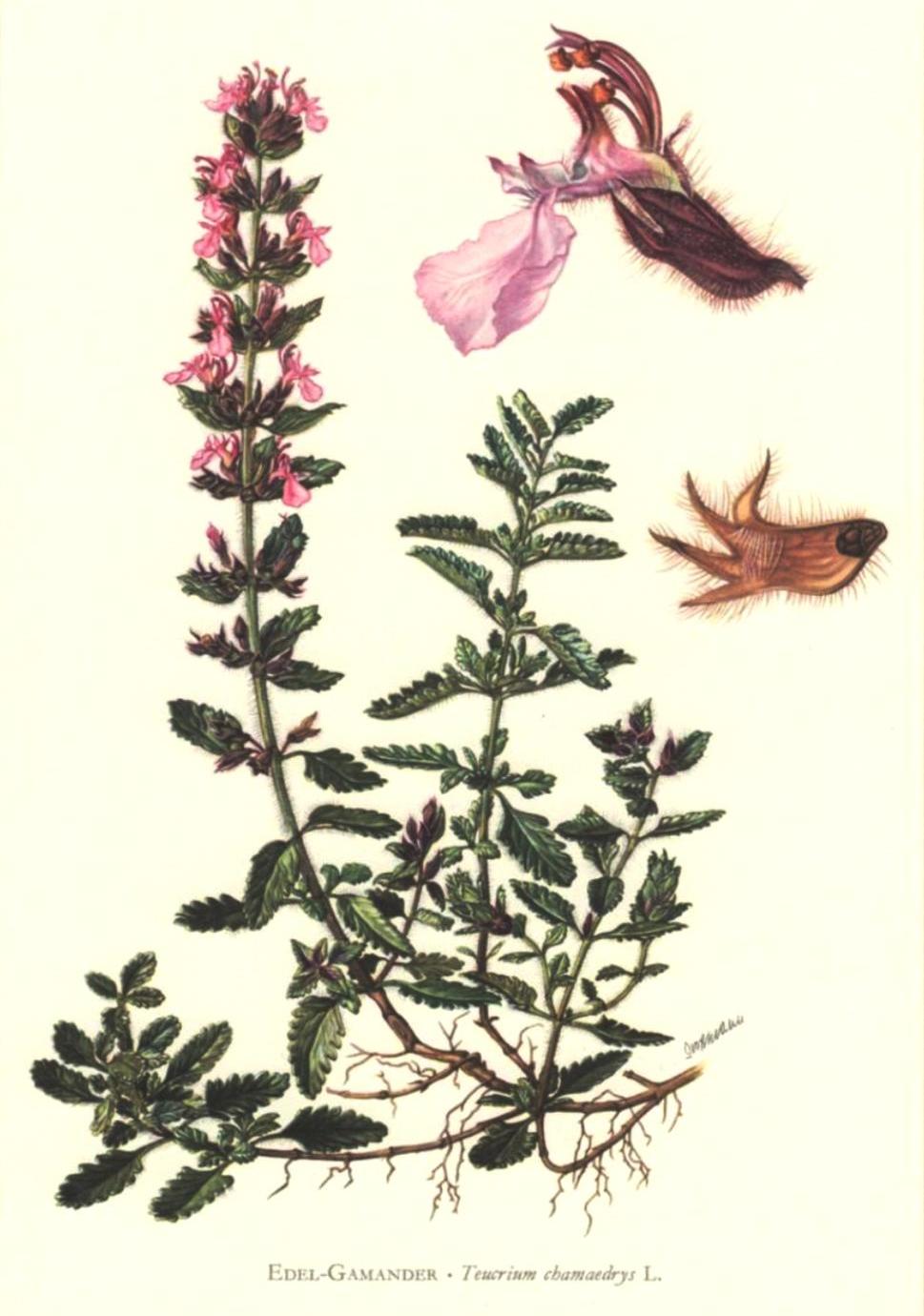 Description –
Teucrium chamaedrys is a perennial shrub species with the basal portion of the stems lignified and the aerial herbaceous portion, which can reach 40 cm in height, with numerous simple stems; it is more or less hairy, with an abundance of hair in plants grown especially in arid places and in high mountains.
The leaves are inserted two by two on the short stem, with a not very long petiole, of oval shape with the variously crenate margin which at the base gradually narrow to wedge; they have a shiny upper surface.
The flowers are placed in groups of two to six at the armpit of the upper leaves, which are transformed into bracts of similar shape to the true leaves but smaller and less crenate. The individual flowers have a tubular calyx terminated by five equal triangular teeth; the corolla has a pinkish-purple color, tubular and split at the mouth in a lower median lobe, large and obovate in shape with the sometimes crenated and wavy edge, and in four small linear lobes. The anthesis is between May and July.
The schizocarpic fruit is a microbasario (tetranucula or tetrachenium) with 4 mericarpi (nucule or achenes) subglobosis of 1.5 (1.75) x 1.2 (1.5) mm, with reticulated or smooth, papillose, colored surface dark brown, enclosed in a persistent glass.

Cultivation –
The common Camedrio can also be cultivated for ornamental purposes to decorate sunny areas of green areas and gardens. Especially recommended for rock gardens (cliffs, stony slopes or borders) and in areas of difficult cultivation of other species.
The plant spreads quite easily both by seed and by division of the tufts, in the spring period.
For the details of the cultivation technique and for the tricks to its use in the green spaces, see the following sheet.

Uses and Traditions –
The common Camedrio, also known by the names of: Querciola, Calamandrea, Erba viva, Calandrina and Camedrio querciola is a plant that is weakly toxic in all its parts, although it is sometimes used for its bittering, aperitif and digestive properties.
In this plant are present: teucrioresina, scutellarina, choline, tannin. The plant also provides an essence with a good yield (0.6%) of yellow color and a particular and characteristic odor that contains various substances: pinene, camphene, borneol, caryophyllene.
For these substances the Teucrium chamaedrys has some healing properties: in the past this plant was used for its laxative properties (it blandly regulates intestinal functions), or carminative, or even digestive and stomachic. Externally, for example, it was used as an astringent in pyorrhea and in gingivitis (inflamed oral mucosa). All benefits, however, never definitively proven while it is a hepatotoxic plant, and its use in any form is prohibited by the Ministry of Health itself with its own decree published in the Official Gazette 181-1996, as responsible for acute hepatitis, fulminant and chronic hepatitis.
To obtain the flavoring, bittering, aperitif and digestive properties, the flowers used are the flowering tops.

Preparation Mode –
The common Camedrio is a melliferous plant, so it could usefully be used to produce honey, although today this production is limited to the restricted areas where the plant is widespread. In the past, this plant was widely used for the preparation of stomachic liqueurs with a bitter base or in the vermouth industry and beverages in general. This use has been abandoned for a recognized and proven toxicity of some of its components (neoclerodanic diterpenes) that can cause various types of hepatitis (hepatic parenchyma disorders).