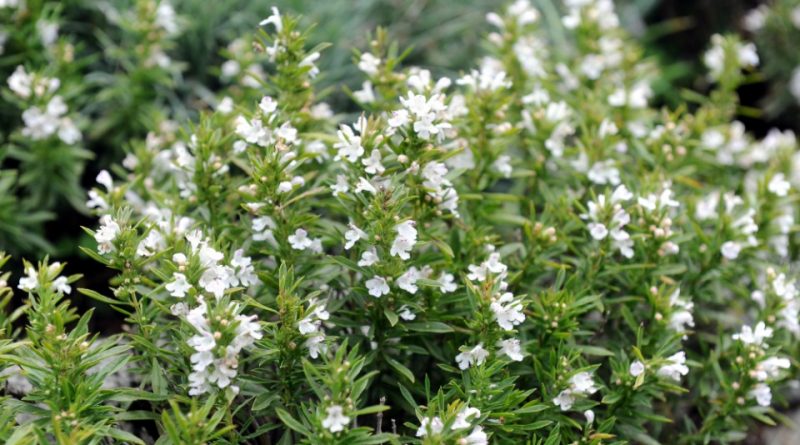 Etymology –
The term Satureja is of uncertain etymology: perhaps from séro seminare or satum seminato, or from the greek σᾱτῠρος sáturos satiro or from the Arabic s’átar, name of many plants, and finally from saturejum, probably derived from saturated salsa, mixture of many different ingredients. The specific mountain epithet comes from mons montis, mountain: of the mountains, mountain, in reference to the growth horizon (1000-1400 m).

Geographical Distribution and Habitat –
Savory mountain is a perennial semi-evergreen species, native to the mountainous regions of central-southern and western Europe. Its habitat is that of calcareous, rocky, arid lands, at the edge of mountain roads, up to 1300 m of altitude. 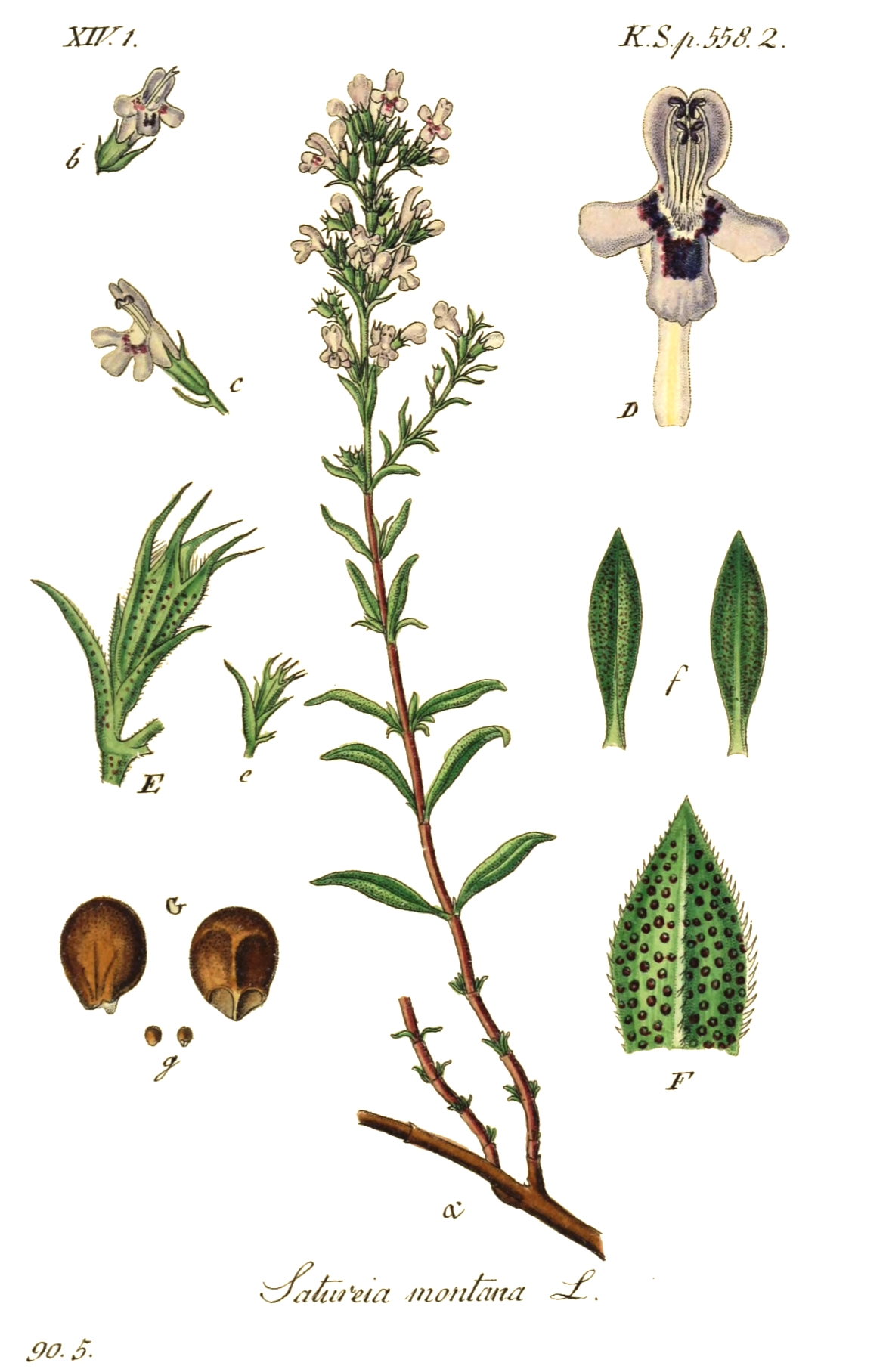 Description –
Satureja montana is a suffruticosa herbaceous species with a strong aromatic odor, which grows up to 30-40 (50) cm. The stems are woody at the base, more or less tetragonal, erect, pubescent for short back hairs, usually widely branched from the bottom, so as to form a small bush.
The leaves are bright green, opposite, subsessile, very spaced on the stem, with entire, linear-lanceolate, sharp apex often folded downward, coriaceous, edged with small cilia, with scattered glands and with central nerve evident in the face inferior, and with a bundle of 2-8 leaflets in the axilla.The flowers are hermaphroditic, perfumed, they are arranged in verticillastri of 2-3 to the axilla of the upper leaves supported by peduncles of 3-4 mm, have bracts and similar bracts but smaller than the leaves; the tubular calyx with 10 nerves, which ends with 5 triangular and pointed teeth more or less equal; the hairy-glandular corolla, white or pinkish white, is divided at the apex of the tube that protrudes from the calyx, in two lips, the upper one whole and erect while the lower trilobate, perpendicular to the tube and with the median lobe, oblong wider than side; 4 stamens, bifid stylus.
The fruit is housed inside the calyx and is a schizocarp: microbasario (tetrachenium) formed by 4 oval achenes dotted with small grains. The anthesis is in the period between July and September.

Cultivation –
The savory mountain can be propagated by seed or by cutting tip (take the twigs without flowers). When the seedlings are well developed they can be transplanted into pots or into full earth. Regarding the collection and storage, cut the flowering branches at the beginning of flowering and use them fresh or dried in a shady and ventilated place. For the details of the cultivation technique, see the following sheet.

Uses and Traditions –
The savory mountain was known by the ancient Romans with the name of Satureia = Grass of satyrs for its hairiness that recalled that of the satyrs, but also for its considered remarkable aphrodisiac properties, so that the ancients recommended moderation in its consumption, not to unleash a immoderate and uncontrollable sexuality (satirism).
Its active ingredients are: tannins, labial acid, vitamin A, calcium, potassium, essential oil containing borneol, camphor, carvacrol, cymene, estragole, terpinene and thymol, giving it antiseptic, antispasmodic, carminative, tonic, stimulant, expectorant properties stomachic, antidiarrheal, digestive.
This plant finds great use as a herbalist use: the flowering tops are used in infusion, to combat diarrhea, difficult digestion, gastrointestinal disorders, to thin the phlegm in colds and bronchitis, to wash wounds and sores, and as a mouthwash for the throat and cavity oral inflammation.
In cosmetic use it can be added to bath water; removes tiredness, tones, purifies and deodorizes the body, used in the foot bath, it removes the swelling of the ankles. Its infusion rubbed into the hair, strengthens the hair bulb and keeps lice away. Savory for its pleasant aroma, it is also used in liqueur and perfumery.
According to popular medicine the Satureja montana has the following medicinal properties:
– antiseptic (property of preventing or slowing the development of microbes);
– carminative (favors the escape of intestinal gases);
– digestive, helps the digestion of foods;
– expectorant (promotes the expulsion of bronchial secretions).
Mountain savory is also bottoried by bees; therefore it is a melliferous plant from which a good honey is obtained, which however is very rare, since the plant has a limited diffusion.
In addition to the nominal subspecies described above, it is present in Italy: Satureja montana subsp. variegata (Host) P.W. Ball with smaller calyx (2.5-4mm) and bell-shaped with upper teeth bent upwards, and flowers in verticylus lassi, with peduncles and pedicels at least in part longer than 5 mm.

Preparation Mode –
Mountain savory can be used in the kitchen for food purposes. The edible parts are the leaves with which an infusion can be made, since it is a medicinal herb and medicinal herb; furthermore they can be used as a condiment in many recipes. The leaves, strongly aromatic, are used to give flavor to meat and fish dishes; in fact it blends well with grilled meats, cereals, legumes, sausages and sauces.