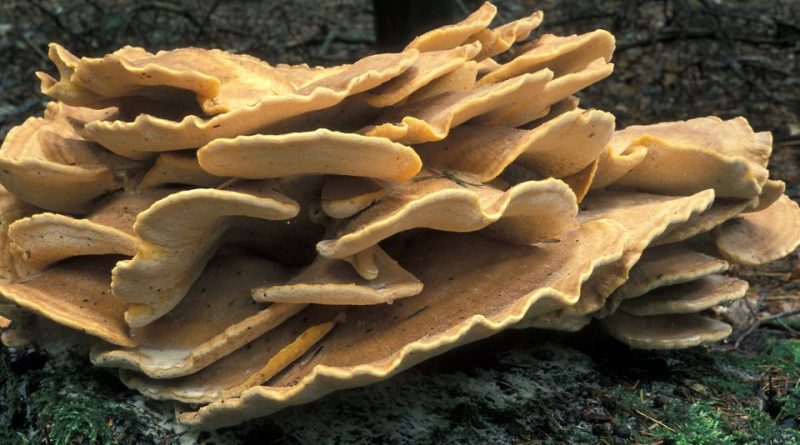 Etymology –
The term Meripilus comes from the Greek μερίς merís part, repetition of parts and from πῖλος pílos hat, cap: for the appearance of the carpophore. The specific epithet giganteus comes from the Greek γιγάνειος gigantteios gigantic: due to its size, even in a relative sense, compared to other similar species.

Geographical Distribution and Habitat –
Meripilus giganteus is a fungus, not very common, saprophytic that grows at the base of broad-leaved trees, especially beech, stumps or roots. Fruits in the period between summer and autumn.

Recognition –
It is recognized by a carpophore with numerous fan-shaped hats, arranged around a common base, 10–20 cm wide and 1–2 cm thick, wavy, brown; the upper face is furrowed radially and concentrically with light brown and dark brown areas, while the lower face is whitish, bearing the hymenial apparatus (tubules and pores). The tubules are whitish decorrenti, not separable from the carpoforo, turning to the blackish to the touch; the pores are small, subcircular or polygonal, whitish, also blackish to the touch. The flesh is quite tender and fibrous when young, coriaceous when ripe, white, blackish to the touch or in old age, with a very strong, or faintly yeast, characteristic and sweet and slightly acidic taste.
Under the microscope, hyaline spores, smooth, non-amyloid, subglobose, 5.5-6.5×5-6 microns are noted, characterized by a large central vacuole. Clavicular basidia, tetrasporic. Absence of buckle joints.

Cultivation –
Meripilus giganteus is not a cultivated mushroom also due to its poor edibility.

Uses and Traditions –
It is a fungus that can reach considerable dimensions and weight. According to some good when it is young and inedible at maturity due to the leathery and woody consistency; however, since it is already leathery in the young specimens, it can still be considered of little value or without gastronomic value.
It can be confused with other similar mushrooms; among these we recall:
– Laetiporus sulphureus (Bull .: Fr.) Murrill partly resembles it, especially when it reaches an advanced stage of development so that the colors (usually bright yellow-orange, very bright) tend to fade;
– Grifola frondosa (Dicks .: Fr.) S.F. Gray is formed by numerous fruiting bodies that branch off from a common whitish base, in turn further branched in an ever more dense way, ending up in small spatula-shaped, brown-greyish hats; it is also saprotrophic or parasitic. In Japan, Grifola frondosa is called maitake which means “dancing mushroom” and is attributed with special therapeutic properties which, on the other hand, have not been verified by traditional medicine;
– Polyporus umbellatus (Pers .: Fr.) Fr. is very similar to leafy Grifola, but with more faded pile colors and single funnel-shaped rather than spatula-shaped hats, sometimes it forms a sort of sclerotia (a globular mass) in the ground from which one departs;
– Bondarzewia mesenterica (Schaeff.) Kreisel is composed of much fleshier overlapping layers, also grouped in a common base, ocher or light brown, with typical growth in mountain areas, on stumps or outcropping roots of Silver fir, more rarely of Spruce; has immutable flesh with a bitter or very spicy, burning taste;
– Polyporus squamosus (Huds .: Fr.) Fr. could finally vaguely resemble him, but is characterized by the much more ocher colors, the hat with much larger scales, the growth in single, or in any case few, specimens.

Preparation Mode –
Due to its low edibility and the difficulty of finding it in conditions where the meat is still tender, it should be considered an inedible mushroom.