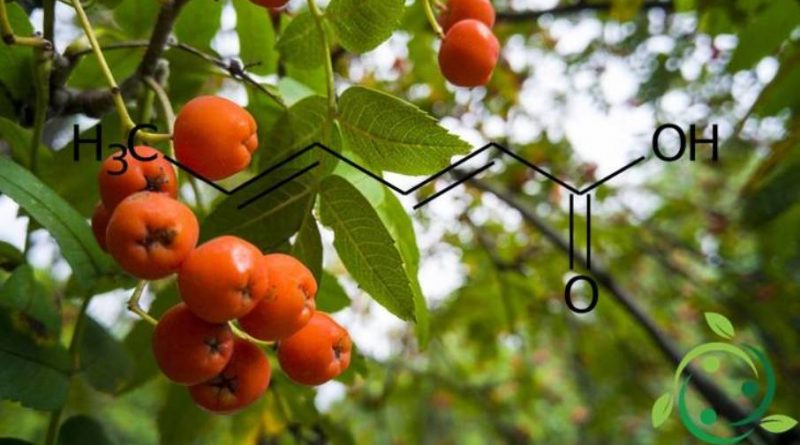 Sorbic acid is a polyunsaturated fatty acid consisting of 6 carbon atoms, whose term in the IUPAC nomenclature is: hexa-2E, 4E-dienoic acid and whose brute or molecular formula is C6H8O2.
It is a substance that is solid at room temperature, white in color and has a faint odor, and is also an irritating compound.
Sorbic acid is found in nature, in apples, in plums, but above all in the berries of the rowan tree (Sorbus aucuparia L), in those of the house rowan (Sorbus domestica L.) and in Schizandra (Schisandra chinensis (Turcz.) Baill .).
Sorbic acid is also metabolised by animals and some micro-organisms, acting as a source of calories like other fatty acids. The caloric intake is equal to 6.6 Kcal / g.
It is obtained by synthesis with different processes and reactions, including the condensation of crotonaldehyde and ketene.
Sorbic acid is used for many uses including that as antimicrobial and antifungal in food, cosmetics and drugs and is also used in polymerization processes for the production of resins, rubbers and plastics.
The antimycotic action of ascorbic acid has been confirmed by some researches and in particular against: Alternaria, Ascochyta, Ascosphaera, Aspergillus, Botrytis, Cephalosporium, Chaetomium, Cladosporium, Colletotrichum, Cunninghamella, Curvularia, Fusarium, Geotrichum, Gliocladium, Helminthosporium , Heterosporium, Humicola, Monilia, Mucor, Penicillium, Phoma, Pepularia, Pestalotiopsis, Pullularia, Rhizoctonia, Rhizopus, Rosellinia, Sporotrichum, Trichoderma, Truncatella, Ulocladium.
This antifungal action makes sorbic acid useful in reducing mycotoxin risk even if at non-inhibitory concentrations (10mg / ml) not only does it not reduce the production of aflatoxins but can stimulate the formation of mycotoxins under certain conditions.

Another very interesting action of sorbic acid is against some strains of bacteria, especially against: Acetobacter, Achromobacter, Acinetobacter, Enterobacter, Aeromonas, Alcaligenes, Alteromonas, Arthrobacter, Bacillus, Campylobacter, Clostridium, Escherichia, Klebsiella, Lactobacillus, Micrococcus, Moraxella, Mycobacterium, Pediococcus, Proteus, Pseudomonas, Salmonella, Serratia, Staphylococcus, Vibrio, Yersinia.
For this reason, its antifungal properties are especially interesting, making it commonly used in food products such as cheeses (to control the growth of mold and yeasts on the crust), yogurt, lemonades, lemon juice, fruit juices, sauces, tomato puree, ketchup, salad dressings, rye bread, alcoholic and non-alcoholic flavored drinks, gnocchi, polenta, cakes, bakery products, wine and cider. Sorbic acid, in fact, is much more effective in slightly acidic foods than in neutral ones.
In fact the inhibitory action of sorbic acid is in any case linked to the pH and to the characteristics of the medium in which it is found as the inhibitory efficiency is greater in its undissociated form.
In the European Union it can be used as a food additive with the E 200 code in different foods at different permitted concentrations. It can also be used under other chemical compositions such as: potassium sorbate (E 202), calcium sorbate (E 203). Unlike the first two, sodium sorbate (E201) is not an authorized additive in the EU due to its proven genotoxicity.
In the body, sorbic acid is metabolized to carbon dioxide (CO2) and water (H2O) with the same mechanism as the fatty acids normally found in food. As a rule, therefore, there are no side effects to the concentrations used; only in a small percentage of individuals does sorbic acid cause allergic reactions, while its contact with the skin produces a hives supported by non-immunological mechanisms, due to a non-specific mastocytic degranulation with histamine release (the same induced by the bites of nettle).