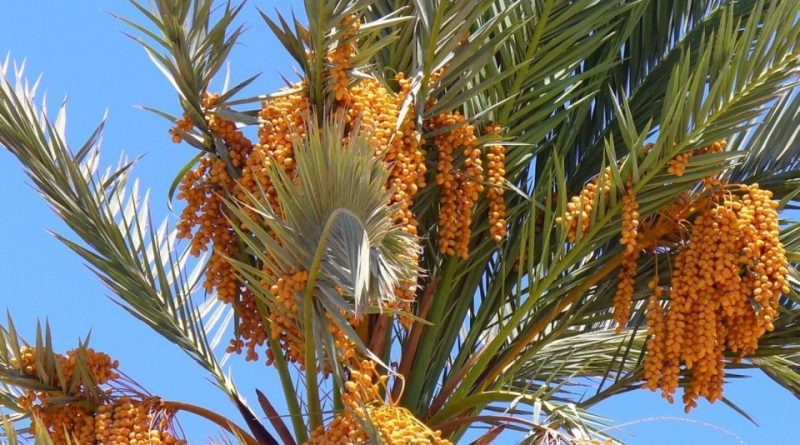 The date palm (Phoenix dactylifera L., 1753) is an arboreal species belonging to the Arecaceae family.

Etymology –
The term Phoenix is ​​an ancient name already mentioned by Theophrastus, with which the Greeks called the plants of this genus and derives from the Greek φοῖνιξ phoínix = Phoenician because it was precisely the Phoenicians who spread these plants.
The specific epithet dactylifera comes from the Greek δάκτυλοϛ dáctylos finger, date and from φέρω phéro bring: which produces dates.

Geographical Distribution and Habitat –
The date palm is a species native to North Africa, although, due to the antiquity of the crops, its original range cannot be determined with certainty, just think that it was already cultivated in 4000 BC to Babylon.
Today it is widely cultivated in northern Africa and southwest Asia, as well as in Arabia and up to the Persian Gulf, where it forms the characteristic vegetation of the oases. It is also cultivated in the Canaries, in the northern Mediterranean and in the southern part of the United States. Also present in Italy where it is also used as an ornamental, especially in Sicily where it is widespread especially in the gardens of the city of Palermo; nevertheless it is not exploited or cultivated for commercial purposes. 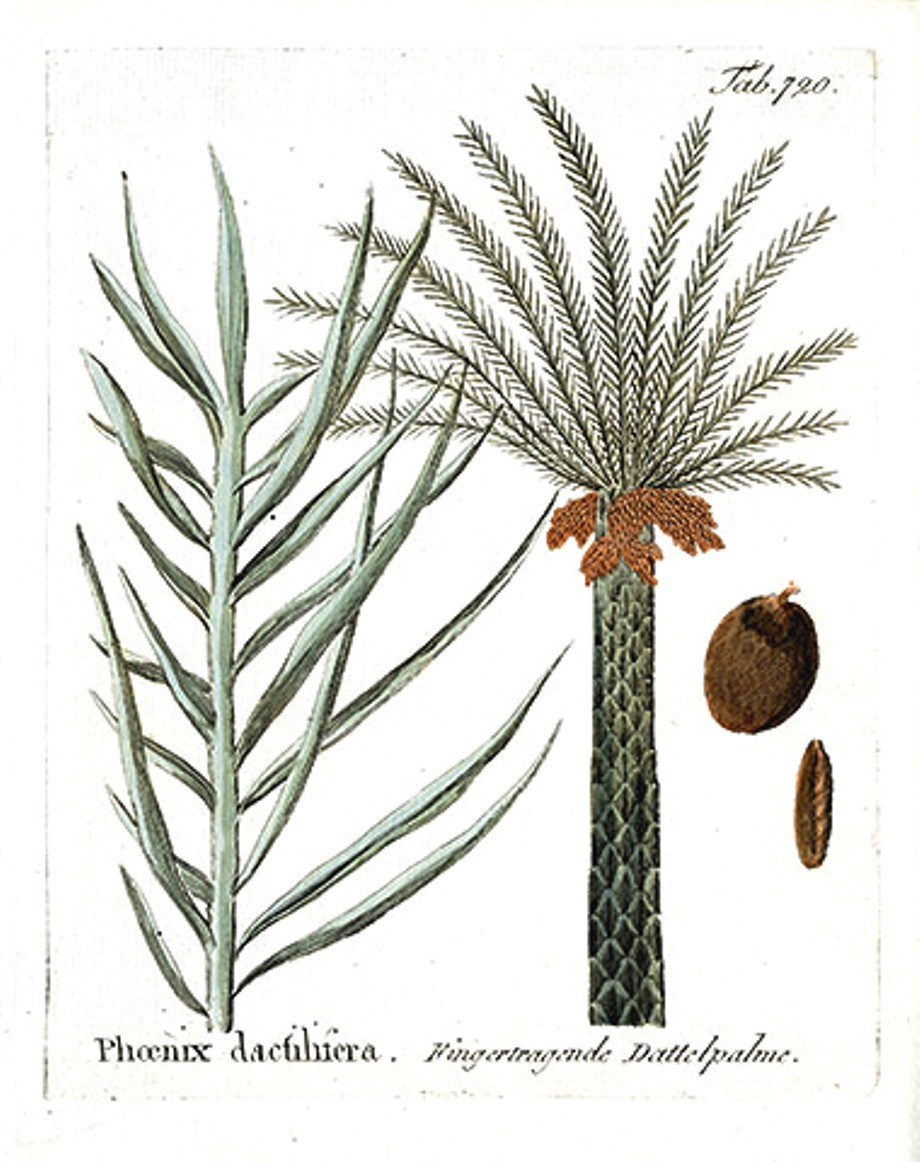 Description –
The Phoenix dactylifera is an imposing palm, with a very slender trunk, which can reach 30 meters in height, visibly covered by the remains of the sheaths of fallen leaves.
The leaves are gathered in a maximum number of 20-30 to form a sparse apical crown; these are pinnate, up to 6 m long, with the upper ascending and basal curves downwards, with coriaceous, linear, rigid and pungent segments, of green-glaucous color.
The flowers are unisexual carried on different plants (dioecious), they are small, of whitish color, fragrant, united in axillary spadixes up to 120 cm long and strongly curved for the weight of the fruits. The fruits, commonly called dates, are oblong berries , dark orange when ripe, up to 5 cm long in cultivated varieties, with sugary pulp, containing a seed of woody consistency.

Cultivation –
The Phoenix dactylifera is a plant sensitive to cold that grows well on soils of any nature, provided they are fertile and well-drained; in the mild climate regions, it is grown outdoors in sunny positions and is used above all as an ornamental plant for its slender posture and foliage.
In order for the fruits to reach full maturity, rather high temperatures (40 ° C) and considerable availability of water are required, which in culture is also supplied for irrigation.
The species multiplies by suckers or by sowing in the spring. For the details of the cultivation technique, see the following sheet.

Uses and Traditions –
The date palm was known since ancient times; it was considered a symbol of fertility by the Egyptians; depicted by the Carthaginians in coins and monuments and used by Greeks and Latins as an ornament for triumphal celebrations. In the Christian tradition, the leaves represent a symbol of peace and recall Jesus’ entry into Jerusalem. It is also mentioned seventeen times in the Koran. The cultivation of the Phoenix dactylifera was already known in antiquity among the Egyptians, the Carthaginians, the Greeks, the Romans, the Berbers for its edible fruits called dates.
Today it is cultivated throughout the Maghreb, in Egypt, Arabia, in the Persian Gulf, in the Canary Islands, in the southern Mediterranean area and in the southern United States.
The cultivation of the date palm, being very ancient and widespread now in various parts of the world, is characterized by the presence of numerous cultivars, of which the most widespread are: ‘Medjool’, ‘Deklet noor’, ‘Ameri’, ‘Deri’, ‘Halawi’ and ‘Zahidi’, ‘Berhi’, ‘Hiann’.Tra date varieties include the one defined as’ da starch’, from which we derive the so-called “bread of the desert”, which represents one of the fundamental foods of the Bedouins. The dates, due to their high sugar content, are a fundamental food for the populations of North Africa, Arabia, Persia, where hundreds of varieties are grown for commercial purposes. Almost all dates are dried in the sun, so as to increase the concentration of sugars. In this way they become sweeter and are kept longer. This feature makes them available throughout the year.
Some varieties (Berhi and Hiann) are sold fresh.
Finally, one of the most fearsome pests of this plant is Rhynchophorus ferrugineus, known as the red palm weevil. It is a curculionid beetle originating from Asia, recently propagated in the Middle East and subsequently to the entire Mediterranean basin, which proved to be resistant to all conventional means of control.

Preparation Mode –
Dried dates are darker and wrinkled, with an irregular oblong shape, fresh ones are smooth and perfectly cylindrical. Dates can be eaten alone, in desserts, or with all tasty cheeses.
As mentioned, some varieties (Berhi and Hiann) are marketed fresh.
Date syrup, which is obtained by boiling the fruit in water, is considered a good remedy for coughs and colds.