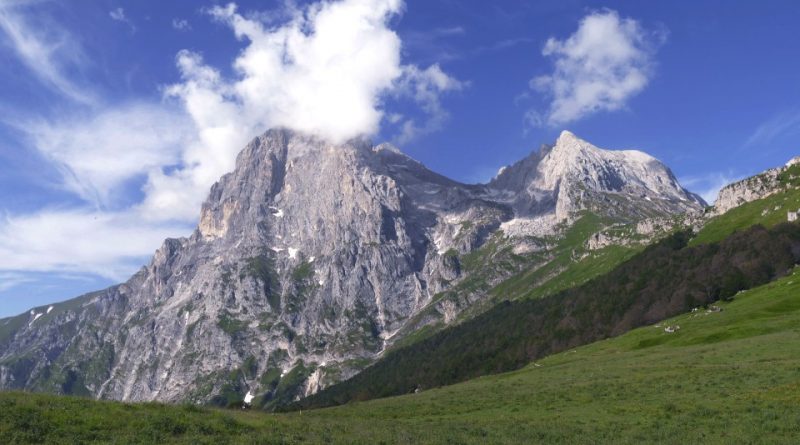 The Gran Sasso and Monti della Laga National Park, identified by the codes: WDPA 63642 and EUAP 0007. It is one of the most extensive parks in Italy, with its 141.341 hectares.
The Gran Sasso and Monti della Laga National Park was established in 1991 and is the third largest protected nature reserve in Italy for territorial extension. Within the Park there are three mountain groups: the Gran Sasso d’Italia chain, the Laga massif, the Gemelli Mountains and, within its territory we find the highest peak of the Apennines, the Corno Grande, with its 2912 meters of height. On this chain there is also the only Apennine glacier, the Calderone, the southernmost in Europe.
The Gran Sasso and Monti della Laga National Park is located for the most part in Abruzzo (province of L’Aquila, Teramo and Pescara) and to a lesser extent in the adjacent areas of Lazio (Rieti) and Marche (Ascoli Piceno), in the territories of the Gran Sasso mountain community, Campo Imperatore-Piana di Navelli mountain community, Laga mountain community, Velino mountain community and Tronto mountain community.
The territory of the parquet divided into 12 districts:
– Campo Imperatore, area of ​​the upper Aterno valley, whose heart is between Assergi and Rocca Calascio;
– Between the two kingdoms, straddling the old border between the Papal State and the Kingdom of the Two Sicilies (hence the name); the district is located in the municipalities of Campli, Civitella del Tronto, Torricella Sicura and Valle Castellana;
– Waterfalls and woods;
– Strada Maestra, includes the route of the old State Road 80 of the Gran Sasso of Italy;
– Sicilian Valley, takes its name from the Sicilian Mendoza family who held the fief of the Vomano valley, in the territory of Tossicia, Isola del Gran Sasso d ‘Italia and Pietracamela;
– Valley of the Great Abbeys, takes its name from the large number of ancient churches in the Teramo area of ​​the Valle del Vomano, which can be visited in the itineraries of the towns present. The territory is that of Castel Castagna, Morro d’Oro, Canzano and Notaresco;
– Valle del Tirino, takes its name from the river that crosses the municipalities of Capestrano, Bussi sul Tirino and Ofena;
– Terre della Baronia, containing numerous characteristic villages of Abruzzo, including Santo Stefano di Sessanio, Calascio and Castelvecchio Calvisio;
– High peaks, elevated area of ​​the district of L’Aquila, including the territory of Assergi;
– Upper Aterno valley, including the territories of Barisciano, Calascio and Assergi;
– Sorgenti del Tronto, in the municipalities of Amatrice and Accumoli;
– Via del Sale, an ancient Roman-Piceno road, including the territories of the Val Vomano, crossing the Sella di Corno pass (Antrodoco-L’Aquila), then the Capannelle pass (Montorio al Vomano), the Teramo area up to port of Giulianova.
The Municipalities that fall totally or partially within the Gran Sasso and Monti della Laga National Park are:
– Province of L’Aquila: Barete, Barisciano, Cagnano Amiterno, Calascio, Campotosto, Capestrano, Capitignano, Carapelle Calvisio, Castel del Monte, Castelvecchio Calvisio, L’Aquila, Montereale, Ofena, Pizzoli, Santo Stefano di Sessanio, Villa Santa Lucia Abruzzi.
– Province of Teramo: Arsita, Campli, Castles, Civitella del Tronto, Cortino, Crognaleto, Fano Adriano, Island of Gran Sasso of Italy, Montorio al Vomano, Pietracamela, Rocca Santa Maria, Torricella Sicura, Tossicia, Valle Castellana.
– Province of Pescara: Brittoli, Bussi sul Tirino, Carpineto della Nora, Castiglione a Casauria, Civitella Casanova, Corvara, Farindola, Montebello di Bertona, Pescosansonesco, Villa Celiera.
– Province of Rieti: Accumoli, Amatrice.
– Province of Ascoli Piceno: Acquasanta Terme, Arquata del Tronto.
Within the Park there are also the Natural Reserves: of the Corno Grande of Pietracamela, of the Lake of Campotosto and the Regional Reserve of Voltigno and Valle d’Angri.
Furthermore, within the Gran Sasso and Monti della Laga National Park we find a flora and fauna characterized by a wide spectrum of biodiversity, a factor linked also to the great internal difference of the Park’s habitats. 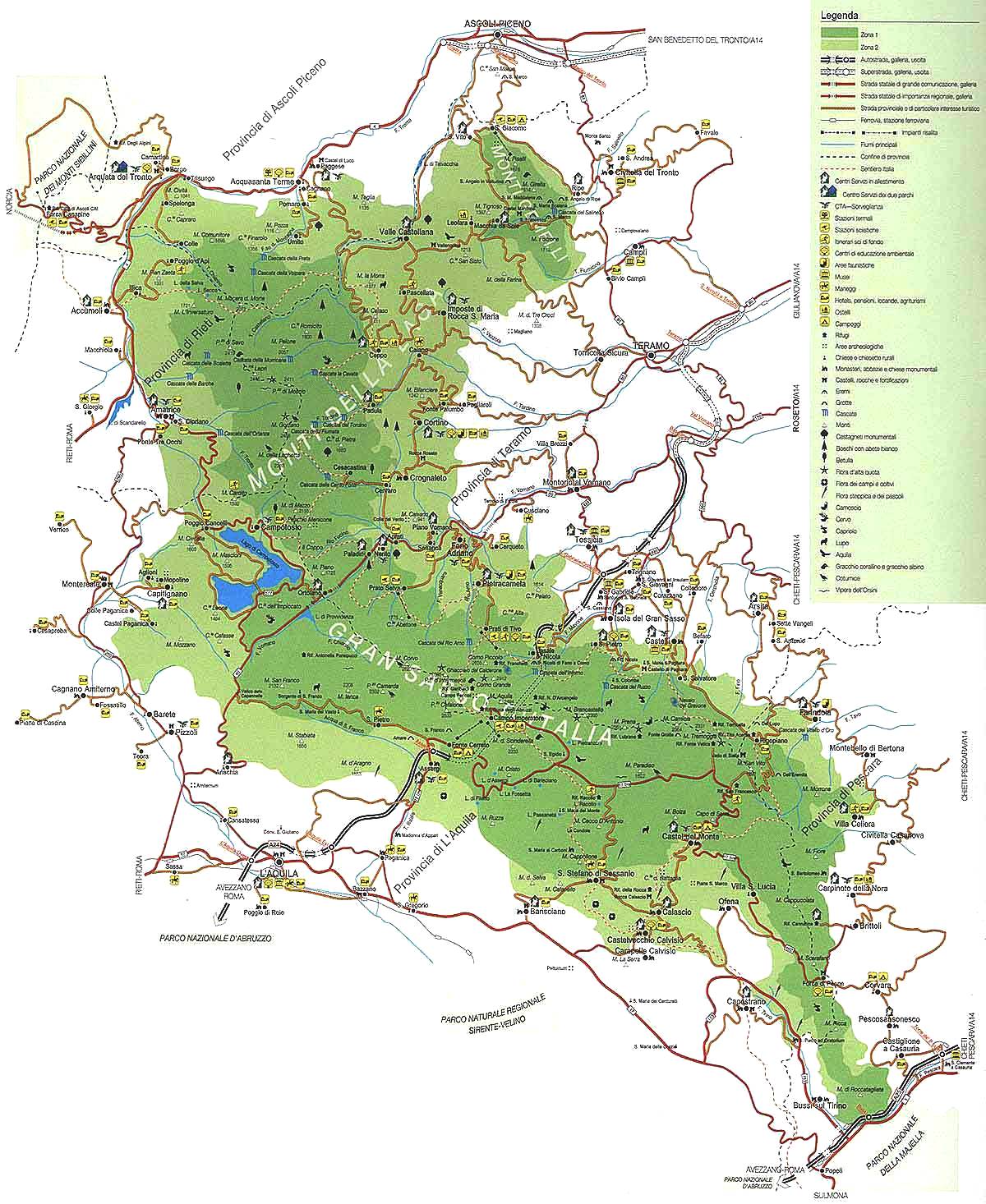 Flora –
The flora of the Gran Sasso d’Italia and Monti della Laga National Park changes from the south-eastern part of the Gran Sasso d’Italia chain, the L’Aquila side, towards the northwest, the Teramo side, where we find an environment totally different. In the area to the south-east the woods are present only at relatively low altitudes and are mainly composed of black pine and oaks (Castel Del Monte area, Santo Stefano di Sessanio, Barisciano and San Pio delle Camere). Going further up we find only pastures and only in the area of ​​Fonte Vetica there is a small area with fir and birch trees.
At medium altitudes are found: oaks, downy oaks, ornielli, laburnums, wild apple, cornelian, gentian, the latter species particularly present on the Gran Sasso (L’Aquila side) which represents a protected species although collected by the locals to produce the famous gentian liqueur ; we also find the juniper (also a protected species) present above all on the top of Pizzo Cefalone. Going up towards the high zone and in the plain of Campo Imperatore we find only pastures.
Passing through the northernmost area of ​​the Gran Sasso (Teramo side), there are mainly large beech woods that make the area truly striking, especially in the area of ​​Pietracamela, a small village at the foot of the Corno Piccolo.
The tree species present are: yew, holly, maple, mountain ash and numerous silver fir nuclei. Some species deserve a special mention: we recall the herbaceous willow, the Alpine star of the Apennines (quite common on the Gran Sasso and representing an extremely protected species), the magellense buttercup, the ear ear primrose but also the curved adonide, the Alpine poppy, the Aquila astragalus, the Alpine soldanella and the Apennine anemone.
A mention of the fungal species; among these we remember, in the area of ​​Campo Imperatore and in the area of ​​Montecristo, the champignon (Agaricus Campestris) as well as many other species of mushrooms such as porcini and tufted ducks that populate the woods of the park.

Fauna –
Within the Gran Sasso and Monti della Laga National Park we find, as mentioned, a large population of mammals and birds. Obviously the most representative species of the Park is the Abruzzo chamois, an endemic ungulate of the Apennines, which until the century last had its stronghold in the Gran Sasso. The direct persecution of the “camozze hunters” caused the disappearance at the end of the 1800s. After a hundred years the chamois returned to the Gran Sasso thanks to a successful reintroduction operation (between 1992 and 1999) and a population that stood at 662 in 2015.
Inside the Park there are other large herbivores such as the deer (reintroduced in 2004) and the roe deer, and their predator par excellence, the Apennine wolf, which is reconstituting small herds. The Marsican brown bear has also appeared sporadically for some time. Other mammals include fox, wild boar, marten, wild cat, badger, stone marten, polecat, porcupine and several other rodent species. The lynx was also reported. At higher altitudes, the snow vole meets, which is a small rodent, arrived with the last glaciation and remained as a glacial relict.
Among the birds there are some rare birds of prey such as the golden eagle, the goshawk, the peregrine falcon, the lanner, the kestrel, the chariot and the eagle owl. However the most representative avifauna is that of the highest altitudes with: Alpine finch, spioncello, pispola and sordone. We also find the rock partridge, the redstart, the alpine chough and the coral chick. Furthermore, there have been sightings of different specimens of heron near Lake Campotosto and in the municipality of Crognaleto.
Among the pastures, the lower areas and the traditional cultivations we find species such as the ortolan, the cappellaccia, the calandro, the passia lagia and the having it small.
At the highest altitudes, in the prairies, there is the ideal habitat for the Orsini viper, a small snake that feeds on insects, present with the largest national population. Among the other species of snakes we include the columbus of Aesculapius and the Austrian Coronella. In the Park there is obviously no lack of amphibians, with Apennine endemisms such as the spectacled salamander and the geotritone, inhabitant of the caves. On the Monti della Laga the presence of the Rana temporaria and the Alpine newt is very localized, which can be observed only in a restricted area of ​​Calabria throughout the Central-Southern Apennines, as well as in the Park. We also find the Tritons: the crested and the common.