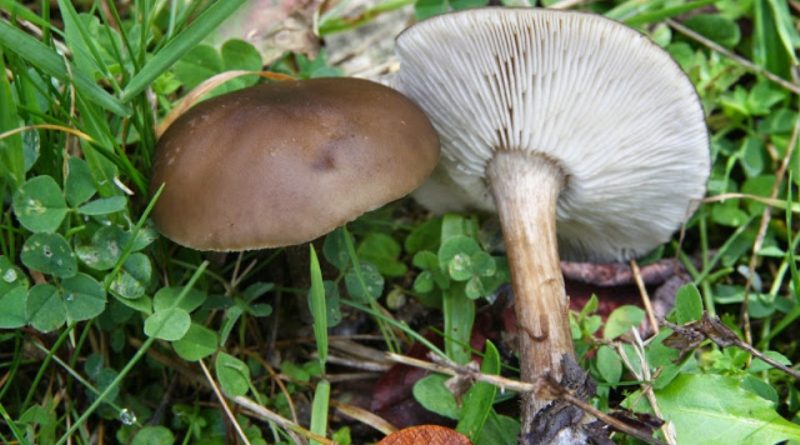 Geographical Distribution and Habitat –
Melanoleuca melaleuca is characterized by growing in clearings, meadows and pastures and at the edges of broad-leaved and coniferous forests. The fruiting period occurs between summer and autumn. It is a widely distributed species; known from Asia, Africa, Europe and North America and Oceania. Moreover, like all Melanoleuca it is a saprophytic species that feeds on organic waste and is not associated with particular types of trees.

Recognition –
This mushroom is recognized by the fleshy cap, 3-8 cm in diameter, convex and then flattened, umbonate, with a color ranging from gray-brown to dark gray. The lamellas are white, dense, ventricose and attached to the stem.
The stem is 6-10 x 0.6-1.2 cm, whitish, with brownish, cylindrical, elastic and slightly enlarged at the base.
The flesh is whitish in color and slightly tinged with ocher in the section, with a slightly floury fungal odor and mild flavor and a particular flavor.
At the microscope, white spores in mass, amyloid, can be seen.

Cultivation –
Melanoleuca melaleuca is not a cultivated mushroom.

Uses and Traditions –
The Melanoleuca melaleuca is a fungus that is not easy to distinguish from other related species in the first place because it presents a certain variability and also because the taxonomic criteria are often based on characteristics that later were found to be variable; there is also a great deal of disagreement between various authors on how exactly the species should be defined.
This difficulty is also linked to the confused taxonomic definitions, for which this fungus is very difficult to identify with certainty. Various authors consider that around M. melaleuca there is a complex of closely related species without clear division lines. Among the species that can be confused with M. melaleuca is the Melanoleuca polioleuca. According to Courtecuisse, M. polyoleuca is distinguished by having a pruinose layer on the stem and by the flesh inside the stem which is dark cinnamon rather than pale in color.
The Melanoleuca melaleuca is reported, however, to be edible and the possible confusion described above does not imply any particular culinary danger because (as far as is known) even closely related species are edible.

Preparation Mode –
For this species, which is classified as fairly edible, there are no particular indications in the preparation but it is believed, however, that the preparation after cooking and its preservation give it good reliability.