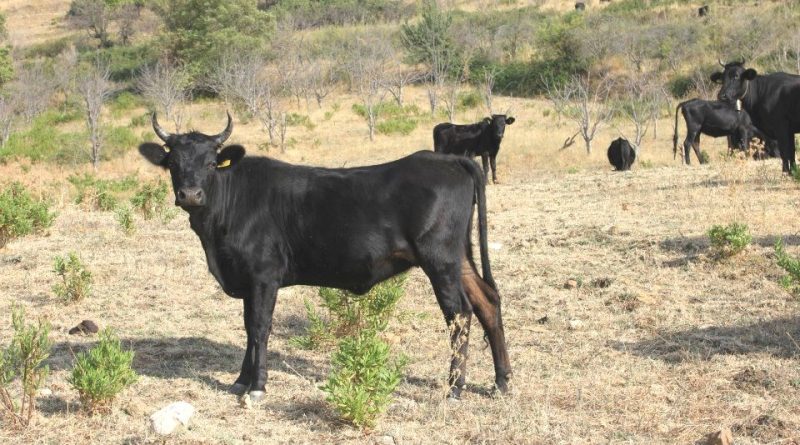 The Cinisara is a bovine breed (Bos taurus Linnaeus, 1758), native, Sicilian, with a dual attitude, widespread especially in the territory of Cinisi (PA).

Geographic and Area Distribution –
The Cinisara is a dual-purpose native Sicilian bovine breed that would have remained pure due to the particular territorial isolation due to the conditions of the original breeding area. This area is in fact made up of the mountainous area that overlooks the western coast of the Province of Palermo and corresponding to the municipalities of Cinisi, Terrasini, Torretta and Carini. It is a band of carbonatic mountains that overlook this coastal territory. Today Cinisara is mainly raised in the northern part of Sicily, especially on the coasts of the provinces of Palermo, Trapani, Messina and in some hilly areas of the inland of the Aggrentino.

Origins and History –
The Cinisara breed boasts ancient origins. There are records on the same in archives dating back to 1200, kept at the monastery of San Martino delle Scale.The Cinisara belongs to the group of Podoliche, differentiating itself as a local ecotype from Modicana, which is a similar breed, but more productive than it also thanks to the most favorable breeding environment, represented by pastures located in hilly and mountain areas. The Cinisara breed was recognized as such at the end of 1995. Since 1975, however, it was included in the Modican genealogical book even though, since the early ’80s, it was considered a well-defined population of all respect, both for the profile functional that morphological. It was during this period that, especially the researchers of the Faculty of Agriculture of Palermo, together with the breeders, confirmed, in various scientific conferences and exhibitions, the peculiar characteristics of this population as a premise for the distinction in race to self. The Cinisara breed is part of the registry of the autochthonous bovine populations and of limited-spread ethnic groups, established in 1985. This Register was established to safeguard the endangered breeds of cattle that are bred in Italy and for the protection of these genetic heritages. In 2000 the total number of breeders was estimated at 3,500 heads as reported in the Rural Development Plan of the Sicilian Region drawn up pursuant to Reg.EC 1257/99 (GURS nº5 dated 02/02/2001). This breed is still considered still in danger according to the risk categories of the FAO.

Morphology –
The Cinisara breed is characterized by a coat, of a uniform black color although in some cases there may be a size similar to the Pinzgau. It is a small breed of cattle with a height of 130-140, cm and weight of adults of 700-800 kg. It has direct horns first laterally and then upwards.

Productive attitude –
The Cinisara breed can be considered of good rusticity with a prevalent attitude to milk production. They are animals with excellent grazing ability. This breed, in fact, because of the remarkable rusticity, molded over time, sometimes due to the lack of other essences certainly more palatable, has developed a high degree of adaptation even to essences that are usually not palatable and poorly pabular (such as Trigonella spp etc) but very rich in anti-oxidant substances that are then transferred into milk or meat. As for its production capacity, the Cinisara breed exceeds even 3000 kg of milk, per lactation, with 3.5% fat. Also with regard to meat production, interesting data are found. Cinisari vitelloni have recorded daily increases that approach the kilo, with a live weight at the age of about two years exceeds 500 kg and with a heat yield close to 60%. For this reason the request for the obtaining the PDO “Carne di Cinisara” at the Ministry of Agricultural, Food and Forestry Policies undertaken by the Consortium for the Protection of Beef Cinisara of Palermo.