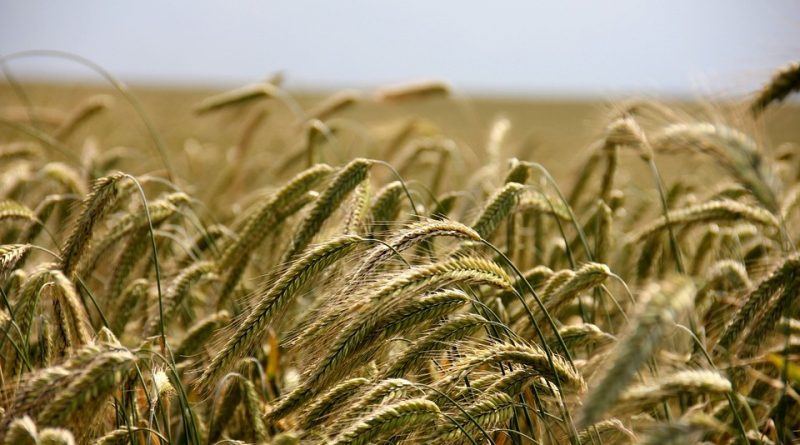 The rye (Secale cereale L., 1753) is an herbaceous species belonging to the Poaceae family.

Systematic –
From a systematic point of view it belongs to the Domain Eukaryota, Kingdom Plantae, Subarign Tracheobionta, Superdivisione Spermatophyta, Division Magnoliophyta, Class Liliopsida, Order Cyperales, Family Poaceae and then to the Gender Secale and to the Species S. cereale.

Etymology –
The term Secale is a name of an assonant exotic origin with self-mowing. The specific epithet of cereal comes from Ceres Cerere, the Latin goddess of the harvest and from metonymy the same crops and wheat: related to the care of the fields and crops.

Geographic Distribution and Habitat –
Rye has origins that are not perfectly defined; however, it seems to have originated from one of the territories of Asia Minor. It is a typical species of cold climates and sandy and acid soils and is widely cultivated in the northern countries of Europe and Canada, the United States and Japan. In Italy it is cultivated on just 6000 hectares and tends to decrease in step with the depopulation of marginal mountain areas. In Italy the culture is mostly distributed in the mountainous areas of Piedmont, Trentino and Lombardy. 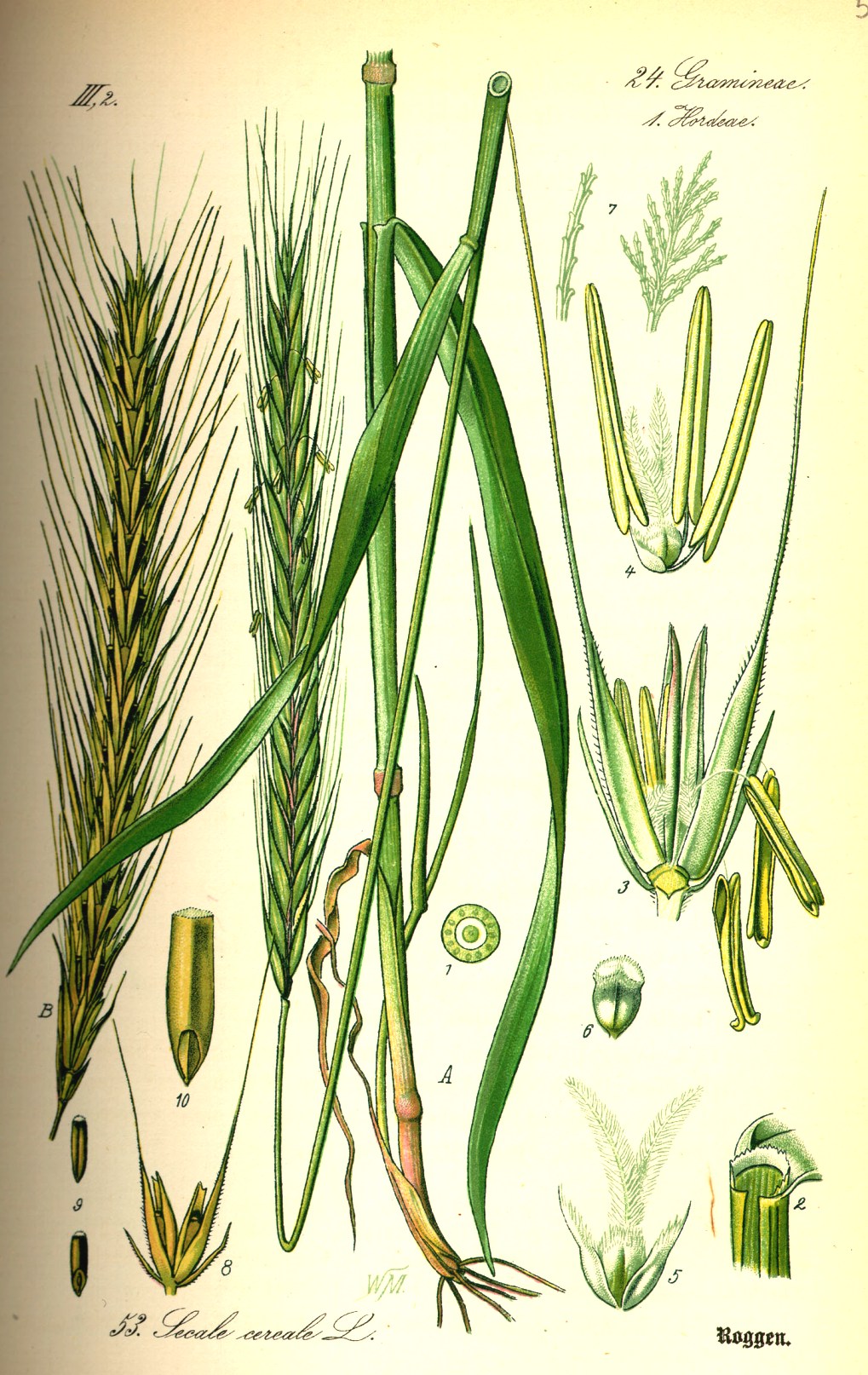 Description –
Secale cereale is a species with botanical characteristics similar to those of wheat; it stands out because the plant has a ligula without the falciform appendicles embracing the culm, common to wheat and barley, and also the ligula itself is short, toothed with short and triangular teeth. It has a culm formed of various internodes, very high (1.5-2 meters) and thin, but flexible and elastic, with glaucous green leaves, short lamina and narrower than wheat. It has a terminal spike, usually long and thin and brings to each tooth of the rachis a spree of normally trifora, but with the third sterile flower, for which there are 2 kernels for spikelet.The fruit is a cylindrical kernels, pointed to the end bearing the embryo, hairy and truncated at the other end. The rye is an allogenic plant, with anemophilous pollination, which requires cross-fertilization due to a self-incompatibility system.

Cultivation –
Rye is a cereal that adapts to climates and difficult and marginal agriculture (lands of Langhe and moors or mountain); it is in fact a very rustic plant that makes it produce more wheat and barley in acid, sandy, lean soils; has excellent resistance to cold; fewer thermal requirements to complete its vegetative cycle which is much lower than wheat and other cereals. The rye keeps the same place of wheat in the rotation, and is often alternated with the potato in mountain areas; it supports better the wheat and it is preferable when they are put to cultivation of the uncultivated. For sowing, a seed quantity equal to or slightly higher than that of the wheat is used, which, due to the scarce potency of the rye, is distributed in advance of the wheat itself, between the end of August and the end of October, depending of latitude and altitude. Spreading is still very frequent. The cultivated varieties can be distinguished according to the color of the caryopsis, white, greenish, gray or black; depending on the development of the reste; depending on the time of sowing, autumn or spring (the latter is exceptional). In addition, rye less than wheat and with greater delay, while in the later stages of vegetation is faster and earlier. For details of the cultivation technique refer to the following sheet.

Uses and Traditions –
Secale cereale is one of the classic cereals of antiquity. Its origin dates back to 2000 – 3000 years ago in the wheat fields of Asia Minor where it initially grew as weed and where it was widespread in mixed cultivations. Today rye is used mainly in Central and Eastern Europe and in Scandinavia to produce the Rye bread. Currently, 10 million hectares of rye are grown in the world, with a production of over 20 million tons. Its cultivation is extremely localized to very cold countries by latitude or altitude, thanks to its extraordinary resistance to the cold that allows it to sow autumn even in prohibitive climates for any other cereal. This species exists in winter and summer varieties. In Central Europe it is almost exclusively grown winter rye, which makes better use of winter moisture and is more resistant to spring drought, giving a better harvest. Summer rye is grown only in regions with the risk of late frosts and in exposed mountain locations. The rye has properties of cooking flour other than those of wheat flour since in the rye paste the molecules of gluten, a sticky protein, can not build any glue structure for the retention of gas due to the presence of pentosans (viscous substances ). These viscous substances perform in the rye the same function as gluten in wheat. They are important for binding and maintaining water during pasta preparation and in the cooking process. With rye flour they often prepare multigrain bread and whole wheat bread. However, in order to obtain products that can be sold on the market, rye flour pastes must be acidified, ie they must be added with the addition of sourdough. The rye-based bakery products are distinguished from those based on wheat for the darker, hard and aromatic dough. Rye bread consists mainly of gelled starch; its mollìca is thicker and contains less pores, so it is less aerated than wheat bread. The particularly high content of lysine makes rye an important component of a balanced diet. Rye is in fact interesting in human nutrition, especially for the so-called pentosani, both from the point of view of the physiology of food and as regards the cooking technique. According to several partially contradictory researches, the pentosans and consequently longer stay of the food bolus in the digestive tract should have an anticancer effect. Rye contains starches and vitamins from group B and E, provides a good amount of fiber and is rich in protein and minerals. Because of these properties, it helps those who lead a sedentary life, suffers from high blood pressure or has circulation problems because it helps to thin the blood. Rye is recommended for those who have to follow a weight loss diet because, compared to other cereals, it has less calories and has the ability to absorb large amounts of water thus increasing the sense of satiety. Finally, it is useful for those with liver problems because it stimulates their activity.

Preparation Mode –
In the kitchen, rye is mainly used in the form of flour for the production of bread and baked goods, but you can prepare various dishes such as soups, salads and flans. Below are some examples of preparation that go beyond the use of rye flour, bread and pasta.
Rye soup. Toasted rye flour obtained by grinding the grains. Add lukewarm water, add cumin seeds, minced onion and salt. Bring to a boil and then continue to cook over moderate heat. Once ready add to the soup soy sauce, a little olive oil and chopped parsley. As a thickener you can use the gomasio and add a little ‘cream for the greedy version.
Sweet rye. The rye soup is also good in a sweet version. Toast the farricello, stretch it with warm slightly salted water and cook over a moderate heat. Once ready, sweeten with honey, add the cream and sprinkle with pine nuts. Salad. Boil the rye beans and let them cool down well. Cut the apples and cucumbers into cubes and slice the radishes. Prepare a sauce with oil, lemon juice, yogurt and chopped onion. Add the fruit and vegetables to the rye and season with the sauce. Choose between seasonal vegetables as you wish.
Aromatic rye. Boil the rye in beans by adding the laurel and the onion to the cooking water. When it is cooked, remove from heat and let stand for 10 minutes. Finally season with chilli, a mixture of basil, parsley, marjoram, cumin – or the herbs you prefer – and a drizzle of oil. Serve sprinkled with gomasio.
Flan. Boil the rye in beans. Once they are ready and tender, season with ricotta or curd. Stir in the eggs, season with salt, pepper and chopped chives, parsley and capers. Oil a baking sheet and pour the mixture. Cook at 200 degrees for about 35-40 minutes.