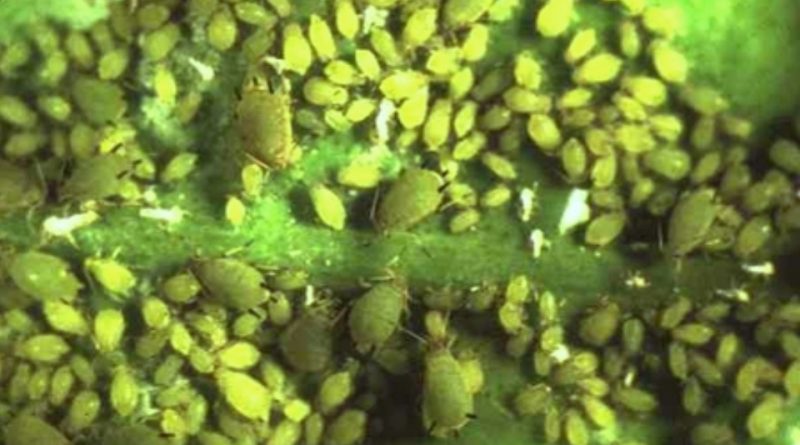 Geographic Distribution and Habitat –
The green citrus Aphid is an insect found in practically all the citrus areas of the world, especially on Mandarin, Clementine and Orange and on shrubby plants such as Crataegus sp. and Spiraea sp. Or on Shrubby Rosaceae.

Morphology –
The adults of the Aphis citricola measure about 1.5-2 mm of length (depending on whether they are winged or winged) with a greenish color; they also have syphons and a brownish codicle.

Attitude and biological cycle –
The Aphis citricola is the species, among the Aphids, more harmful to Citrus, where it particularly affects Mandarin, Clementines and Orange. This aphid, in the citrus areas, generally performs an anolyclo, where it winters as an adult female; subsequently, starting from spring there are several generations (that can even reach up to 40) that take place all on Citrus or on shrubby plants (such as Crataegus sp. and Spiraea sp.). The Afide can also perform a dioecious holoculture that takes place between shrub Rosaceas (as primary guests) on which it winters as a durable egg, and on Citrus or other tree or herbaceous species (as secondary guests). In general, therefore, the Aphis citricola has as primary guests rosaceae shrubs of the genus Spriraea on which lays the durable egg and carries out the first part of the cycle in spring and then migrates on citrus fruits that function as secondary guests. However, in the Italian citrus areas, this is a very rare behavior, for which the green citrus Afide multiplies analcyclically with numerous generations (as mentioned, even 40) and winters with parthenogenetic females on vegetative rickets.

Ecological role –
The Aphis citricola establishes various relationships within the citrus fruit or other species of the genus Crataegus sp. and Spiraea sp., of shrub Rosaceae or other tree or herbaceous species. It is therefore a polyphagous insect that however, from the economic point of view creates the biggest problems, as mentioned, on Mandarin, Clementine and Orange. The damage occurs on the buds and on the leaves, even if the Afide can also attack flowers and fruits. On the lower page of the leaves and on the shoots, it causes, with nutrition bites, some showy crumbling which hinder the development of the plant; when it attacks flowers and fruits, it can cause leaking and cascola. To the damage caused by the bites is added the abundant production of honeydew that smears the vegetation and allows the development of the smokes. To this scenario is added the spread of some virosis carried by Aphis citricola. The containment of this aphid passes through the careful application of some agro-ecological rules, often disregarded in citrus farms. Among these the containment of nitric fertilizers, a pruning that allows a greater aeration inside the canopy of the trees, the grassing of the land, and the presence of greater biodiversity of the production site, too often excessively specialized, which does not allow the ‘establishment of suitable biocoenosis between insects and various insects. In nature, the green Afide of citrus fruits is in fact controlled by numerous natural enemies such as the Crysopid Neuroptera, Coleoptera Coleoptera and the Syraphid Diatteri that are not always able to contain populations within the limits of damage, especially for the systemic imbalance caused both by the excessive cultivation specialization and by the indiscriminate use of various insecticides and pesticides which, in the end, benefit this aphid. The fight against Aphis citricola can also be chemical, but must follow the criteria of the guided and integrated struggle. In consideration of the danger for citrus fruits, the treatments are also performed at the appearance of the first infestations if the threshold of intervention is ascertained that for this aphid has been estimated for about 10% of the attached shoots. The products to be used can be specific aficidi and products in the medium-wide spectrum. However, the fight becomes, as mentioned, winning only in the preliminary productive organization of the citrus groves which must be conceived with a criterion of agroecological equilibrium.