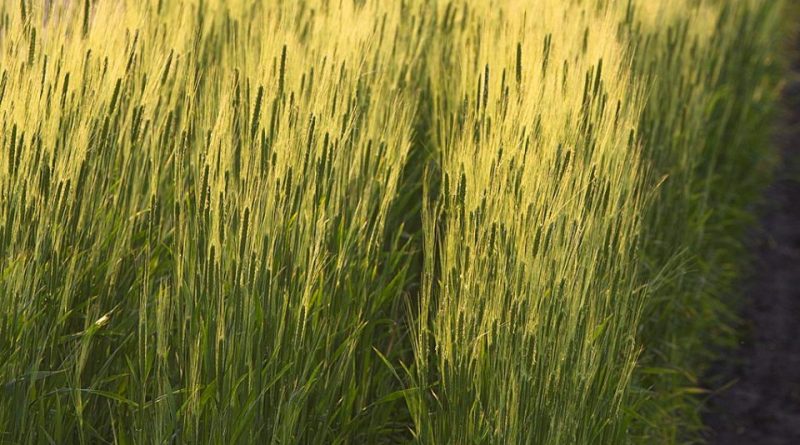 Systematic –
From a systematic point of view it belongs to the Eukaryota Domain, Kingdom Plantae, Magnoliophyta Division, Commelinidae Subdivision, Liliopsida Class, Poales Order, Poaceae Family, Triticeae Tribe and then to the Triticum Genus and to the T. monococcum Species.

Etymology –
The term Triticum, according to Varrone, derives from beaten tritum, for the use of beating wheat to separate the grains from the spikes. The specific epithet monococcum comes from the Greek μόνος mónos one, unique and from κόκκος cóccos hazel, berry, cuddle: because of the monosperm spikelets.

Geographic Distribution and Habitat –
The Triticum monococcum is a species that grows wild in the hilly areas of the northern part of the so-called fertile crescent and Anatolia, although it has a wide distribution that goes up to the Balkans and, to the south, to Jordan, near the Dead Sea. It represents the spelled of the most ancient origin and cultivation. The fossil remains discovered by its wild ancestor, Triticum boeticum, which are dated around the X-IX millennium BC, indicate its main center of origin in the mountainous areas of today’s Turkey; Small cultivated spelled seeds are traced from paleobotanica to the VII-VI millennium BC. 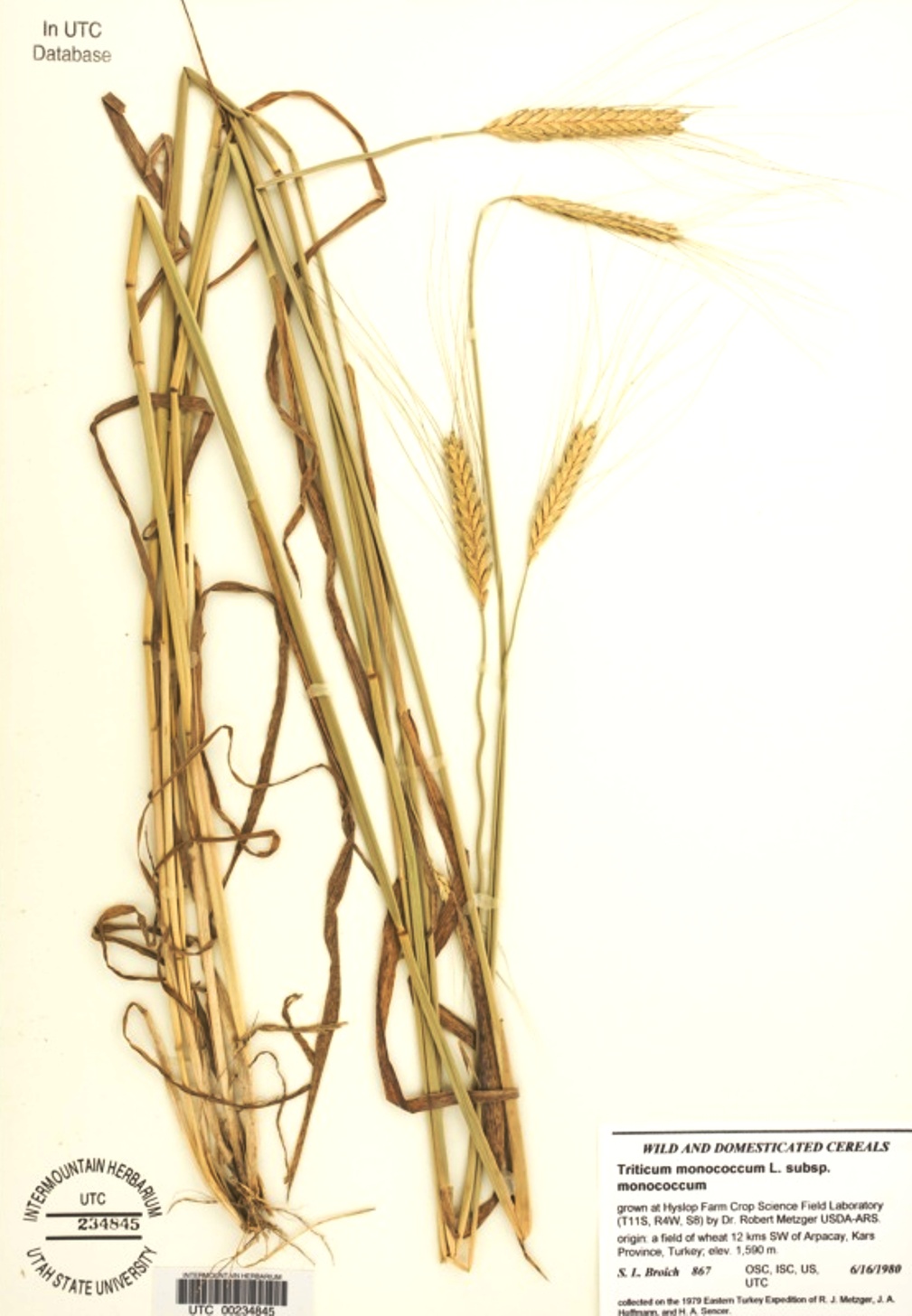 Description –
The spelled small or monocock is a species of the family of the diploid poaceae (2n = 2x = 14); it is characterized by a thin and weak culm, with a distal spike, aristata, laterally compressed. The spikelets have consistent glumes (the outer one, or lemma, is aristata, the internal one, or palea, is membranous), which enclose one, very rarely two, laterally crushed kernels, a semivitrea fracture.

Cultivation –
The small or monocock spelled, along with other spelled species, has a cultivation technique that, traditionally, is followed in the typical production areas in a simplified and in some cases rudimentary as regards the technical means used and the way they are applied, with limited or absent uses of synthetic chemicals and herbicides; also the use of fertilizers is nonexistent or limited to very reduced amounts of nitrogenous fertilizers. Seedbed preparation is not as accurate as that of other winter cereals. The current agronomic trend towards the simplification of processing, with a lower number and intensity of the interventions, presents aspects of great interest also in the case of spelled cultivation, for the advantages deriving from the reduction of the cost of processing and the containment of environmental impact, applying agroecological techniques of considerable interest. The sowing is normally autumn, except in environments at high altitudes where it is performed at the end of winter to avoid the risks associated with the very low temperatures of this season. In relation to fertilization, usually the letamation or the fertility left by the grass is sufficient medical. For details of the cultivation technique refer to the following sheet.

Uses and Traditions –
The small spelled is considered the first cereal “tamed” by man around 7500 BC, in the Middle East; it is the domestic form of the wild Triticum baeoticum. The two forms, wild and domestic, are considered separate species or subspecies: Triticum monococcum, subspecies T. baeoticum (wild) and T. monococcum subspecies. monococcum (housed). The cultivated form (domesticated) is similar to the wild one, except that the ear remains the same when it ripens, while the seeds are larger. It was precisely the Triticum baeoticum to be one of the first domesticated and cultivated plants. The first, clear evidence of the domestication of Triticum baeoticum is dated between 10600 to 9900 years ago, and found in two archaeological sites in southern Turkey. The main difference between the wild and cultivated Triticum monococcum is the dispersal of the seeds. In the wild variety the container of the seeds breaks and the latter are scattered on the ground. This facilitates a subsequent grain harvest. In the cultivated variety, the seed containers remain intact. Human intervention makes the difference. The collection of small spelled with intact containers was simpler for primitive growers. With time and through selections, conscious or not, man’s preferences for intact seed containers have created the domestic variety, which also has slightly larger grains than those of the wild Triticum monococcum. The small spelled requires sowing and harvesting by man to perpetuate its existence. An important feature that facilitates the domestication of Triticum baeoticum and other annual grains is that the plants are largely self-pollinating, so the desirable characteristic (for the human farmer) small spelled can be perpetuated with less risk of cross-fertilization with wild plants that may have less convenient features, such as smaller grains, seed dispersal, etc. Once tamed, the small spelled, from the northern area of ​​the fertile crescent, spread to the Caucasus, the Balkans and central Europe. The cultivation of Triticum monococcum in the Middle East began to decline in favor of spelled in 2000 BC. Its cultivation was never extensive in Italy, in the south of France and in Spain. The Triticum monococcum continued to be cultivated in some areas of Northern Europe during the Middle Ages and until the early twentieth century. The advantage of the cultivation of small spelled is that, even if it has a low yield, it can grow on poor, dry and marginal soils, where other varieties would not be successful. The small spelled, as for other ancient varieties of cereals, is grouped among the “Covered cereals”, since its core is not free from the coating of the seeds (gluma) with the threshing and it is therefore difficult to separate the slag from the grain. Today, the Triticum monococcum is a marginal cereal, which is rarely cultivated, although it has found a new market as a health food. The monococcus, from the nutritional point of view, differs from common wheat or hard wheat due to its high content of fats, phosphorus, potassium, pyridoxine and beta-carotene; substances that play an important role in cellular functions and are efficient antioxidant agents. In Italy the Triticum monococcum is grown in the province of Brescia, with the name of Shebar, in Piedmont, with the name of Enkir and in Sardinia. The average nutritional values ​​of Triticum monococcum are: Total proteins; 19.30%; Ash 2.41; Carotenoids, 10.40 mg / kg; Tocopherols (Vit. E), 94.40 mg / Kg. Microelements: Zinc, 50.00 mg / kg; Iron, 41.70 mg / kg; Manganese, 38.00 mg / kg Moreover, the small spelled has a low gluten content (around 7%), it is bread-making, but it does not rise much.