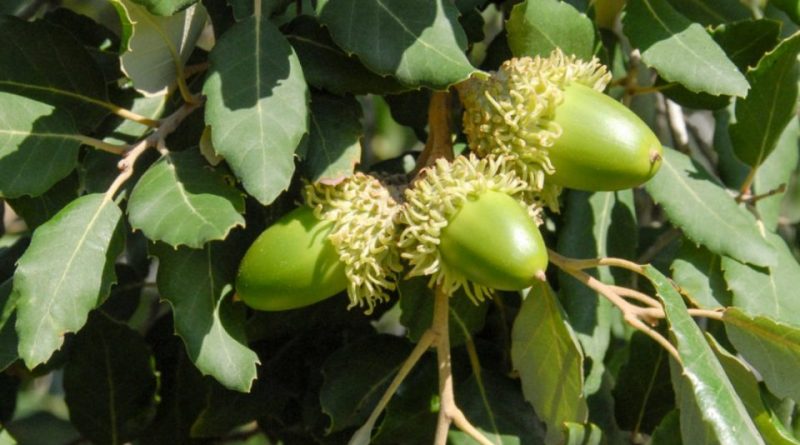 The cork oak (Quercus suber L.) is an arboreal species belonging to the Fagaceae family.

Systematic –
From the systematic point of view it belongs to the Eukaryota Domain, Kingdom Plantae, Magnoliophyta Division, Magnoliopsida Class, Fagales Order, Fagaceae Family and therefore to the Quercus Genus and to the Q. suber Species.

Etymology –
The term Quercus comes from the word quercus, the Latin name of the oak, a plant sacred to Jupiter. This term, according to some, is made up of 2 Celtic words, “Kaer” “quer” = beautiful tree, that is the tree par excellence; according to others it derives from the Greek Ruvido; with the term “suber” the Romans indicated both cork and cork oak. The specific epithet suber comes from suber, the Latin name for cork in Virgil and Columnella.

Geographic Distribution and Habitat –
The cork oak is a plant native to the Mediterranean basin, in an area between south-west Europe and north-western Africa; is a naturalized species from remote times and spontaneous throughout the western basin of the Mediterranean Sea, In Italy there are corks in Sicily, Lazio, lower Tuscany and especially in Sardinia. 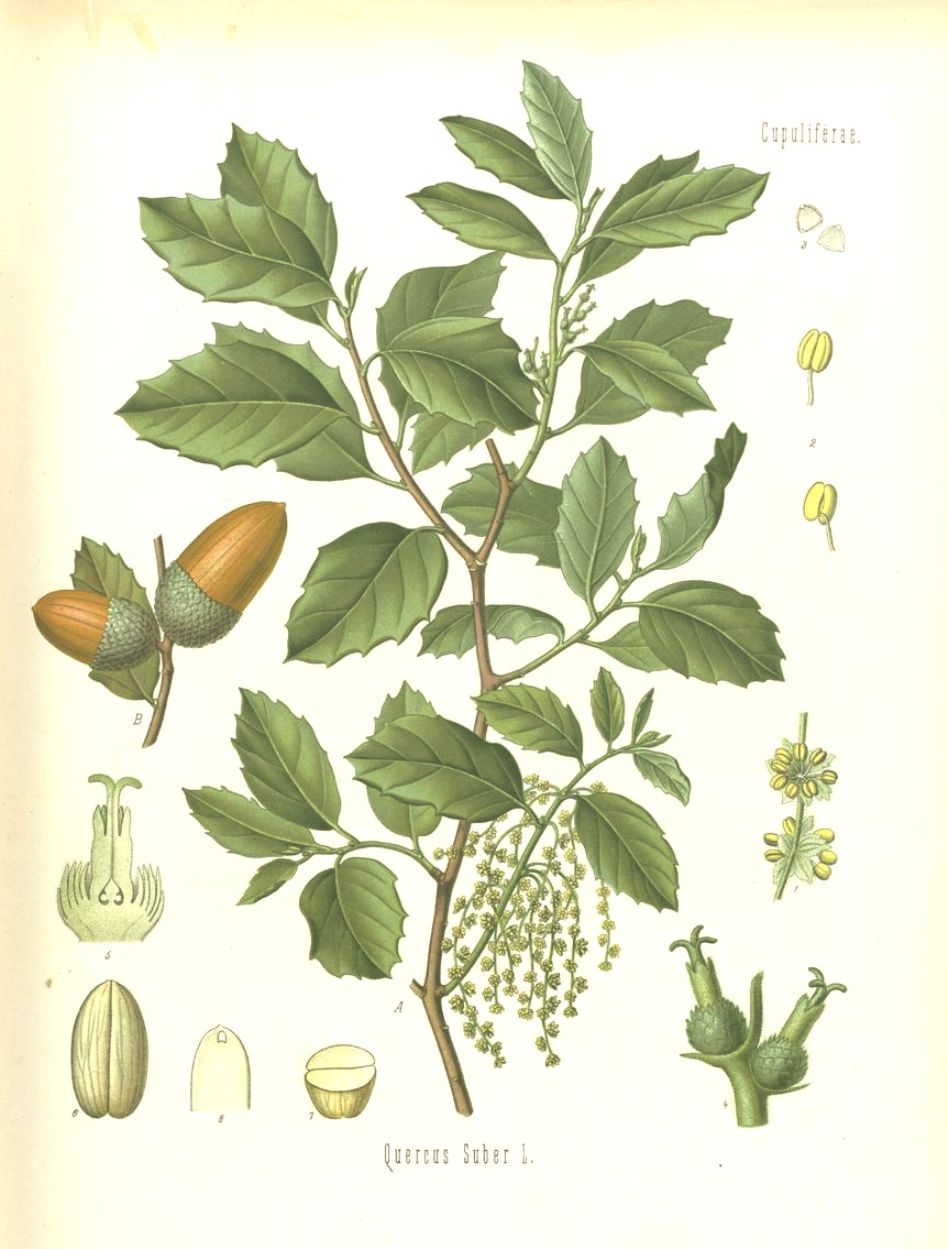 Description –
Quercus suber is an evergreen oak that can reach 20 meters in height, with greyish-green foliage. It has a trunk that soon becomes sinuous and is covered with a very characteristic bark, many centimeters thick, greyish, which is easily detached in large heavy blocks. At each detachment the new rind underneath has a reddish brown color, often almost reddish.The leaves are semipresistent, simple to lamina coriaceous (like the holm oak), ovoid, with dentate margin and thorny. It is a monoecious plant with unisexual flowers with flowering that occurs in late spring, or after the end of summer aridity (September-October); the male flowers are sessile with a perianth divided into 5-8 lobes and 5-6 stamens assembled in 4-7 cm long and pedunculated catkins, appearing on top of the branches of the previous year; the female flowers have the 4-6 lobed perianth with 3 styles in groups of 2-5 on the pubescent axis of spikes 0.5-3 cm long erected carried on the branches of the year. Depending on the period of the ants, the maturation of the acorns takes place respectively, in the autumn of the same year with a spring antesis, or at the end of summer and the beginning of autumn the following year in the case of an autumn antesis. The acorns have an ovoid shape and are 2-3 cm long and dome with raised scales.

Cultivation –
The cork is grown mainly in Italy, France, Spain, Portugal, Morocco, Algeria and Tunisia, with an annual European production of cork which amounts to 340,000 tons, for a total turnover of 1.5 billion euros, and with a workforce of 30,000 people. The propagation of the Sughera takes place by seed, immediately after harvesting, or by stratifying them in airy pits with peat or wet sand at 2-3 ° C and placing them in the ground the following spring. La Sughera, in theory it is possible can also be obtained by vegetative propagation, even if the percentage of germination is not high and the plants have very small dimensions (attempts in this sense have been made to try to improve the genetic heritage of the species in a forest nursery context).

Uses and Traditions –
Quercus suber is a very long-lived plant that can become centuries-old. It is a naturalized species from remote times already known by the Greeks and Romans who discovered that the cork was perfect to make floats for fishing nets and comfortable soles for sandals. Apparently, they also used corks for amphorae with cork. Today, around 50% of the world’s cork production is found in Portugal, more precisely in the Alentejo region, where 180,000 tonnes of cork are produced each year. It is often found in combination with pastoralism or cereal cultivation. Most cork companies are located in the Lisbon area and in the north of the country. In Italy and Portugal the freshly stripped trees receive a red mark on the trunk. If, for example, a tree has been stripped in 2003, it will be marked with a 3 so that the farmer will know that the tree can only be stripped back in 2012. The cork extraction takes place only in the period from early May to end August, when cork detaches more easily without causing damage to the plant. The first decortic of a young oak, the so-called “de tapping”, is carried out when the plant is about 25-30 years old and has a circumference of not less than 60 cm, and a mill cork called cork or male is obtained. Subsequent extractions take place at intervals of at least ten years, as required by the regulations, but also 12-13 if the cork has not reached an acceptable caliber, and the product obtained is called gentle cork and is used, if of good quality, for the manufacture of corks. The top quality cork discs are used for the production of bottle caps, those of second choice for upholstery or feet for beds, those of the worst category, instead, for the production of plywood, insulating material or pressed for the production of clogs for sandals. The first corks that are peeled have a rough surface and are therefore of poor quality, only the later ones have a smoother and therefore more refined surface. Since it retains its elastic properties even at high temperatures, cork is ideal for making engine gaskets. It is also an essential component of the heat shield of some spacecraft. Since many appreciate both the appearance and the insulating properties of this material, cork tiles have become very popular for covering walls and floors. In addition, for sporting goods producers, cork is invaluable because it is used in the core of baseballs and for the handles of fishing rods. The possibility of using Quercus suber as an ornamental plant is also interesting. In this context the Sughera is a plant with an extremely high will, because in addition to not being imposing and therefore difficult to place, it is an evergreen, with beautiful twisted branches and the whitish bark aesthetically very decorative. Suitable as an isolated specimen in medium-sized gardens, left to develop without intervening with pruning or decortication. Alternatively you can keep it at a stump.

Preparation Mode –
Quercus suber is a plant that in addition to industrial uses for the production of cork or as an ornamental plant does not have particular uses in the pharmaceutical or food field.