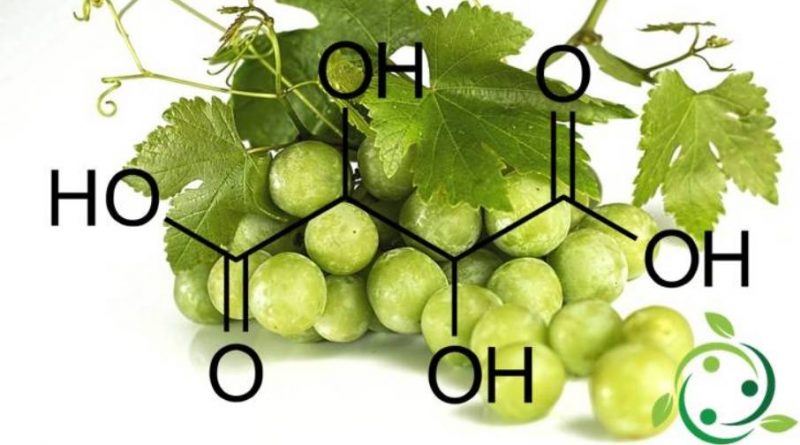 Tartaric acid, whose name in the IUPAC nomenclature is: 2R, 3R-dihydroxybutandioic acid is an organic acid; it has the brute or molecular formula: C4H6O6.The tartaric acid is a diprotic organic acid, of crystalline consistency and of white color and is a dihydroxylic derivative of succinic acid. It is found in the natural state present in many plants, especially in the grapes and tamarind and many fruits.Particularly important is one of its derivative salts, namely the bitartato of potassium, (also called creamy tartar) which naturally forms in the vinification process. In addition, tartaric acid is mixed with sodium bicarbonate and used as a leavening agent. In the food industry, tartaric acid is added to food as an antioxidant or to give a sour taste to drinks or food. Tartaric acid is a compound chiral, as it occurs in different stereoisomers. The most abundant stereoisomer in nature is L – (+) – tartaric acid or tartaric acid, specular, levotartaric acid or D – (-) – tartaric acid can be found from natural sources together with the form (+), but it is present in percentage usually lower. An achiral form, mesotartaric acid, is synthesized in the laboratory. The (+) – tartaric acid was the first chiral molecule to which it was possible, by means of X-ray analysis conducted by Bijovet in 1951, to assign an absolute configuration comprising the real spatial arrangement of the atoms that compose it.

L – (+) – tartaric acid is industrially produced in large quantities. It is possible to obtain starting from the lees which are by-products of the wine fermentation. The racemic tartaric acid can be prepared with a multi-stage reaction from maleic acid. In the first phase, the maleic acid is epoxed by hydrogen peroxide using potassium tungstate as a catalyst. Pure tartaric acid in high doses is highly toxic: the intake of 7.5 g / kg of this molecule causes the death from cardiovascular collapse and / or acute renal failure. If not promptly intervened, the lethal outcome occurs in a period of time ranging from 12 hours to 9 days after its administration. In any case, the probabilities of intoxication – at least for the involuntary one – are rather scarce: in fact, about 600 grams of tartaric acid are needed to kill a man of 80 kilos.Assunto within the recommended dosage, tartaric acid proves to be a composed completely harmless, since it is physiologically eliminated through the urine. Tartaric acid is used in cosmetics especially for its keratolytic, lightening and antioxidant capabilities; It is not by chance that it is often the dominant ingredient in moisturizing, exfoliating, anti-stain and anti-aging creams. Tartaric acid, in cosmetics, is indicated in the treatment of:

Mature, dry and slightly elastic skin; formulated together with moisturizing substances (eg cream with hyaluronic acid), tartaric acid effectively contrasts skin dryness of skin no longer very young, restoring as much as possible their natural softness lost over the years. Black spots and acne; tartaric acid exerts an excellent comedolytic activity, encouraging the emptying of cysts. Dark spots on the skin; tartaric acid exfoliates the skin by removing the superficial cells from the epidermis, while encouraging cell renewal. In this way, tartaric acid creams increase the brightness of the skin.Warning: the information reported is not medical advice and may not be accurate. The contents are for illustrative purposes only and do not replace medical advice.