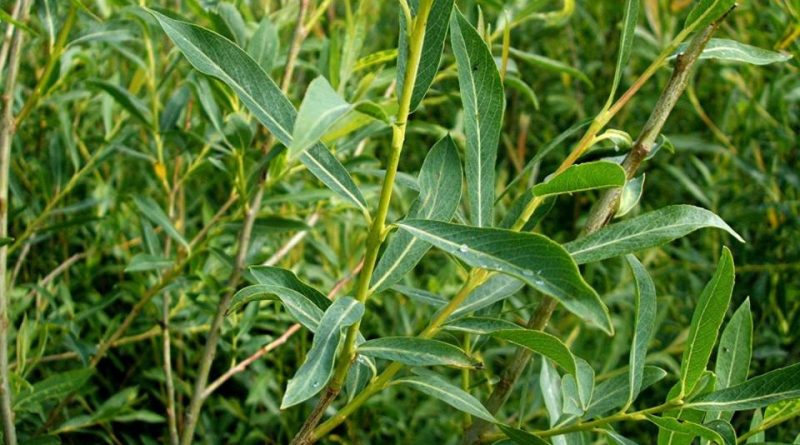 The red Willow (Salix purpurea L., 1753) is an arboreal species belonging to the Salicaceae family.

Systematic –
From the systematic point of view it belongs to the Domain Eukaryota, Kingdom Plantae, Subarranean Tracheobionta, Superdivisione Spermatophyta, Magnoliophyta Division, Magnoliopsida Class, Subclass Dilleniidae, Salicales Order, Salicaceae Family and then to the Genus Salix and to the Species S. purpurea.

Etymology –
The term Salix is ​​the classical Latin name of willow, perhaps associated with the Sanskrit saras acqua. The specific purpurea epithet comes from the Greek πορφύρεος porphýreos of purple red in reference to the catkins and the sprigs of reddish color.

Geographic Distribution and Habitat –
The Red Willow is a widespread species in an area between central and southern Europe, north-western Africa, western Asia and the Iberian Peninsula. Its natural habitat is that of the riparian zones, of humid wood and of the riverbed of rivers, streams and streams at altitudes between 0 and 600 meters above sea level. but it can grow up to 1,800 meters s.l.m .. 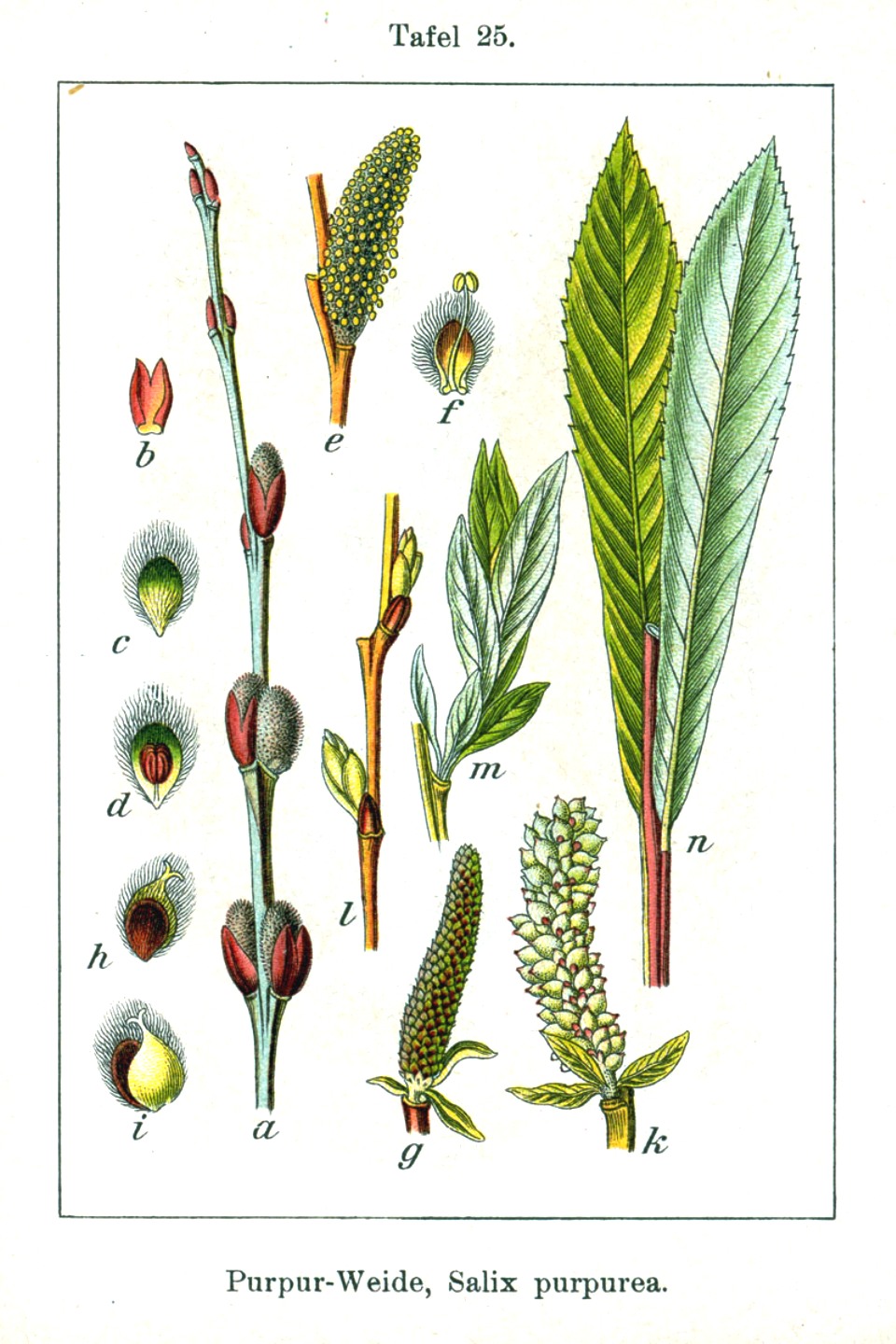 Description –
Salix purpurea is a deciduous and dioecious tree species that can grow up to 9 meters in height, with an upright habit. The trunk is greenish-gray with thin, glabrous, shiny young branches, which then become opaque, passing from purple to greenish or yellowish-gray shades.The leaves are lanceolate-oblong or linear-spatulate, glabrous, flat, with margin slightly tightened-lenticolate, with dark green coloring, opaque or slightly shiny on the upper page and glaucous and with very little secondary ribs evident in the lower one. Being a dioecious species, male and female flowers develop on separate individuals. The male flowers are erect, with 2 stamens joined together, anthers of purple-purple, yellow and then black; the female ones are arched and dense, sessile. Flowering is at the beginning of spring. The fruit is a 4-5 mm biocular hairy capsule.

Cultivation –
For the cultivation of the Red Willow consider that it is a tree that loves sunny areas, it adapts to almost all the land, even if it prefers the sandy ones, as long as there is a little water available, at least for the first year when its roots are not yet too developed. As for reproduction, it is a species that easily propagates by cuttings; we work by taking a branch of 50-60 cm, placed in the ground, taking care to leave out at least 10 cm; at this point only a little water will suffice, in case the soil will tend to dry out too much. The red Willow, like other willows, is in fact a species that easily roots that sometimes just leave a bundle of willows resting on the ground to find them rooted in a short time. You can also proceed by placing some branches in a bucket of water for a couple of weeks to find them then rooted.

Uses and Traditions –
Salix purpurea is one of the most active colonizing species of river gravels and wet soils near watercourses. It is in fact cultivated often and used alone, in groups for free hedges in parks and spontaneous gardens. For this reason it is suitable for covering wet slopes and reforestation of wet uncultivated areas. In ancient Greece the bark of willow, thanks to the presence of salicin, was also used as antimalarial and the leaves as fodder for sheep. The willow branches blessed on Palm Sunday were believed to protect against lightning, bad weather and evil influences. Galen recommended chopped willow leaves on fresh sores, Dioscorides claimed that the leaf had haemostatic and anti-fecundative properties. During the Middle Ages its greatest use was to calm sexual hyper-excitability. The febrifugal power will be recognized only at the end of the seventeenth century. In addition to phytotherapy, this tree has been used since ancient times as a means of tying together different parts with its very flexible branches. Its branches are in fact used for the creation of baskets and mats.The properties of this plant are linked to the presence in the bark of an active ingredient, the salicin, which has antifermentative, febrifugal, astringent and anti-rheumatic properties.In this willow’s detail, together to the other willows, it is useful as an anti-inflammatory, antinevralgic, febrifuge, gastro-enteric sedative, tonic, disinfectant, cicatrizant. It also turns out to be useful against fibromyalgia, atralgia, chronic rheumatic forms, insomnia. It reduces the rate of glucose in the blood and cramps of menstrual origin. It is therefore used for the following indications terpautiche: colds, fever, pain, rheumatism, arthrosis, arthritis. In the form of shampoo it is used as a repellent against lice. Given the high content of tannins, the bark, for external use, exerts a strong astringent action on the skin and on the inflamed mucous membranes and promotes the healing of wounds. The active ingredients contained are, in addition to salicin: wax, gum, tannins, flavonoids , phenolic glucosides, populine, salicular acid, isoquercetin, naringin.

Preparation Mode –
For the treatment of febrile conditions, rheumatic pains, digestive disorders, various preparations can be made. The parts used are: bark of the branches, the leaves and the amenti.Si decoction is used: 2 grams in 100 ml of water. Two to three cups a day; the tincture: 20 grams in 100 ml. of alcohol of 20 ° (to maceration for 10 days). Two to three tablespoons a day and the wine dye: 5 grams in 100 ml. of white wine (pulped for 10 days). A glass before meals.With the catkins you can prepare a very pleasant infusion particularly indicated in overworked and over-excitable. For external use, the decoction is used for irrigations, compresses and anti-rheumatic baths.