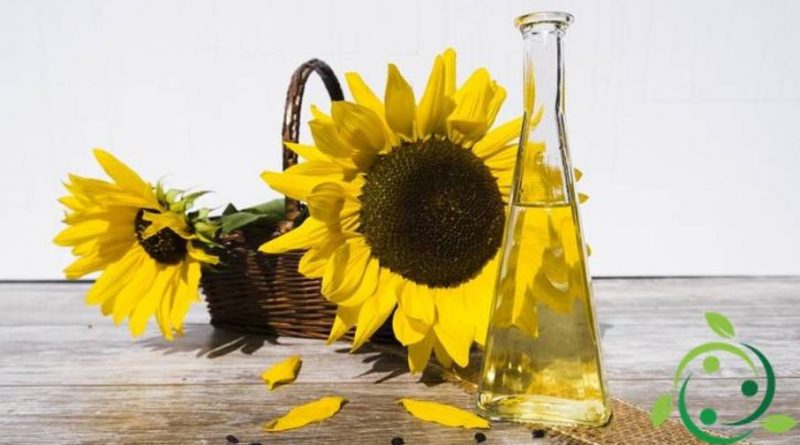 Sunflower oil is the oil extracted from the seeds of the sunflower plant (Helianthus annuus L.) and its various cultivars and genetic modifications created to modify the distribution of fatty acids. Sunflower oil according to the INCI classification is called: Helianthus Annuus Seed Oil; the high-grade varieties of oleic acid are called: Helianthus Annuus Hybrid Oil. Sunflower oil is rich in polyunsaturated fatty acids (40%), in particular linoleic acid and, if cold-pressed, is a very important source of vitamin And that is an antioxidant, so it helps to protect against oxidative damage of free radicals. It is widely used instead of olive oil to prepare desserts and savory dishes or vegan mayonnaise for its very neutral flavor. Contrary to what you think, sunflower oil is not suitable for frying because it has a very low smoke point, less than 130 ° C. It should be used raw and chosen an oil obtained by cold pressing to benefit from the protective effects of vitamin E. The sunflower oil contains triglycerides, with a high content of linoleic acid. This high percentage of polyunsaturated fatty acids makes it very susceptible to oxidation and rancidity phenomena. On the sunflower cultivated for seed oil production numerous genetic modifications have been made, the first of which is the one made in 1976 in Russia, creating the first mutant variety, Pervenets, with high oleic acid content. The mutation, obtained chemically, involved an oleic acid content even higher than 70%. Subsequently, with the traditional genetic improvement techniques, in the USA many hybrids were produced, in which the high oleic gene of Pervenets can be traced.

Nevertheless, although many cultivars have been developed both with chemical mutagenesis and with radiation, these varieties are considered natural not being obtained with transgenic interventions.For the high variability of the cultivars, the pedoclimatic conditions and the cultivation techniques, the composition of the oil of sunflower seeds can vary greatly. There are several sunflower oils with different composition. The main ones are: – SO, sunflower oil, Helianthus annuus – SOHO, oil with a high oleic acid content from seeds of a variety derived from sunflower – SOMO, oil with a medium oleic acid content from seeds of a variety derived from sunflower. The distribution of fatty acids to medium oleic sunflower oil is somewhat similar to that of olive oil. Sunflower oil also contains sterols, lecithin, tocopherols, carotenoids and waxes. Sunflower oil is liquid at room temperature. The refined oil is transparent, has an amber color and light fatty odor. The density at 20 and 25 ° C is between 0.918 and 0.923 kg / dm³ and the refractive index at 20 ° C is between 1.472 and 1.476.

Sunflower oil is used for frying, behaving like a typical vegetable oil composed of triglycerides. The varieties with the lowest iodine number, such as sunflower oil with a high oleic acid content, are more resistant to high temperatures. Other applications and uses are in the cosmetic field where sunflower oil is used as an emollient and skin softener. Unlike olive oil where the extraction is obtained by physical processes (kneading, squeezing, etc.) the extraction of six sunflower oil, as for other seed oils, is possible only through solvents or applying a very high pressure, which produces high temperatures. This causes “heat damage”, ie the creation of unwanted compounds that alter the oil. To obtain an edible oil, these undesirable compounds produced by heat treatment and other impurities present in the seed must be removed. The oil is then further treated, decoloured, deodorized through various chemical and physical treatments to refine it. For more small traces of the extraction solvents and processing will remain as residues in the seed oil.