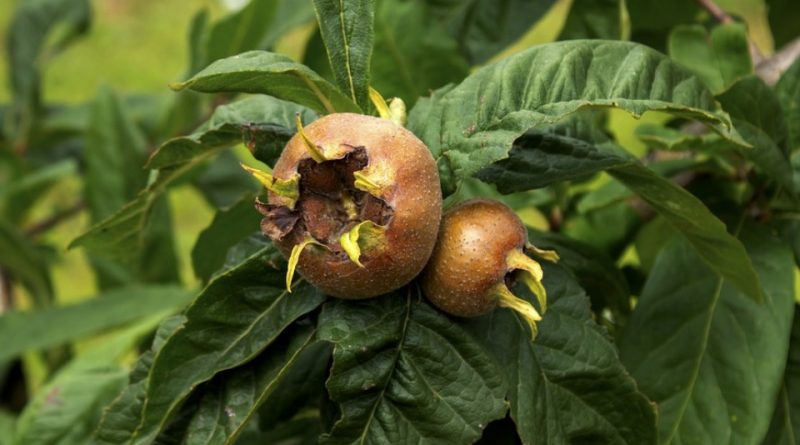 The common medlar, also called the Germanic medlar or European medlar (Mespilus germanica L., 1753) is a fruit tree species of the Rosaceae family.

Systematic –
From the systematic point of view it belongs to the Domain Eukaryota, Kingdom Plantae, Magnoliophyta Division, Magnoliopsida Class, Rosales Order, Family Rosaceae, Subfamily Maloideae and therefore to the Genus Mespilus and to the M. Germanic Species.

Etymology –
The term Mespilus is the classical Latin name of the medlar, derived from the Greek μεσπίλη mespíle to indicate the fruit with a halved spheroidal shape. The specific Germanic epithet refers to Germany: Germanic, German.

Geographic Distribution and Habitat –
In spite of the specific Germanic epithet, the common loquat is originated, according to recent studies, of the Caucasian area, but also with early diffusion nuclei in Iran, in Turkey up to Greece. Today it is a plant widespread throughout Europe as a spontaneous plant in broad-leaved woods or as a rinselvatichita in uncultivated areas. 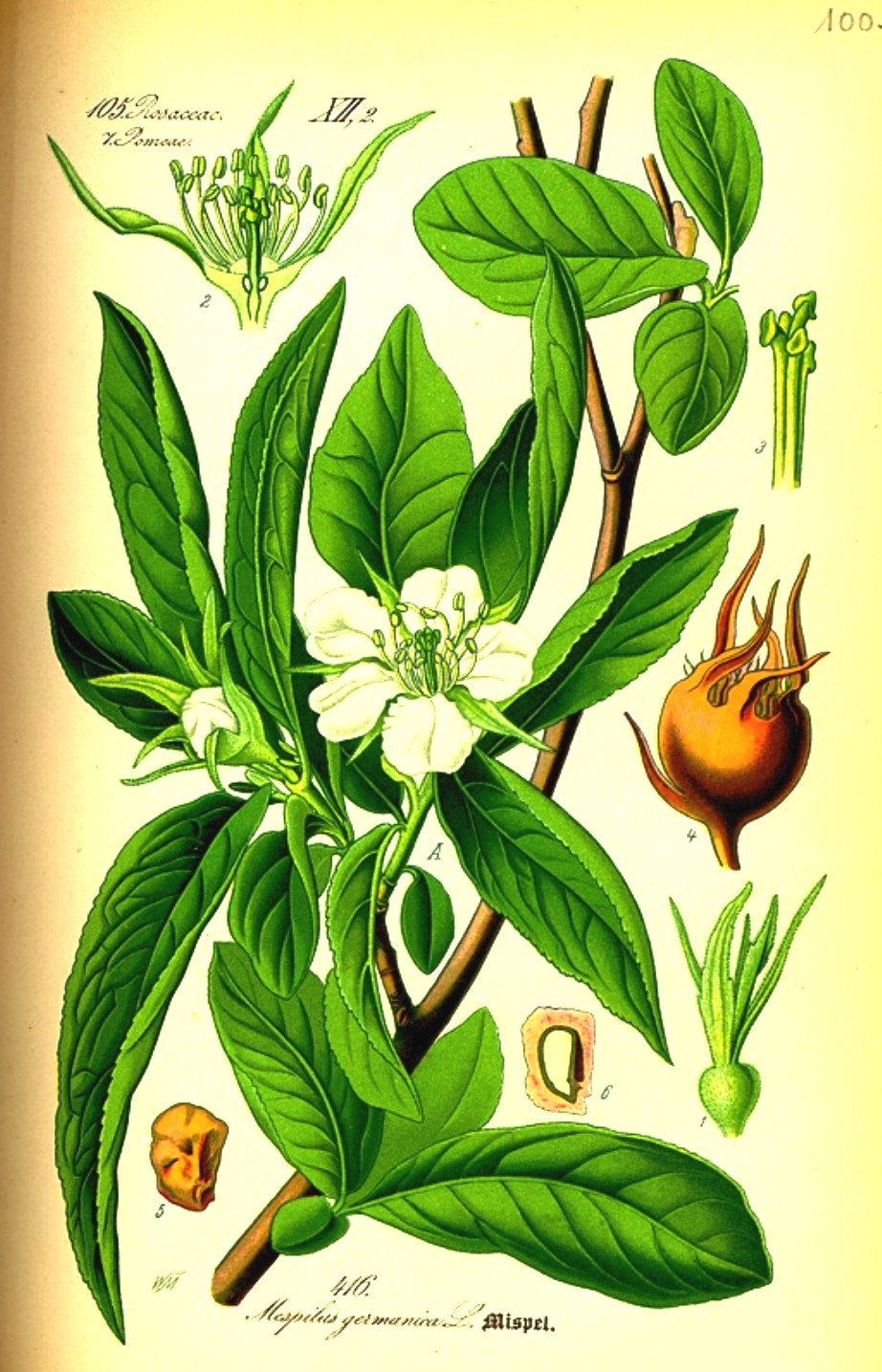 Description –
The Mespilus germanica is a tree of modest size that can reach a maximum of 5 meters in height, but usually presents itself with smaller dimensions. The plant has an irregular bearing, with a certain tendency of the branches to fall in the aged subjects. In wild subjects the young branches can be thorny. The bark of the branches has a color that turns from dark brown to clear and then, as on the trunk, gray. The leaves are large, with full margin and are notched only at the apex; these have an oval shape, with very short petiole, and are more frequent in the distal part of the branches. The leaves when young are opaque due to the presence of a light down that remains only on the lower page, become in autumn a beautiful coppery color.The flowering is in May with the flowers that open at the top of the sprigs; the flowers are large and isolated, white in color with five petals and bear both sexes. The common medlar is a self-fertile plant with a high percentage of fruit set.For the fruit, false fruits are formed due to the enlargement of the receptacle around the real fruit (medlar). These are very recognizable, roundish, with a wide apical depression, crowned by residues of the glass; they have a short peduncle and a resistant peel that is similar to leather for grain, color and consistency. Inside we find five hard and woody seeds.

Cultivation –
Mespilus germanica is a plant very resistant to winter cold, it goes up to a thousand meters of altitude.In the cultivation of this species, plants born from seed grow very slowly and bear fruit in the sixth or seventh year of life. The germination of the seeds is rather low, so it is advisable to use the seeds of loquat which have not been halved, but have matured completely on the branch. With the use of grafted plants, the waiting time for fruiting is considerably reduced. common can be grafted on different plants: pear, hawthorn, rowan, cotogno, azzeruolo. The most rustic and indifferent to the type of soil is the hawthorn, while the quince is afraid of calcareous soils. Pear and mountain ash will give larger plants. The cultivated loquats give fruits of bigger size and lower tannin rate than the spontaneous ones. For details of the cultivation technique refer to the following sheet.

Uses and Traditions –
From its origins that are lost in ancient times in the geographic areas of the Caspian Sea, in Asia Minor and then in Ancient Greece (about the eighth century BC), the common Medlar then spread to Central Europe, that gave it its Latin name of germanico.La its spread was favored by the Romans very much and took so much foot in Germany at the time of Linnaeus to classify it, suspecting its origin in this area, called him because of his Mespilus germanica.Per autumn maturation and vaguely similar fruits, the common medlar was also confused, or simply compared to the plant of the Sorbo. Since the end of the eighteenth century this species was gradually supplanted throughout Europe by the Japanese loquat, which had initially been imported as a simple ornamental plant for the Courts of France. The fruits of the common Medlar are harvested unripe, awaiting maturation, out of the plant. In fact, due to the high content in tannins, the fruits can not be consumed when harvested. They need to be amalgamated, a maturation fermentation obtained by placing the fruits inside wooden boxes, covered with straw and placed in a cool room. The fruits must be consumed as they are ready because the fermentation process does not stop and the fruits can quickly degrade. After the amalgamation the pulp becomes brown, soft, sugary, of a pasty consistency, slightly acidic and pleasant. In addition, the tannins of the bark, the leaves and the immature fruits are tanned. The wood, brownish-yellowish, is very hard and is used for lathe work; it also provides an excellent coal. Moreover, due to its rusticity, Mespilus germanica is used and appreciated as an ornamental plant.

Methods of Preparation –
The fruits of the common Medlar, as mentioned, can be consumed only after the phase of the amalgamation and are consumed mainly as a dessert. From their transformation you can get: jams, jellies, sauces and various culinary preparations. They are also used for the production of alcoholic beverages, such as brandies, liqueurs, schnaps. Immature fruits have also been used to clarify wine and cider.