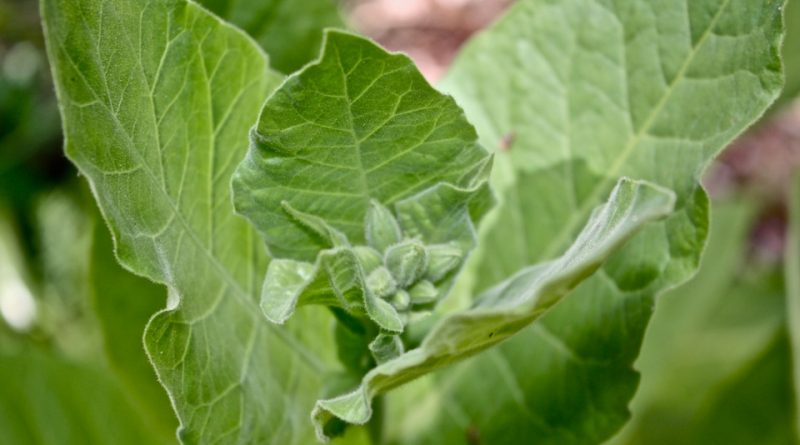 The Tabacco (Nicotiana tabacum L.) is a perennial herb that belongs to the Solanaceae family.

Systematic –
From the systematic point of view it belongs to the Domain Eukaryota, Kingdom Plantae, Subarranean Tracheobionta, Superdivision Spermatophyta, Division Magnoliophyta, Class Magnoliopsida, Sottoclasse Asteridae, Order Solanales, Family Solanaceae and then to the Nicotiana Genus and to the Specie N. tabacum.

Etymology –
The term Nicotiana was dedicated to Jean Nicot, Lord of Villemain (1530-1600), French academic and ambassador to Portugal, who in 1559 sent to the court of Catherine de Medici a specimen of this plant considered a drug. The specific epithet tabacum is the Latinization of the Spanish word tabaco which is believed to derive from the Arawak language and in particular from the Caribbean dialect Taino which (according to Bartolomeo de Las Casas, 1552) referred to this term with a scroll of leaves of the plant; or to the tabago a sort of Y-shaped pipe used to suck the smoke through the nasal passages. Other sources claim that the term tabaco was already used in Spanish to define medicinal herbs as early as 1410 and was an adaptation of the Arabic word tabbaq, which since the ninth century indicated herbs of various kinds. The word could therefore have been originally European and subsequently used for this American plant.

Geographic Distribution and Habitat –
Tobacco is a native species of the tropical and subtropical areas of America. Today it is a plant grown all over the world. Some varieties of this plant are grown as ornamental plants, while others grow like weeds. Its optimal habitat is of little windy areas with temperatures between 20-30 ° C with atmospheric humidity between 80 and 85% and a low level of nitrogen in the soil. 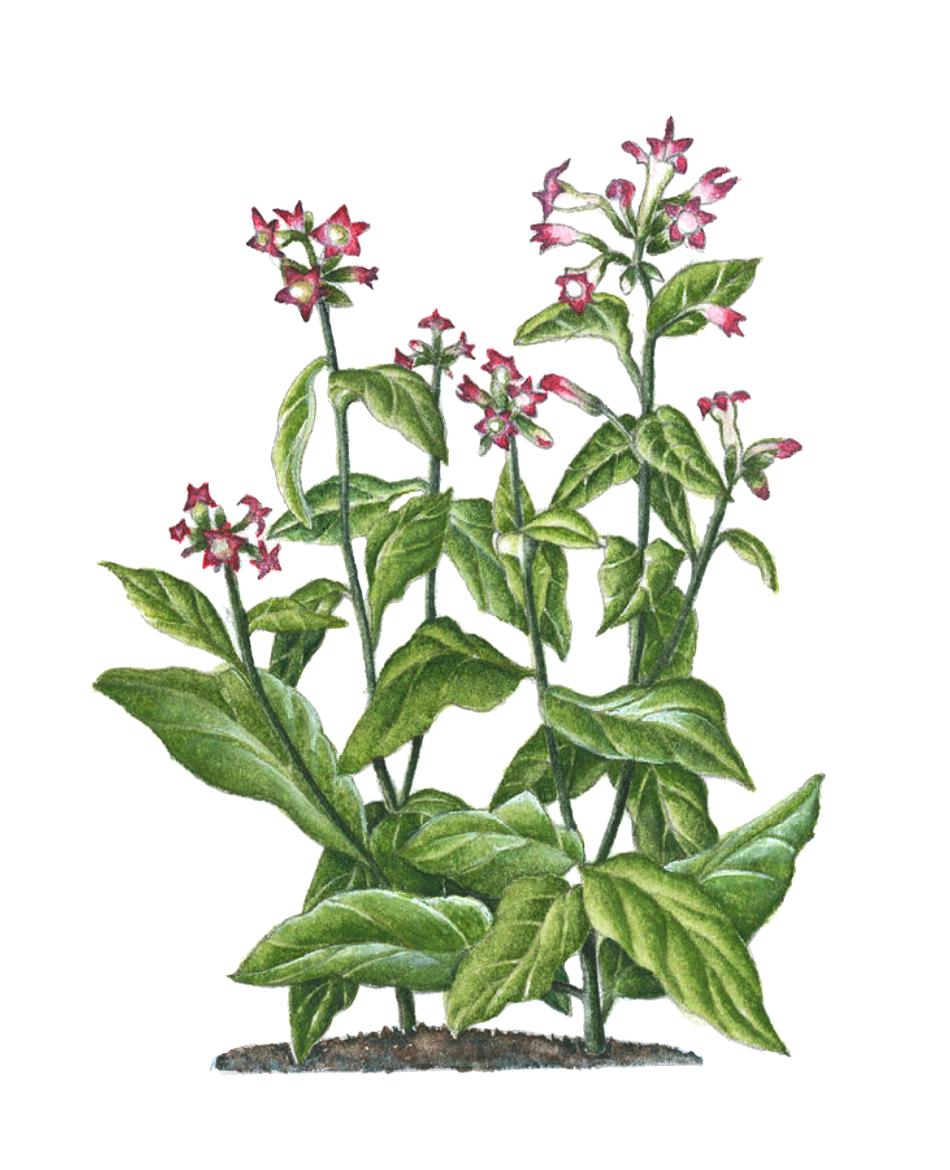 Description –
Nicotiana tabacum is a herbaceous species with a determined development whose tip cauline differentiates leaves up to a certain moment, after which it differs in inflorescence and a height that varies greatly according to the number and the length of the internodes but which generally hovers on 1.5-2 m .. The number of leaves ranges from 25 to 35 and are not very petiolate or sessile, sometimes with appendices almost similar to contract amplessicauli. They have a full margin, ribbed ribs, slightly wavy edge and all over the surface have glandular hairs secreting a viscous liquid. They have an ovate-lanceolate shape, with a maximum length and width ratio ranging from 1.5 to 3.5, but with a variable size depending on the variety, environmental conditions, breeding techniques and position on the stem. The leaves, with the maturation, change color towards the yellowish-green and assume a hanging and then reflected bearing. The stem is robust, erect, not branched, tomentose and viscous for the resinous substances emitted by the glandular hairs. The roots are fictitious and very ramified; during the transplant, however, the taproot breaks and the plant in the open field is anchored to the ground by an extensive system of rather superficial fibrous roots.The Tobacco has large and showy flowers, with a gobletphalope with 5 unequal teeth, pedunculated and reunited in apical inflorescence in pannicolo; the corolla is white in the tube, while it varies from pink to red to yellow to white in the lobes and is longer than the calyx and has 5 lobes. The androceo is composed of 5 stamens. The gynaeceum is composed of a pistil with ovary supero bilocular very rich in ovules, surmounted by a long stylus, with a bilobed stigma.The fertilization is autogamous, but you can have occasional allogamy, due to wind or insects.The fruits are ovate capsules -conics, which start to ripen for 3-4 valves leaving thousands of seeds out. The seeds are very small, reniform, brown and wrinkled-reticulated on the surface.

Cultivation –
The tobacco, even if it is a plant of sub-tropical origin and therefore brevidiurna, with the extension of its cultivation has adapted to the different photoperiodic regime becoming neutrodiurna.For its cultivation it needs temperatures of 15 ° C to germinate and 25 -30 ° C to bloom, so in temperate climates the cycle takes place during the spring-summer period. It is a plant that adapts considerably to different environments, from the equatorial to the continental, thanks to its great genetics and the variability of the product types. Also in terms of pedological needs it adapts in soils with different pH, texture, nutrient richness but it shuns those rich in salts, especially chlorides. For details of the technique of cultivation of the various types of tobacco please refer to the following sheet.

Uses and Traditions –
The name tobacco, which is also used for the product obtained by drying the leaves of this plant, is a species that is only found in cultivation, and is the most commonly cultivated among all members of the Nicotiana genus, mainly to obtain material for cigarettes and cigars.In his first trip to the New World, Christopher Columbus met the plant with the natives of the island of Hispaniola.Following, in 1560, Jean Nicot de Villemain brought tobacco seeds and leaves of the plant, described as a “miracle drug” at the French court. In 1586 the botanist Jaques Dalechamps gave the plant the name of Nicotiana Herba, a name also adopted by Linné. Initially, the Nicotiana was considered a decorative plant, then a panacea, before becoming the plant that produces smoking tobacco. In 1851, the Belgian chemist Jean Stas was the first to demonstrate the use of tobacco as a poison, extracted from the civilized world. The Belgian count Hippolyte Visart de Bocarmé had poisoned his half-brother with tobacco leaf extract in order to acquire his goods urgently; it can be said that this was the first exact proof of the presence of alkaloids in forensic medicine.

Preparation Mode –
For the preparation of tobacco, the leaves should be harvested when the flower appears at the tip of the plant, which should be cut as being the flower where the seed is produced if it is left on the plant, it could stop its growth. Normally after four months of growth the plant should be ready. At this point you can cut the leaves, hanging them upside down in the traditional way and let them dry in the sun. You have to leave them hanging for a couple of months, until they become golden brown. The leaves should be selected at will when they are detached from the plants. In general the leaves at the top should be sweeter and the lower ones should be stronger, so it will be personal taste to dictate the choice. Once harvested, the dried leaves can be put into a chopper and in this way you will get of tobacco flakes. Obviously, aroma, intensity and every characteristic is a function of the cultivation methods, of the variety, of the climate, of the type of soil and of many variables. In any case the tobacco can be kept in jars and it is good that the leaves of a plant tobacco fill the container in half.