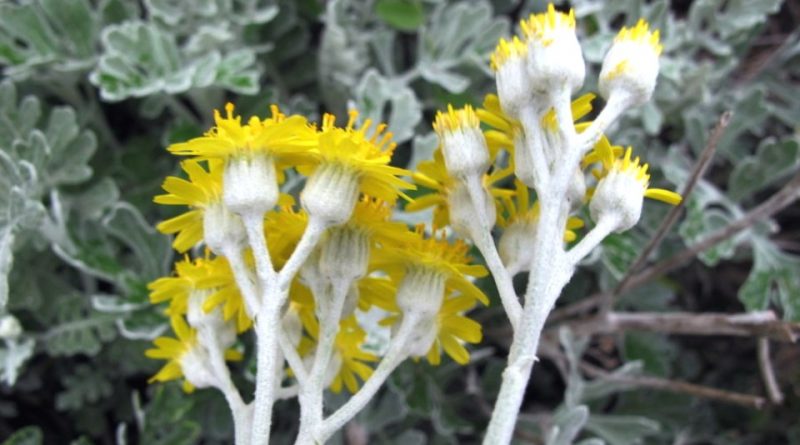 The Cineraria or Senecione coastal cinerario (Jacobaea maritima (L.) Pelser & Meijden, 2005) is a herbaceous species belonging to the Asteraceae family.

Geographic Distribution and Habitat –
Cineraria is a species widespread throughout Southern Europe, in North Africa and in Turkey, in correspondence with the olive tree and is naturalized in North America. In Italy it is found in the Tyrrhenian coastal areas and on the major islands. Its habitat is that of the rocky ridges near the sea and is also easily found on stony and low walls and sometimes even far from the sea between 0 and 300 meters. 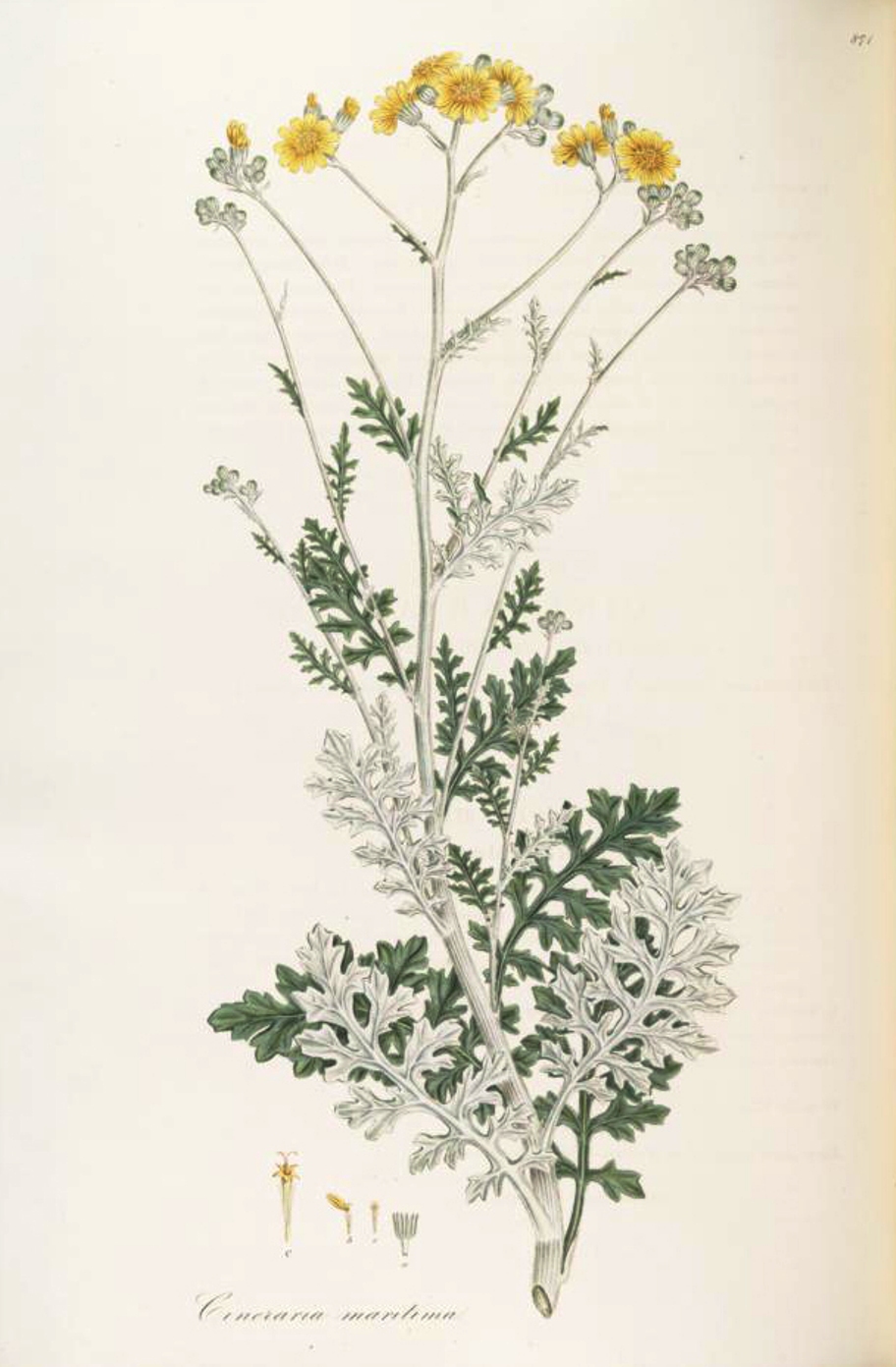 Description –
Jacobaea maritima is a suffruticose, evergreen herbaceous species, 30 to 100 cm tall, with erect, robust, white-tomentose, ramose stems. The leaves are pennatosette with lamina divided into thin segments (linear or lanceolate), spaced from each other and with an undivided central part a few mm wide; these are slightly fleshy, of white-tomentose color below and cenerine above; the lower ones have a triangular outline with 4-5 pairs of lateral or lanceolate lateral lacinias and lobed apical segment or party; the upper leaves are similar, but lesser.The flowers are bright yellow, collected in rich, relatively small corymbs, often accompanied by shorter lateral branches; they are characterized by flower heads with central tubular flowers and peripheral ligulate flowers radiant in a single series, all hermaphroditic, with a total diameter of 12 mm, initially conical-hemispheric, then cylindrical with a diameter of 5-6 mm; scales of the tomentose and whitish wrap, the internal ones (13) of 7 mm, the external ones (1-3) null or minutissime.I fruits are striated achenes, minutely pubescent or glabrous, with pappus of white bristles, caduche.L ‘ antesi is in the period between May and August.

Cultivation –
The Cineraria is a plant that needs exposure in full sun, prefers well drained, sandy or predominantly skeleton (stony) soils. The plant tolerates drought and salinity, both of the soil and of marine aerosol. Of this species there are many cultivars used for ornamental purposes, they are selected according to the color and size of leaves and flowers. In harsh climates it can be grown as an annual plant, renewing the crop with sowing or performing herbaceous cuttings. For details of the cultivation technique refer to the following sheet.

Uses and Traditions –
The cineraria, as mentioned, is a small shrub that is widespread, spontaneously, along the coasts of the Mediterranean, which is divided into several taxonomically distinct entities. It is often used as an ornamental plant due to the splendid blooms, the foliage with Argentinian nuances and because it is frugal and resistant. The plant contains senecionina, a highly toxic alkaloid. Jacobusea maritima was attributed, especially in the past, marked decongestant and anti-inflammatory properties; actually it is effective to cure inflammation of the eyes, but given the sensitivity and sensitivity of these parts, it should be used with extreme caution and on medical prescription, in order to avoid any risk and inconvenience. Currently the use is strongly discouraged, precisely because it contains, like all species of the genus, the senecionina.

Preparation Mode –
Although effective as a decongestant and anti-inflammatory, the home preparations are not recommended due to the presence of senecionina, which is a highly toxic alkaloid. The only most practical use is that of a covering species in arid gardens, in flowerbeds, on borders and on walls and rocks, either alone or in combination with herbaceous plants that bloom in bright colors.