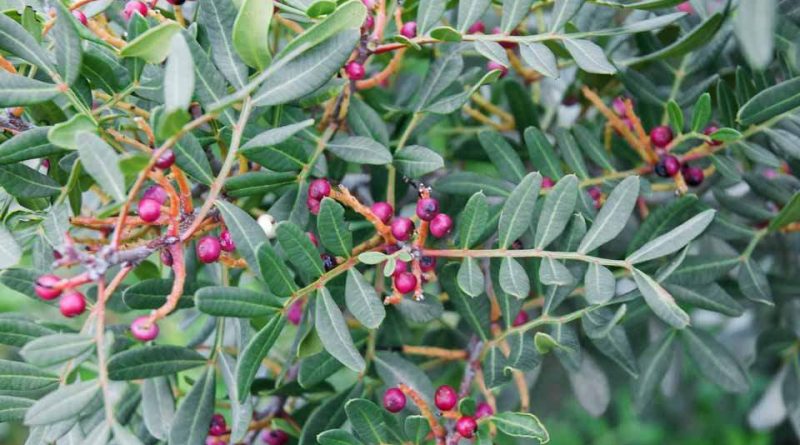 Systematic –
From the systematic point of view it belongs to the Eukaryota Domain, Kingdom Plantae, Magnoliophyta Division, Magnoliopsida Class, Subclass Rosidae, Order Sapindales, Family Anacardiaceae and therefore to the Genus Pistacia and to the Specie P. terebinthus.

Etymology –
The term Pistacia comes from the Greek πιστάκη pistáke pistachio, assonant with the Persian pistáh rich in flour. The specific epithet terebinthus derives from the Greek τερέβινθος terébinthos terebinto, a plant cited by Theophrastus.

Geographic Distribution and Habitat –
Terebinth is a plant native to the island of Chios, a Greek island in the eastern Aegean, from where it has spread, for several millennia, on all the shores of the Mediterranean, including the countries of North Africa and the Middle East, reaching on the western borders of India. In Palestine a native variety grows, born from a spontaneous hybrid with lentisk. In Italy it is found in all the regions of the Mediterranean and submontane plain, including the islands while it is rare in the north. It is mainly found on the coasts, it grows on the slopes and in the cracks of calcareous and arid rocks, along the dry and sunny slopes, up to 900 – 1000 meters above sea level, inside thermophilous woods. 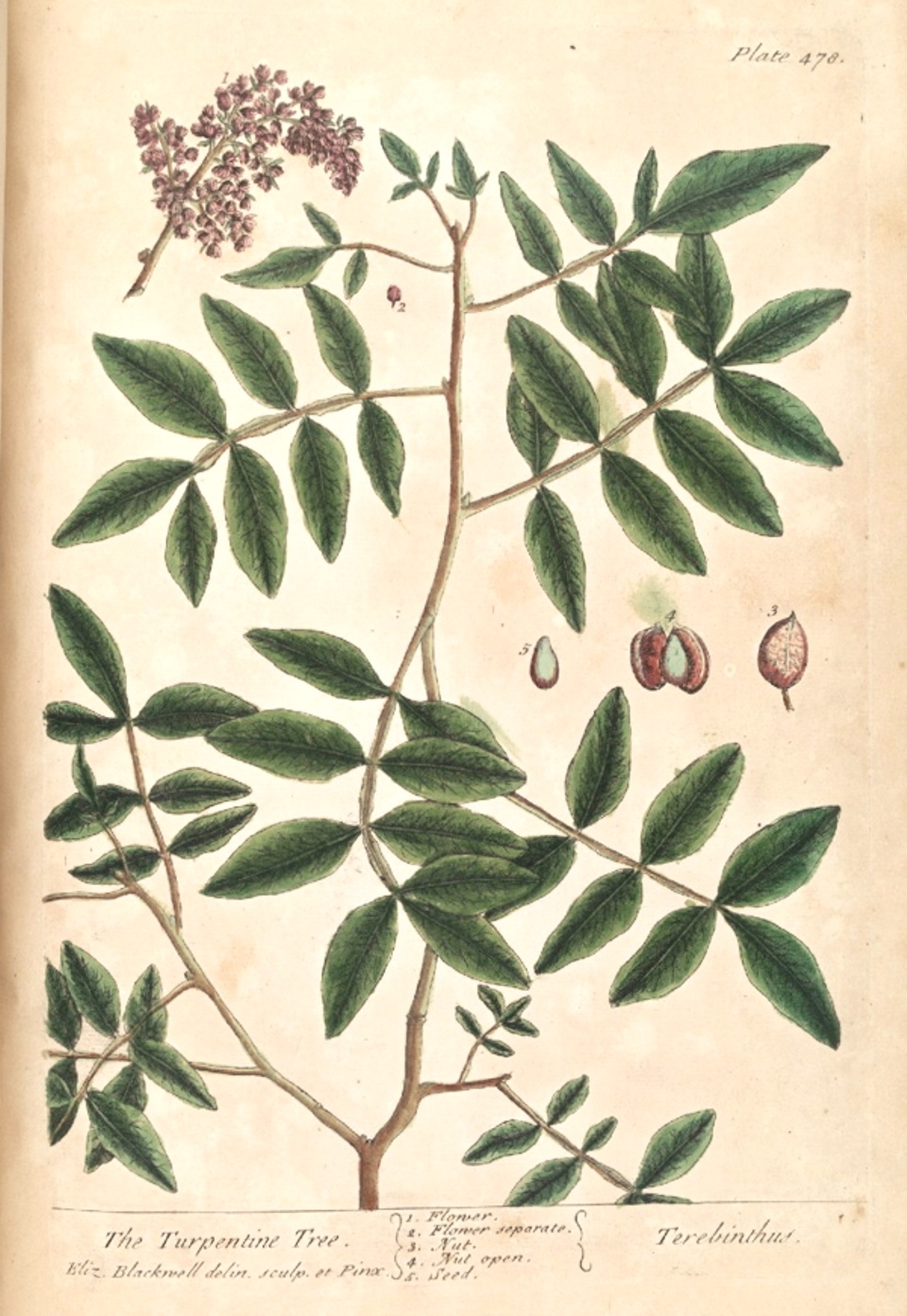 Description –
Pistacia terebinthus is a plant with shrub or small tree, with dimensions ranging from 1 to 5 m in height. It is a dioecious species, rich in fragrant resin, with young branches with reddish bark which over time becomes brown in color and tends to crack. The leaves are coriaceous, deciduous, imparipinnate, with 5-11 elliptical or lanceolate segments, of a glossy green color above, light green below. The flowers are brown-purple, gathered in panicles. The fruit is an ovoid drupe of 6-7 mm, first of a greenish color and then, when ripe, dark red. The flowering period is between April and June.

Cultivation –
Terebinth is a species used above all as a port-grafts for the cultivation of pistachio, forming natural, dried-up pistachios, especially in Sicily. It is a plant that loves sunny areas, preferably with exposure to the south, where it grows well even in calcareous soils on condition that they are not excessively clayey and in good drainage condition. It is a very rustic plant with few water needs. This plant, as well as rootstock, is also cultivated for ornamental purposes for hedges and gardens, thanks to the voluminous colored fruiting. Observed as an element of the landscape, the terebinth for many months a year enriches the landscape with its shining branches, enhanced by intense pink berries that remain on the branches for a long time.

Uses and Traditions –
The Terebinth was known both the Egyptians and the Greeks who obtained a resin obtained from the bark called Trementina di Chio. From the end of July until the end of September, in the Greek island of Chios, cuts were made in the trunks of the old terebinths to collect this resin considered until 1770 a good natural balsam. It has always been one of the rarest and most sought after resins especially against calculosis. The wood of Pistacia terebinthus is used in cabinet making and for inlay work. The wood is brown, veined, heavy, compact and homogeneous and, above all a time, was used for turning jobs because it lends itself to being smoothed. In the past the bunches of the berries, preserved in vinegar like capers or in salt as the olives were considered the food of the poor and also had the reputation of being aphrodisiacs. They are used to flavor meat, to prepare special types of bread, to prepare a Cretan liqueur called tsikoudia.These berries, in Turkey, are roasted to prepare a drink similar to coffee, while the essential oil is used in the factory of soaps and of beauty products. From the galls, caused by the aphids Pemphigus cornicularius and P. semilunarius, tannins are obtained that were used in the past to tan the skins. Even in Spain, in the past, galls were used to produce an astringent wine used to give vigor to the gums. Today, recent research has allowed us to extract from these galls a triterpene with anti-inflammatory action.

Preparation Mode –
Terebinth as well as for its uses as rootstock and as an ornamental plant was used, above all in the past, for some alimentary purposes. The berries, as mentioned, were preserved in pickles or sottosale and used to flavor various dishes. In some countries, such as Crete or Turkey, liquors or drinks are obtained. Interesting is the use of the essential oil to be used in the preparation of soaps or for cosmetic products.