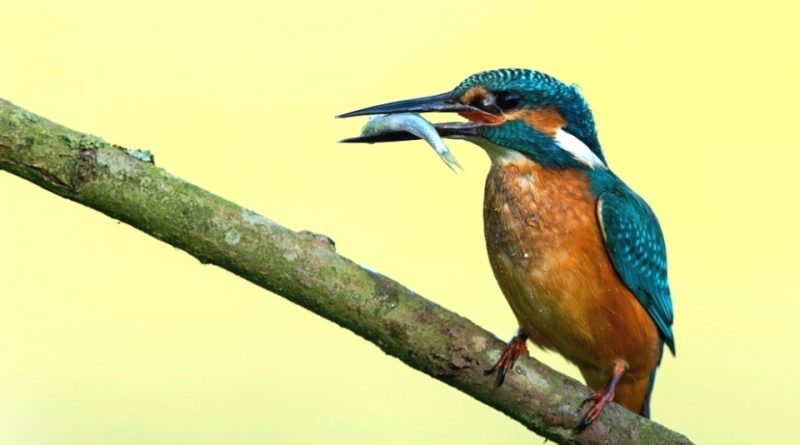 The Common Kingfisher or European Kingfisher, also called alcione, (Alcedo atthis L.) is a bird of the Alcedinidae family.

Geographic Distribution and Habitat –
The Alcedo atthis is a bird that lives in a vast area ranging from most of Eurasia, North Africa and the western portion of Oceania. However, the species is sedentary only in the vast majority of its European range, in the Indian subcontinent, in Japan, Indochina and Melanesia. In other areas, in the areas north of this range the species is present only in the summer for nesting, after which, with the arrival of the cold tends to migrate to the south. In other areas such as Southeast Asia, Indonesia, Philippines , Middle East, and much of North Africa, these birds winter and then leave again north in the spring. The habitat of the Kingfisher is that of the rivers and streams in slow course, even if it adapts on the banks of lakes, mangroves, reeds, estuaries, inlets and even marinas (frequented especially in winter, when the waterways where this animal usually lives can be depopulated or even freeze), marshes and artificial reservoirs. 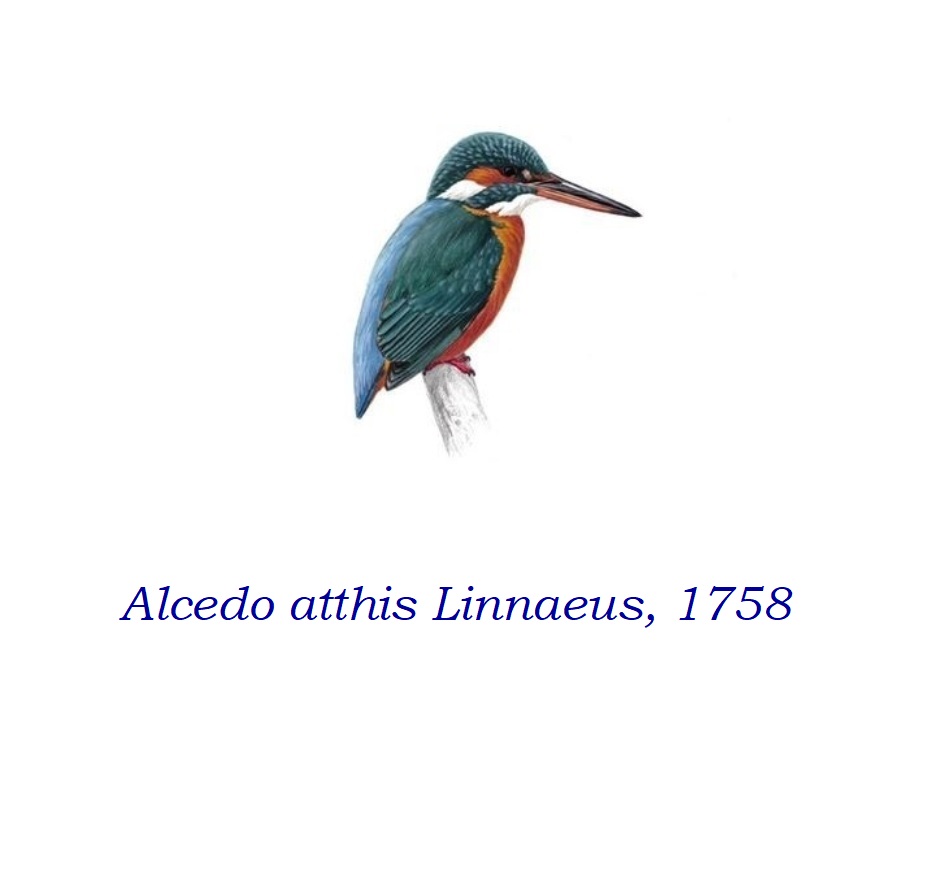 Description –
The Kingfisher is recognized for the bright colors of its livery, between blue and emerald green. The distinctive characters that make this bird unmistakable are essentially two. First of all, the plumage, brilliant, nuanced by turquoise and emerald green on the back, while the chest appears bright orange. Hence his eating habits: it is not uncommon to observe him immobile for hours, perched near the water, where he usually dives as soon as he finds a potential prey. Alcedo atthis is a bird between 17 and 25 cm long, with a wingspan that can reach 26 cm and a weight ranging from 26 to 46 g; despite its small size, it can swallow relatively large prey for its size, even at the same or larger size, and then “finish” it by pecking it insistently on a stone placed near the water. In Italy, the species is of stationary habits, but the migrant and wintering contingent is also conspicuous. By occupying such a large area and a large number of different habitats, the kingfisher has a very marked local variability, which has led to the identification of at least 7 subspecies, distinguishable from one another mainly on the basis of the color of the blue of the back and the orange on the belly, but also for other parameters such as the dimensions and proportions of the beak with respect to the head and the body. The subspecies are: Alcedo atthis atthis, Alcedo atthis bengalensis, Alcedo atthis floresiana, Alcedo atthis hispidoides, Alcedo atthis ispida, Alcedo atthis solomonensis and Alcedo atthis taprobana. These subspecies are distinguished not only for some morphological aspects even for the areas where they live, winter and reproduce.

Biology –
The Kingfisher lives and nests in northwestern Africa, southern and eastern Spain and Corsica. You can often see it perched on a branch near the water, where – as it is easy to guess from the name it bears – it dives skillfully in a dive as soon as the prey is detected. As said, it is able to swallow relatively large prey for its size, it can be observed motionless, for hours, with the look turned to the water, waiting for the passage of some fish.L ‘Alcedo atthis is a volatile diurnal and lonely, who spends most of his life looking for food: in fact, it daily requires a quantity of nourishment equal to about 60% of one’s body weight. During the night he takes refuge in the dense vegetation near one of the favorite viewing points. Its flight is generally low, close to the water, very fast and short: especially when food is scarce, it can be observed doing the “holy spirit” on the water, in order to observe and evaluate the presence of any prey on the bottom.The area of ​​their relevance generally is between 1 and 3.5 square kilometers: strenuously defends its territory from any intruder, even with its own affinities, which may be its partner (other than the breeding season ) or his own progeny. It is a very silent but not silent bird: the kingfisher can emit a short and acute whistle (often repeated two or three times), as well as excited or nervous specimens can emit croaking sounds. During the breeding season the Kingfisher abandons at least temporarily his territorial and solitary customs. Couples are formed as early as autumn, but the two partners keep their territories rigidly separate until the spring: in the first stage of courtship, the male chases the female continuously emitting short trills. The courtship continues with offers of food by the male and eventually culminates in the actual copula, before which male and female lightly tap their beak. The couples are strictly monogamous for the duration of the reproductive period: however, they are not stable and each specimen seeks a new companion every year.The nest consists of a straight and slightly declining tunnel dug by both partners in the steep terrain of the banks The nest can be dug into various types of soil (sandy, pebbly, earthy, even in the splits or between the concrete blocks of the artificial banks) and can be placed at a height from the water that goes from half a meter to 37 meters Inside the nest the female lays a number of eggs ranging from two to 10; these are white, glossy, about 2.2 cm long, 1.9 cm in diameter and have a weight that is around 4.5 gI parents take turns in the brooding during the day, while during the night it is the only female to perform this task.The hatching takes place after about three weeks and generally, one or more eggs do not hatch, since the parent is not able to cover the whole brood during incubation.The little ones are fed by both parents, who alternate in the search for food that consist of small fish that are given whole to small.After less than 4 weeks the young are able to take flight and get food on their own, even if they often stay longer with parents. The broods can be two during the year; one in April and the other in July: in years with a particularly mild climate, however, it is not rare to observe a third brood in early October. The kingfisher is a rather long-lived bird; can live up to 21 years but, on average, do not live more than 7 years.

Ecological role –
The Alcedo atthis, as mentioned, lives mainly in the bodies of water but these, in order to accommodate nearby the Martin fishermen, must have clear water (essential to identify the prey, since the kingfisher feeds on aquatic animals that hunting using mainly the view) and abundant coastal vegetation, possibly with branches protruding on the surface of the water to be elected to observation points. The presence of the Kingfisher in fact near the bodies of water is an index of quality of the habitat In any case, the Kingfisher can tolerate even a certain urbanization, provided it does not affect the clarity of the water. Unfortunately, the construction of artificial cement side banks has a negative effect on the presence of these animals, which need earthy banks to dig their nest and are therefore forced to migrate during the breeding season in areas where they are not present. For this reason where lateral works have been carried out on rivers and streams has negatively affected the presence of this species. Another critical factor is that of pollution that has both impoverished and chemically altered its diet, consisting almost exclusively of fish.In general, this bird is resident in areas where the climate is mild during the cold season, while migrating towards the coastal areas or to the south in areas where the surface of the water remains frozen for long periods during the winter. Migrations are usually modest, although Siberian kingfisherers travel more than 3,000 km to reach wintering sites: some European specimens may also cross the Mediterranean and winter in North Africa or the Middle East, as well as small populations of Bengalese kingfishers and Indochinese these birds can reach Indonesia. Migration occurs mainly during the night, while during the day these animals rest and relax hidden in the vegetation.