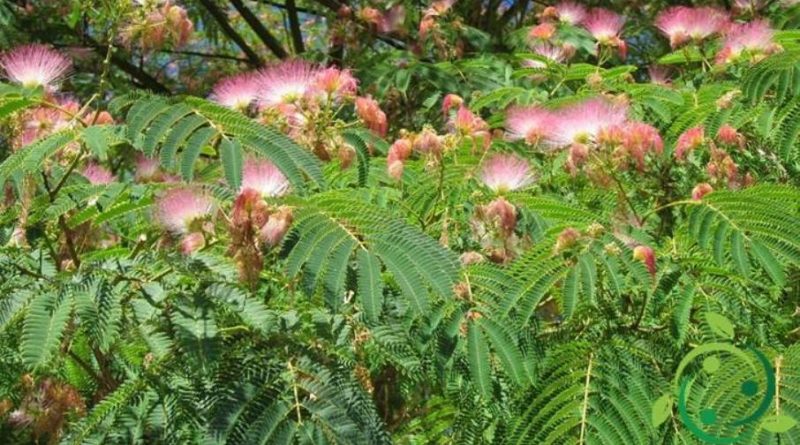 How to cultivate the Albizia

The Albizia or Falsa acacia or Mimosa di Costantinopoli or Gaggìa arborea (Albizia julibrissin Durazz., 1772) is an arboreal species of the Fabaceae family, originating from the eastern and south-western regions of Asia between eastern Iran, China and Korea.
In this sheet we will see how to cultivate the Albizia and in which context to insert it. In fact, the foliage of the adult trees provides a pleasant shaded area. The flowers of this variety range from white to red, but there are also cream-colored and straw-yellow varieties.
Albizia is cultivated as an ornamental shrub in parks and gardens, known for the silky appearance of its holes and the horizontal umbrella that develops. It is a fast growing plant with a low water requirement that allows you to place the plant even in places characterized by very hot summers. In very hot climates it is advisable to place the Albizia specimens in semi-shaded areas, especially during the hottest hours of the day; in the coldest climates, with frosts even towards the end of winter, it is advisable to place the Albizia in an area slightly protected from the cold wind.
The Albizia requires bright areas, with at least a few hours of direct sunlight every day and withstand very well the frost, up to about -25 ° C, but also the drought, the wind, the pollution, the saltiness; in many Italian cities they are used in urban furniture.
The trees already adults are self-sufficient, do not need any care, as they are satisfied with the water of precipitation, and form a well-balanced and tidy foliage, which does not require training. As for the young plants, however, they need summer watering, certainly at the time of planting, but also later in case of prolonged drought.

As far as positioning is concerned, it is good to know that it produces a very broad crown, so when the plant is in place, it is good to position the tree where it can easily develop its foliage, then at least a few meters away from other trees or buildings. The plant can be grown, especially in cold areas, in very large pots and kept even in an apartment in a very bright area.
For the cultivation of this plant, it should be remembered that, being a legume, it does not need nitrogen fertilization due to the nitrogen fixing bacteria present in the roots. In any case, at the end of winter, it is used to fertilize the plants in bloom, burying around the stem small amounts of mature manure. Also during the end of winter it is advisable to remove the finest branches from the younger specimens, or damaged by bad weather.
For the Albizia plant you can choose both autumn and spring; in harsh climates, however, it is preferable to do the plant in spring to avoid winter frosts. The soil where to implant it must be draining. Before implantation it is sufficient to put in the hole 3-5 kg ​​of mature manure or other well humified organic substance. The hole should be about 60 cm in diameter and depth.
In colder climates, in the first phase of growth, up to two years, it is good in the winter to make a mulch around the base of the plant to protect it from frosts.
In very hot climates, however, always in the early years, it is advisable to protect the top to prevent the young shoots from being burned by the sun.
As for pruning, these are necessary during the training period, which takes place at the beginning of spring, while they will become increasingly rare in the adult tree.
For the pruning of the plant, choose the stem more straight and more robust; moreover, do not forget to provide the plant with two rather solid guardians to encourage the development of an erect stem, and to prevent the plant from being damaged by the wind. At this point remove the other weaker stems and lateral branches; let the stem grow and, when it has reached the height you consider suitable, cut the top and leave the lateral branches that will develop spontaneously. If you want to favor the formation of a hemispherical crown, you must eliminate the branches with vertical growth and the branches that cross or overlap; in this way there will be a progressive umbrella formation of the foliage.
The important thing is that the pruning is never drastic but gradual every year since the Albizia julibrissin is a species that bears badly the excessive cuts; moreover, the interventions should be done during the summer to facilitate the healing of cuts.
As for irrigation, the plant should be watered, especially in the early years, in the summer, then the roots of the plant become deep enough to go to find water alone. In a vase obviously irrigation should be carried out when the substratum in the first centimeters is dried.
Let’s see now the reproduction: the Albizia can be reproduced by sowing, by rooted sucker and by cuttings, but in this last case the chances of success are limited. Sowing usually occurs spontaneously, and in this case the albizia, in particularly fertile soils, can become even infesting.
If you already cultivate the albizia and intend to get young plants from the seeds, recover the seeds at the end of autumn when they are dried, but before they are dispersed due to the opening of the pods. The seeds must be stored in the dark, in a cool and dry place. To carry out the sowing it will be necessary to wait the following year, in late spring, when the temperature will have reached at least 20-25 ° C. To facilitate reproduction, before sowing, leave the seeds in the water for a few days.
Reproduction by cuttings is done in the summer using semi-woody twigs, even if it is a more delicate technique and for the more experienced.