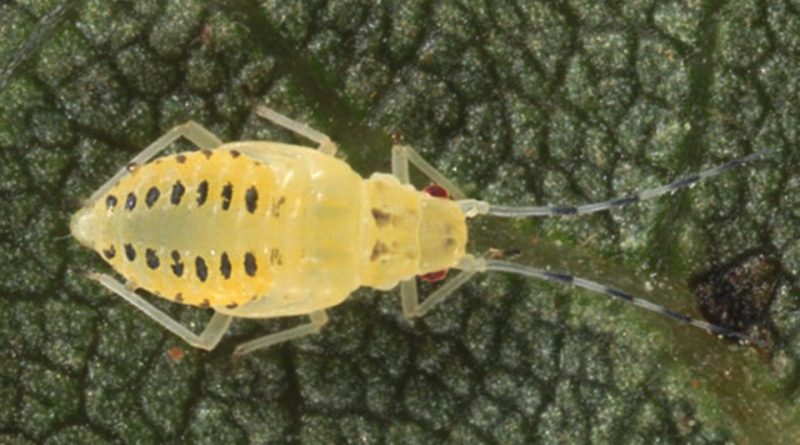 The green Aphid of the lime tree or Linden aphid (Eucallipterus tiliae L.) is a Rincote omopter insect of the Aphididae family.

Geographic Distribution and Habitat –
The Lime-tree aphid is an insect native to Eurasia; in recent times, however, it has become widespread and now it is found all over the world where species of the genus Tilia are cultivated.

Morphology –
The Eucallipterus tiliae stands out because the adults are typical yellowish or yellowish-green aphids, with a characteristic double row of blackish points, placed longitudinally on the back. The nymphs instead have a lighter color. The virginoparous forms, which are founders and founders of parthenogenetic nature, have an oval body with a variable color ranging from yellow to greenish-yellow, and a length between 2.4 and 2.6 mm. The winged virginoparas, parthenogenetic foundatrigenies, are light yellow with large black spots, spotted brown wings and body length ranging between 1.8 and 3 mm. The anfigonici, female females, are of variable color from yellow to orange-yellow, with a length of 1.8 mm. The winged males have a color similar to the previous and body dimensions (1.72 mm long) lower than those of the wings. The latter are suffused with gray.

Attitude and biological cycle –
The Eucallipterus tiliae is a frequent aphid on the lime tree where it lives in colonies, especially on the lower page of the leaves; does not cause the classic leaf curl, but produces a large amount of honeydew that smears the vegetation and drips to the ground. The honeydew suffocates the leaves that often fall defoliating the plant; the suffocation is accentuated by the presence of the smokes that also determine a bad aesthetic appearance. In addition, the leaves scattered with honeydew necrotize due to the “burns” due to the slow effect that the honeydew causes with the sun’s rays. Add to this, for the plants located in the urban furnishings, that the honeydew involves many problems, in the avenues and in parking lots and parks, for the continuous “rain” sticky that disturbs the use of these structures, during the period of ‘infestation.
The Eucallipterus tiliae is a monoic aphis that carries out the biological cycle on the Linden, as the sole guest; the insect winters as an egg, at the base or near the host plants. The oviposition can occur near the buds or at the collar of the plant, in the soil at the root level and within the cracks of the bark.
The nymphs of the foundresses open up towards the middle of April and become adults in about 15 days, after which they are transferred to the lower page of the leaves. Here during the spring and summer there are 5 or 6 generations of fondatrigenie, usually winged, which generate the sessupare, from which, in October-November, the anfigonici originate, whose inseminated females lay their hibernating eggs.
The Eucallipterus tiliae performs several generations a year (from 8 to 9), with overlapping of the various stages.

Ecological role –
The period of greatest harm is connected to the maximum density of the colonies, which is recorded from June july until September.
The plants that are part of the urban design can be treated with specific aficits within the first ten days of May or, even if it is advisable, always in the same period, to intervene with the distribution of water added to bathers to avoid drift on people of the insecticide . Although all the precautions are taken, the insecticide has an ecological impact, on the entomofauna useful and, as an effect it derives on people and on the city environment or on the ground and on the groundwater. The chemical products to be used, if the treatment is appropriate and technically possible (as in nurseries), must be chosen among the most selective and specific for Aphids, in order to determine the least possible damage to the useful biocenosis. In any case the treatment must be carried out far from the blooming of the Linden tree, anticipating or delaying it, to avoid damage to the pollinators or to the numerous entomophages present.
The products to be used are based on Pyrethroids; they are very active towards the Aphid, however their use must be done with caution during the periods of activity of the auxiliaries because they are not very selective, especially when compared to useful insects; in particular the indiscriminate and untargeted use of Pyrethroids involves:
– a reduction of the populations of Coccinellids, of the Sirfidi and of the Hymenoptera, predators / parasites of the Aphid and other phytophages;
– an increase in the population of the Ragnetto del Tiglio (Eotetranychus tiliarius), due to the slaughter of the population of its most important controller, the Stethorus punctillum (Predatory Coleoptera);
to avoid therefore indiscriminate and often more damaging interventions of the remedy, a visual sampling of the infested vegetation is opportune and a sampling also of the presence of the natural enemies of the Aphid; very often their presence is sufficient to control the population of the plant, without any specific chemical intervention. Among the natural enemies it is appropriate to remember:
– the predatory Coccinellidae: Adalia bipunctata, Coccinella septempunctata, Harmonia conglobata;
– the Dithteri Sirfidi: Syrphus ribesii, Scaeva pyrastri, Episyrphus balteatus, whose larvae are active predators of Aphids;
– the Diptera Cecidomidi, the Chrysopa carnea, the Rincoti Antocoridi (Gen. Anthocoris), the Parasitoid Afididae Hymenoptera.