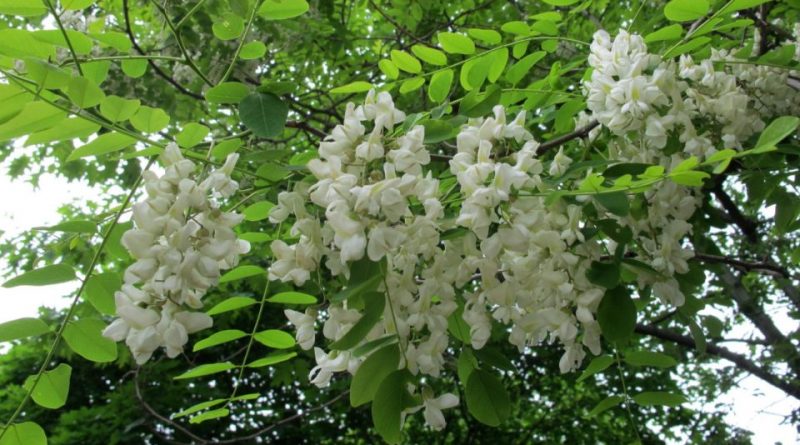 The Robinia, also called acacia (Robinia pseudoacacia L.) is an arboreal species of the Fabaceae family.

Etymology –
The term of the genus Robinia was dedicated by Linnaeus to the French botanists Jean Robin (1550-1629) and his son Vespasian (1579-1662), gardeners and herbalists at the French royal court who introduced the Robinia pseudoacacia in Europe. The specific epithet pseudoacacia comes from the Greek prefix ψευδο- pseudo-pseudo, fallacious, liar and from the genus Acacia, which in turn derives from the Greek name ακακια acacía (doubling of ακέ ακις acé acís needle, tip, thorn) with which Theophrastus and Dioscorides indicated a species of Egyptian Acacia; therefore false acacia.

Geographic Distribution and Habitat –
The Robinia pseudoacacia is a plant native to the central-eastern United States (region of the Allegheny Mountains), where its characteristic habitat is that of the mixed deciduous mesophilous woods. The species was introduced in Europe in the seventeenth century where it gave rise to different ecotypes able to colonize from the cool-humid environments of oceanic climate to the hot-arid ones of Mediterranean climate. In Italy it is present from the sea level up to about 1000 m in the north and up to 1600 m in the south. 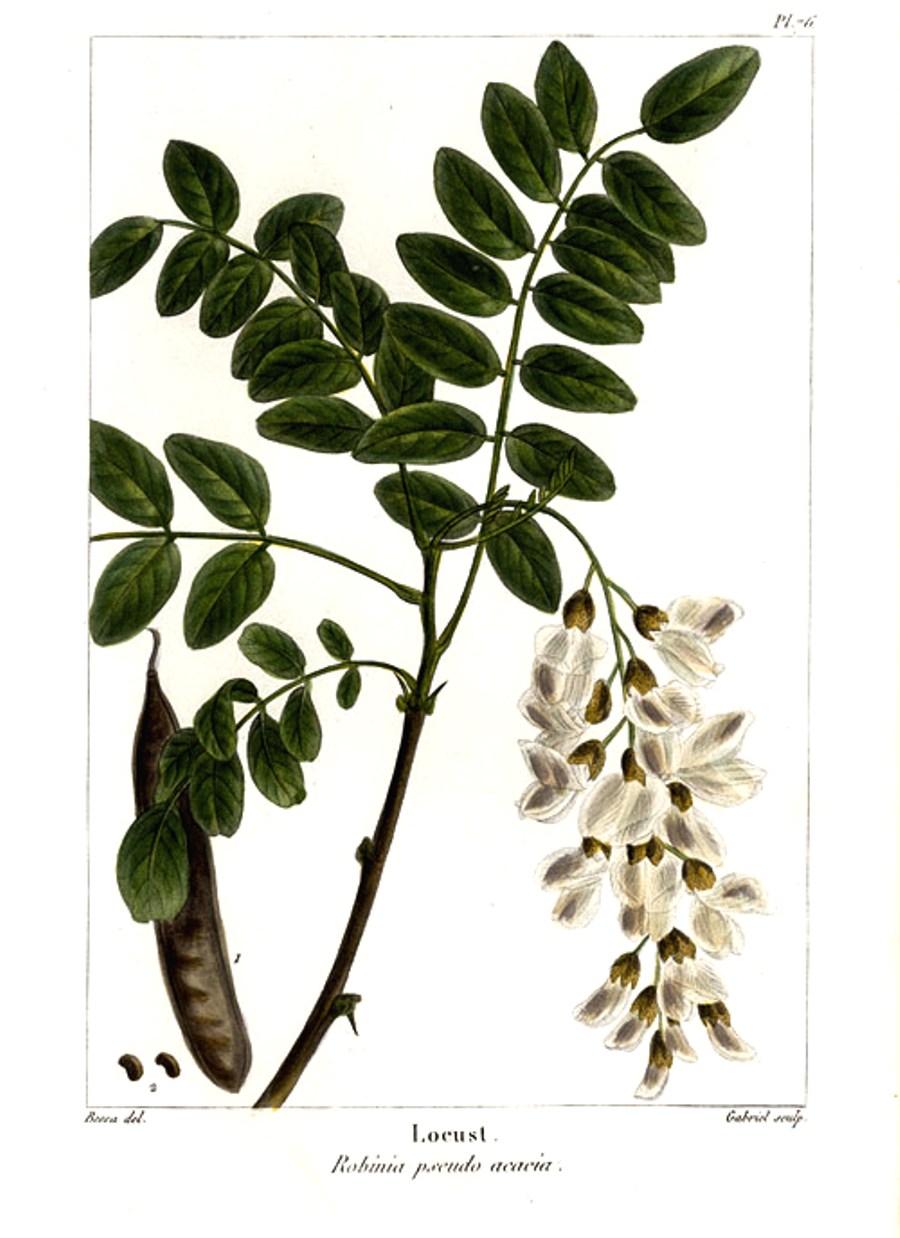 Description –
The Robinia pseudoacacia is a tree that can reach 25 m in height, with slender and heterogeneous, often irregular, opaque green color. It has a cylindrical stem, straight, with thick grayish rind engraved by deep and vertical furrows, which in the upper part of the same and branches are provided with sturdy thorns similar to those of roses. The leaves are deciduous, alternate, up to 30 cm long, composed, imparipinnate, formed by 13-15 elliptic segments, rounded at the apex, up to 4 cm long, a little lighter underneath.
The plant blooms in the May period with white and very fragrant flowers; these are numerous, gathered in pendulous racemes up to 25 cm long. The fruit is a typical legume, blackish, flattened, 5-10 cm long, persistent on the tree until late winter, with small dark brown seeds.

Cultivation –
The Robinia is a plant that, although preferring the bright and warm places, develops well even in shady coastal areas, even with strong winds and a harsh climate. It needs a deep and well drained soil. The planting is carried out by digging holes twice the size of the pot, where it is sold, taking care not to ruin the earthen bread.
As for irrigation, the plant should be watered only during periods of prolonged drought as it is satisfied with the rains. Fertilization should be done to the plant with organic fertilizer and then every 2-3 years in the autumn-winter period.
As for the propagation it is a plant that reproduces by seed, with spontaneous dissemination or by separation of the basal suckers. The seeds harvested in the autumn must be sown in spring. The suckers taken from the mother plant must be rooted in a mixture of sand and peat in equal parts. After rooting, the new seedlings should be kept in individual containers for at least 2 years.
The Robinia is a plant that, being fast growing, to give harmony to the crown or to raise it as a thick bush should be pruned at least every 2 years.

Uses and Traditions –
The Robinia pseudoacacia has been used in the past for the consolidation of the slopes, it is now a widespread species. In addition to providing excellent wood from coal and construction, it was used for the division of the fields and along the ditches and the rots.
It is a plant useful for consolidating the slopes thanks to the deep root system and the ease of propagation. It is then treated in coppice, it quickly creates stable populations. Given its very rapid diffusion since the 1900s, it has often proved to be a pest; in some areas it has completely replaced the native species. The root system with the nitrogen-fixing action also performs an action to improve the soil and generally creates a very dense undergrowth.
Introduced, as mentioned in Europe (Paris) in the early seventeenth century, remained a curiosity from the garden and collectors until the last twenty years of the nineteenth century, when it was used to consolidate landslides along the new railways. The import is due to Jean Robin, pharmacist and botanist of the king of France Henry IV. The specimen came from Virginia.
After arriving in Europe, the plant spread spontaneously in the most disparate environments, and is now naturalized in most of central Europe, from the south of England and Sweden, to Greece, Spain and even Cyprus. It is particularly common in France, Germany, the Netherlands, Belgium, Luxembourg, Switzerland, Austria, Hungary, Italy and Slovenia. It is naturalized also in Turkey and Israel, as well as in Australia and New Zealand. It is also widely cultivated in wood plantations in various European countries such as Hungary, France and other non-European countries such as China, South Korea and is also widespread in Africa.
The first introduction in Italy of Robinia was in 1662 in the Botanical Garden of Padua, ie sixty years after its introduction in Europe.
From this sample in 1750 the seeds were used to introduce the species in Germany, according to the intentions of the Empress Maria Theresa of Austria. In 1788, a specimen derived from a seed of the Paduan tree was introduced into the botanical garden of the Arcispedale of Santa Maria Nova in Florence, later transplanted into that of the Giardino dei Semplici. The author of this introduction in Tuscany was Ottaviano Targioni-Tozzetti.
Today the Robinia is present everywhere on the Italian territory, in particular in Piedmont, in Lombardy, in Veneto and in Tuscany.
As for its uses, Robinia pseudoacacia is a highly nectariferous plant and is of great importance in beekeeping. In fact, acacia honey is among the best known and appreciated and is the most common monoflora honey in stores; nevertheless, the national production is totally insufficient to satisfy the requests, for which Italy imports large quantities especially from Eastern Europe and China. It is a light colored honey, which remains liquid regardless of the temperature, with a light smell, delicate flavor and very low acidity; on the other hand it has a low content of mineral salts and enzymes. Acacia honey contains large amounts of chrysin, which is a powerful flavonoid.
Other uses are linked to the use of its timber which is yellow, with distinct rings, hard and heavy (specific weight 0.75). For these characteristics it can effectively replace tropical woods in use; among other things, the use of Robinia wood instead of exotic essences also allows to slow down the deforestation of tropical areas. For these reasons, some Italian regions have financed projects to enhance the woody cultivation of locust trees, obtaining contributions from the European Union.
The wood is used in heavy woodworking, for mining struts, for poles (the logs left in water for some months in autumn and winter acquire a particular tenacity), for outdoor furniture and for parquet.
This wood is also an excellent fuel.
The flowers are edible and these in various Italian regions are eaten fried in sweet batter and give the pancake a sweet smell and a particularly exquisite taste. However, it must be considered that the rest of the plant (both the stems and the leaves) contains a toxic substance for humans. Its toxicity on the other hand is not universal and some animals eat it. Goats are greedy and consume in quantity without any negative consequences.
However, for its adaptation capacity, Robinia often substitutes natural habitats and ecosystems, acting as a pest species for which its introduction must be evaluated in programs of careful agroecological and forest planning.

Preparation Mode –
As said the Robinia pseudoacacia is used in the kitchen for some uses; certainly the most interesting is that of honey, which could suggest an increase in the cultivation of this plant for the dual purpose of a melliferous plant and wood. Another use that can be made of this plant is that of the flowers eaten fried in sweet batter.