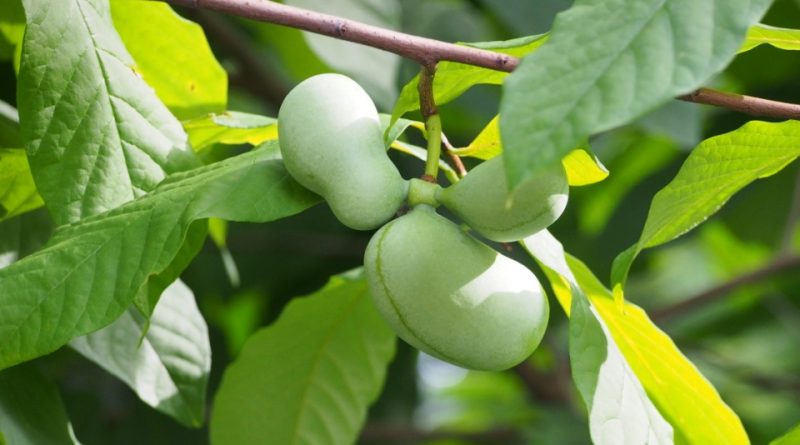 The Asimina, or Northern Banana, Mountain Banana, pawpaw, Asiminier (Asimina triloba L.) is an arboreal species of the Annonaceae family.

Systematic –
From the systematic point of view it belongs to the Domain Eukaryota, Kingdom Plantae, Subarranean Tracheobionta, Superdivision Spermatophyta, Division Magnoliophyta, Class Magnoliopsida, Subclass Magnoliidae, Order Magnoliales, Family Annonaceae and therefore to the Genus Asimina and to the Specie A. triloba.

Etymology –
The term Asimina derives from the name given by the Native Americans “Algonquin” to the plant, then passing from the French term cajun Asiminier. The specific triloba epithet comes from the prefix tri- and from the modern Latin lobatus lobato: trilobed, with three lobes, with reference to the chalice. The common American name Pawpaw derives from the name of the tribe of the natives Paw Paw, or Pawpaw, meaning “fruit of the Paw Paw”.

Geographic Distribution and Habitat –
Asimina triloba is a plant native to the eastern United States, in the area of ​​the Mississippi basin, with a distribution going from Norbraska to the west, to the Atlantic Ocean to the east; from South Carolina as a southern limit to the south of Canada, along the banks of the Great Lakes, in its northern limit. The plant is found in the wild in the valleys of the Appalachian mountains. Its habitat is represented by the undergrowth of forest formations with tall trees such as oaks and walnuts of the genus Carya. 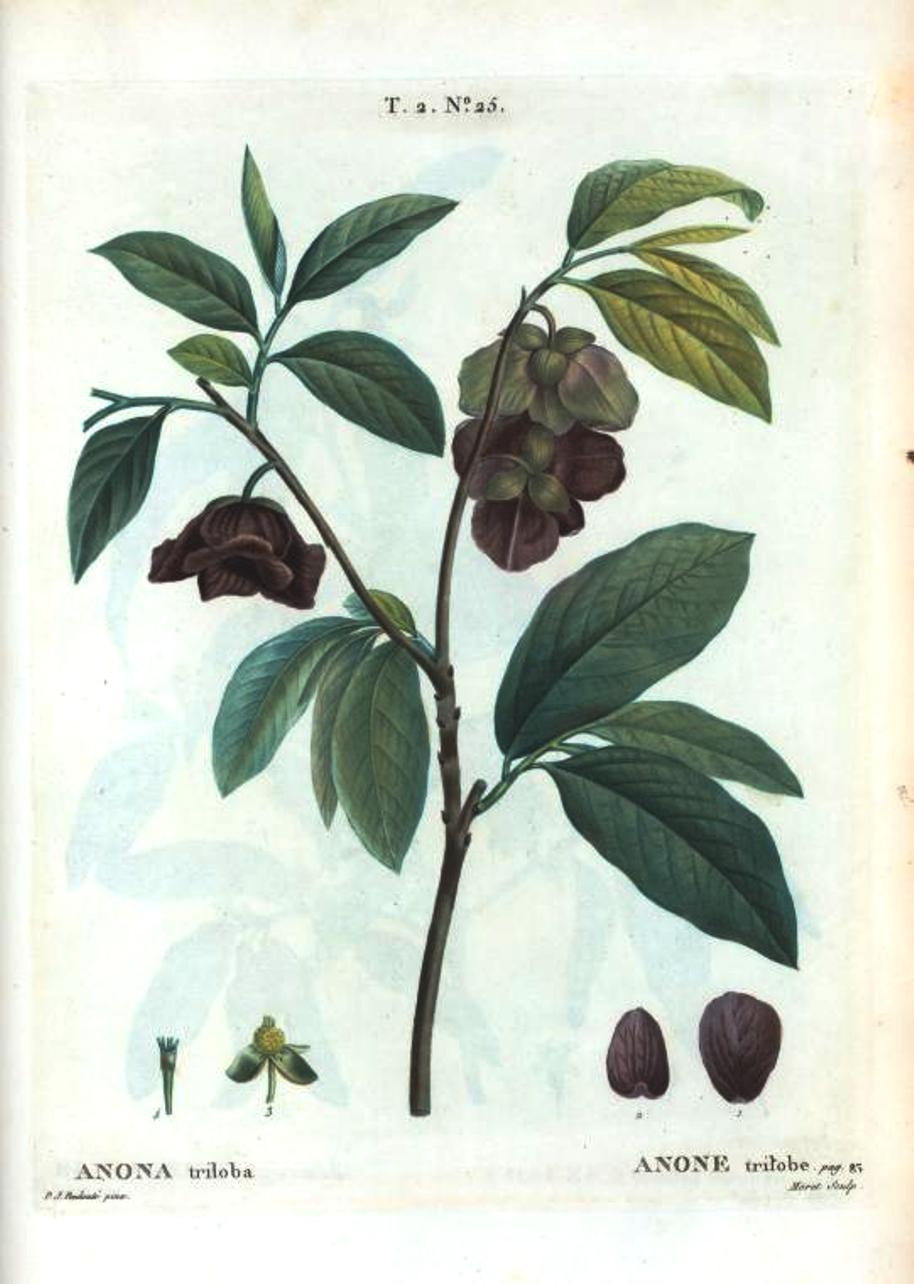 Description –
The Northern Banana is a deciduous fruit-bearing tree species in the form of a small shrub or tree that can exceptionally reach a height of 14 m. it is characterized by a rather slow growth that with a suitable pruning can be maintained a fruiting plant under 3 meters.
The buds are covered with a brown hair, they are easily distinguishable: the flower buds, which are formed during the summer (typically in July) on the new branches, have a rounded shape and the size of a caper; the wooden gems, on the other hand, are smaller, thin and elongated.
In spring the budding process begins, which is slow and atypical; the bud “swells”, begins to have a hairy pedicel and to dangle, growing more and more, starting only afterwards to have the appearance of a flower. The flowers are hermaphrodite, with a calyx consisting of 3 sepals and 6 petals; they are 4 cm broad on average and have a “fleshy” consistency and, at the end of the development, they are always facing downwards and of a dark red-purple color.
The flowering is quite scalar and, in Northern Italy, lasts throughout the month of April. The first flowers open before the appearance of the leaves, the last in concomitance. The fruit is similar to a squat banana, with a creamy, aromatic and fragrant pulp.
The Asimina triloba is a generally self-sterile species therefore, unless you have one of those few autofertile cultivars, you must have at least two different plants, so that you can have cross-pollination.

Cultivation –
For the cultivation of Asimina triloba take into account that it is a plant that resists up to -20 °, so it is a plant that can be successfully cultivated in Italy, although in very dry areas it will have to be watered frequently, especially during the first years.
However, the ideal climate remains that of Northern Italy, especially in the Alpine area, or of the humid valleys of the central Apennines, where storms and summer rains are common.
The species loves half-shade exposures, even if grown up, in areas not too torrid, it bears fruit better in full sun. For its origin the Asimina triloba, normally growing in the undergrowth, is one of the most tolerant fruit trees in the shade .
For this reason, during the first years of life a good shading will be essential, since the sun’s rays would burn the tender leaves, which only from the third year of sowing will start to be thick and resistant.
The plant reproduces by clonal, and especially in the areas of origin, endures the low environmental brightness until the opening of a breach in the vault of the forest, once more luminous positions are reached, fructification begins. The Asimina triloba tends to disappear in closed and thick forests while it is maintained for a long time (millennia) in the form of a grove of suckers in environments that suffer occasional disturbing actions such as, for example, the banks of the rivers.
For details of the cultivation techniques and for the pedoclimatic characteristics, please refer to the following sheet.

Uses and Traditions –
Within its area of ​​origin many localities take the name of “paw paw” because of the presence of Asimina plants, the same name is also used in the names of schools because the fruit was very welcome to children who went to pick it up in the woods at the end of summer.
Probably the current distribution of Asimina in North America is due to the dispersal of seeds implemented up to about 10,000 years ago by the now extinct Megafauna. The great animals that inhabited the continent became extinct during the Quaternary with the arrival of the first men. Subsequently the men replaced the megafauna as dispersal agents of the Asimina seed, activities that continue today.

The first documents relating to Asimina date back to 1541 and are contained in the diaries of the expedition of Hernando de Soto, who found it among the plants cultivated by the Natives east of the Mississippi River.
Subsequently, after several years, the participants in the great expedition of Lewis and Clark had occasion to feed themselves on the fruits of Asimina during their journey to the unknown.
It is recalled that cold Asimina was the favorite dessert of George Washington; Thomas Jefferson decided to plant Asimina in his residence in Monticello, Virginia.
In the past it was in use, among the inhabitants of the Midwestern countryside, to go to the woods in late summer in search of the best spots of Asimina in which to collect ripe fruits from the ground. This tradition was widespread among children who were very skilled that combined this activity as a game and as a rare opportunity to eat something sweet at will. Of this tradition there are several testimonies including a popular song that we can find in infinite variations throughout the eastern United States: Way down in the pawpaw patch.
It is also interesting to see how the curious aspect of the fruit has led over time to the creation of innumerable local nicknames that refer to the presumed resemblance to the species of the genus Musa, with which it has no relation among which we can find: wild banana, banana mountain, prairie banana, poor man banana, indians banana, West Virginia banana, Kansas banana, Kentucky banana, Michigan banana, Missouri banana, and so on.
Dell ‘Asimina triloba have been made numerous selections, for the most part originated from wild plants, but also starting from previous selections.
Remember that all parts of the plant (excluding the pulp of ripe fruits) are toxic due to the presence of acetogenes with a marked antimitotic activity, which therefore prevent cell replication; these substances are being studied for their particular efficiency in the treatment of tumors.
For this reason, the plant, due to its contained substances, is extraordinarily resistant to pests and diseases, especially in humid environments, where it does not need any treatment.
In the United States the plant is cultivated in butterfly gardens, (gardens intended to breed butterflies) due to the fact that it hosts a large white-black zebrate winged swallowtail butterfly (Eurytides marcellus) whose caterpillar feeds on the leaves but Norm does not produce significant damage to the plant.
In addition to the uses of the fruit of A. triloba, the plant has been used for other purposes and purposes:
– the inner bark of the plant, strong and fibrous, was used by the Native Americans and the first settlers of the Midwest to prepare ropes, fishing nets, mats and to tie the fish;
– Asimina trunks divided into quarters were used for the construction of fences in Arkansas;
– the seeds, hard and shiny of this plant were brought with them as amulets in Ohio because they were believed to bring good luck, in the same way in which the seeds of the Ippocastano are used in Italy.
– it is also cultivated as an ornamental plant but in Italy it is present only in some botanical gardens and experimental orchards.

Preparation Mode –
The Asimina triloba is a plant that produces fruits, which have a creamy and aromatic pulp, reminiscent of a mixture of pineapple, banana and mango. The use is obviously and more like fresh fruit, but crops are also used for industrial productions and preparations such as jams, yoghurt, creams and ice creams.