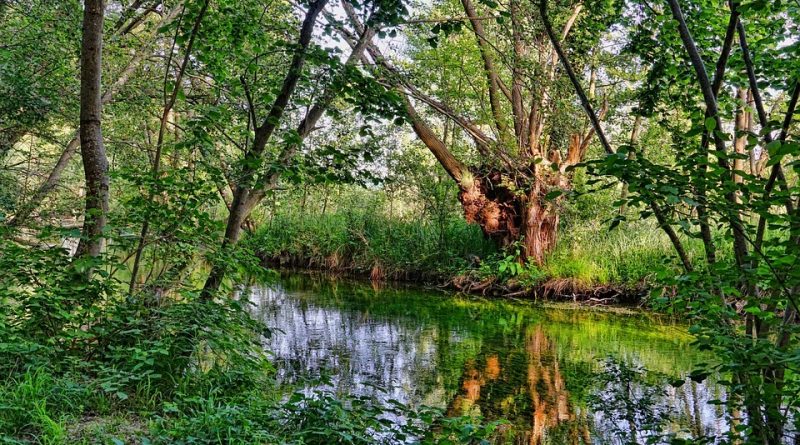 For ripial or more properly Zona Ripariale means an ecological zone between the earth and a water body that flows on the surface. With reference to the concept of the riparian zone, plant communities that grow along the edges of the river are called riparian vegetation, which is a vegetation characterized by hydrophilous plants.
The riparian areas play a very important ecological role. In these ecological zones, intermediate between watercourses and dry areas, plant species play a role in soil conservation, biodiversity maintenance and influence on aquatic ecosystems.
Riparian Zones assume different characteristics depending on the bioclimatic area where they are located and can not be assimilated to an ecosystemic uniqueness.
These areas represent important natural biofilters, which protect aquatic environments from excessive sedimentation, contaminated run-off and from erosion. They provide shelter and food for many aquatic animals as well as shade which is an important part of regulating the temperature of watercourses.
However, let’s see what the ecological functions of the riparian areas are:
– Dissipating the energy of the courses: the sinuous curves of a river, combined with the vegetation and the root systems dissipate the energy of the course, resulting in less erosion of the soil and a reduction of flood damage;
– Trapping sediments: reducing sediment suspension creates less cloudy water, fills the soil and builds the banks of the courses;
– Filter pollutants from runoff and increase water quality through biofiltration;
– Provide habitats for wild flora and fauna, increase biodiversity and fodder for wildlife and livestock;
– Provide corridors to wild flora and fauna: allow aquatic and riparian organisms to move along river systems avoiding isolated communities;

– Provide irrigation to the original landscape by extending seasonal or perennial water flows.
The protection of a Repair Zone is therefore essential to maintain an ecological balance whose degradation would irreversibly affect the ecosystems contiguous with significant environmental problems.
For this reason, due to their important role in supporting species diversity, the Riparian Zones are often subject to national protection in the context of a Biodiversity Action Plan. Also the urban regulations take into consideration the census, the cartography and the protection of these areas in order to protect them and avoid them from uncontrolled anthropic actions.
In particular, the Riparian Zones are fundamental for the quality of the water both for the runoff and for the sliding of the same in courses through the subsoil or the flow of the aquifers. In particular in this buffer zone it is important to reduce nitrates or denitrification from fertilizers. In fact, riparian areas can play a role in lowering nitrate contamination in run-off from agricultural fields, runoff that would otherwise damage ecosystems and human health. The use of riparian zones in wetlands shows a particularly high rate of removal of nitrates entering a watercourse, and is therefore placed in agricultural management.
The need to protect the Riparian Zones was ratified for the first time by the Convention on Wetlands of International Importance, signed in 1971 in Ramsar (Iran) by over one hundred countries; through this Convention over 900 wetlands have been identified all over the world.
In Italy the sites included in the Ramsar Convention are 46.