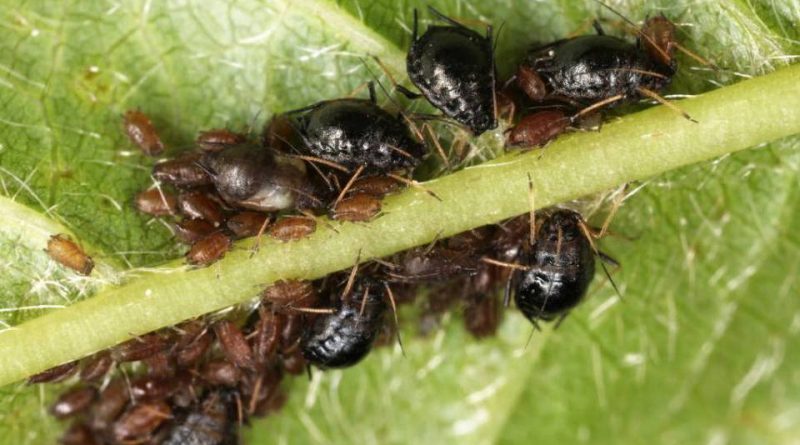 The black cherry aphid (Myzus cerasi (Fabricius, 1775)) is a Rincote omopter insect of the Aphididae family.

Geographic Distribution and Habitat –
The black Afide of the cherry tree is an insect of Mediterranean origin but now cospolita, widespread throughout the world in the cerasi cole areas and living in the areas where mainly grow Prunus cerasus and Prunus avium as primary insect guests.

Morphology –
The black Afide of the Cherry is a small insect, 1.8-2.6 mm in size, of a blackish glossy color, in the adult stage, while it is lighter, tendentially brownish, in the juvenile stages. The limbs and the antennae are yellow and black and the tail is brown.

Attitude and biological cycle –
Myzus cerasi is generally gregarious and mainly colonizes leaves and shoots where the damage due to the trophic insect bites occurs.
On the lower page of the leaves, it causes marked deformations and crumple, while on the shoots there is atrophy and deformed growth, twisted and with shortened internodes; the attack determines the loss of the animal.
When Black Cherry’s Afide attacks plants in production, it can also damage the fruit stalks or cherries, with serious repercussions on production, due to the poor commercial quality of the fruit. The further damage is due to the production of the honeydew that smears the fruits and the vegetation causing the indirect damage already described for other Aphids.
The Myzus cerasi is an aphid that has a dioecious cycle that mainly plays on the Cherry (primary host) and on spontaneous and infesting herbaceous plants (Euphrasia, Galium, Veronica, etc.), on which it migrates during the summer period.
The Afide winters at the egg stage, at the base of the Cherry buds, or in other natural shelters near the orchard. At the vegetative restart of the beginning of spring, we have the first nymphs that evolve into founders; these originate a series of generations of fondatrigenie whose maximum presence, on the Ciliegio, occurs in the period between the end of April and the first days of June, a period in which there is the overlap of the generations. This brings us to the summer period in which migrants appear who gradually move on to secondary guests, abandoning the Cherry tree where they return in the autumn period to lay down the durable egg. In some cases a certain number of parthenogenetic females remain on the Cherry tree also in summer and close the cycle in the fall.

Ecological role –
The complexity of the biology and the cycle of the Myzus cerasi is completed by the presence of the ants that, as for other aphids, defend and spread it. Furthermore, the greatest infestations occur in overly specialized crops, with narrower sixths, with low luminosity inside the plant and in conditions of poor grassing and nitrogen fertilizations which, by softening the tissues of the plants, attract their presence more. For this reason the containment of the black cherry tree must be set up from the design of the tree plants and must then follow with appropriate techniques of agroecological nature (such as grassing, presence of hedges where nesting entomofauna useful, correct fertilizations, pruning, etc. .). the real fight against the black Afide of the Cherry follows the criteria of the guided and integrated fight and makes use of sampling to establish the thresholds of intervention.
This technique includes:
– a sampling on the shoots, from flowering to the beginning of ripening; the intervention threshold is about 3% of infested shoots, or the presence of the plant in areas with a high risk of infestation; the intervention, obviously, is performed only when the threshold is exceeded.
In these cases you can use specific aficidi, possibly endotherapic, which can also reach the Aphids inside the curled leaves. However, care must be taken to protect the useful entomofauna and its natural enemies by making a careful analysis of the relevant biocoenoses.