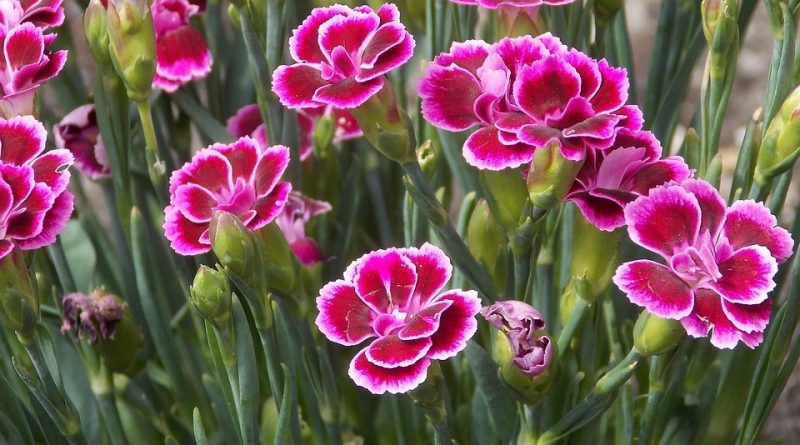 The common carnation (Dianthus caryophyllus L.) is an herbaceous species belonging to the family Caryophyllaceae.

Systematic –
From the systematic point of view it belongs to the Domain Eukaryota, Kingdom Plantae, Division Angiosperms, Order Caryophyllales, Family Caryophyllaceae and then to the Genus Dianthus, Species D. caryophyllus.

Etymology –
The term Dianthus comes from the Greek Ζιός Ziós genitive of Ζεύς Zeús Jupiter (Jupiter for the Romans) and from ἄνθος ánthos flower; plant mentioned by Theophrastus. The specific epithet caryophyllus, according to some authors from Carya, from the Greek κᾰρύα carya the walnut Juglans regia (whose fruits were called κάρυον cáryon) and from φυλλον phyllon leaf, because it smells like walnut leaves.

Geographic Distribution and Habitat –
The common Carnation is a plant native to the area between Greece and Iran, although its exact origin is unknown because of the extensive cultivation that has been done over the last 2,000 years; from this species originated the numerous varieties obtained by means of genetic improvement. 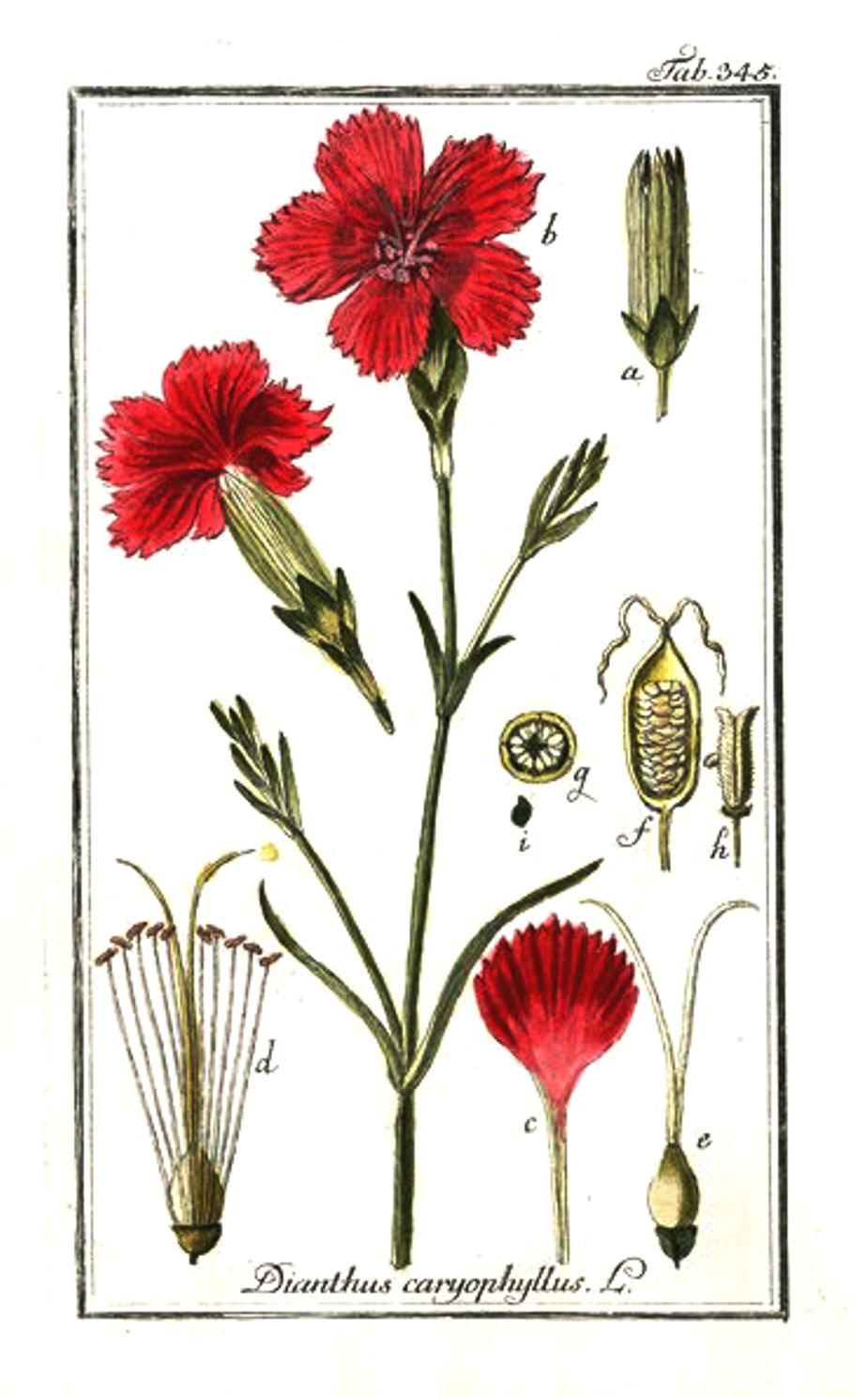 Description –
The Dianthus caryophyllus is a perennial herbaceous species that can reach a height of 80 cm. The plant is characterized by a root system that develops first from the primary root, which soon ceases its development and is replaced by secondary lateral roots adventitious. The stem is semi-woody, with a semiprostrato bearing on which the leaves are inserted, starting from enlarged knots that appear opposite, linear, pointed, covered with waxy pruina. These are gray-green, tending to green-blue, thin and long up to 15 cm.
The flowers are single or grouped in an inflorescence up to five; they have a diameter of 3-5 cm and are delicately scented. The original color of the flower is a natural and brilliant pink-purple, although there are other cultivars of different colors, including red, white, yellow and green.
The flowers are characterized by a small calyx (anatomical part placed under the calyx) which is made up of 5 or 6 parts while the calyx is welded and therefore the gamosepalo. The corolla is gamopetala, with 5 petals welded together forming the jagged edge characteristic of the flower of the carnation. The stamens are 10 even if these are often absent depending on the period of flowering that causes these parts to turn them into petals or to a reduction in the number. The styles are two with papillose stigmas; the ovary is suber. The fruit of the Carnation is a capsule that is to contain the seeds, triangular in number and variable between 70 and 90.

Cultivation –
The Dianthus caryophyllus love quite sunny places, but where they can enjoy the coolness of the shade during the hottest hours of the day; in areas with warmer temperatures, carnations need more shade. These are plants that do not have great requirements as regards the growing substrate, it is sufficient that it is a slightly alkaline soil, and very well drained, even sandy.
To get good blooms need regular watering in the spring weeks, with mild climate. The flowering lasts for a few weeks, then it is necessary to remove the stems that carried the flowers, to keep the plant compact; after flowering we can water the carnations even only sporadically. For details of the cultivation technique refer to the following sheet.

Uses and Traditions –
The carnation is a plant of ancient history; it is mentioned in the Greek literature of 2000 years ago. The name “Dianthus” was attributed to him by the Greek botanist Theophrastus. Some scholars believe that the name “carnation” derives from “coronation” or “crown” (garland of flowers), as it was one of the flowers used for ceremonial crowns in Greece. For others the name derives from the Latin “caro” (genitive “carnis”) (meat), which refers to the original color of the flower, or incarnatio (incarnation), which refers to the incarnation of God made flesh.
But not only mythological legends are linked to the carnation but also in history there are many stories related to this extraordinary flower, for example it is said that in 1270 the death of numerous soldiers of Louis IX, King of France, due to a plague epidemic during the Tunis crusade, she was arrested thanks to a clove distillate. Still in the historical context, in reference to the great characters, it is said that when Marie Antoinette, during the French Revolution, was imprisoned, she continued to receive messages that were delivered to her after having carefully rolled them up in cloves of carnations.
Moreover, also in France, in the nineteenth century the red carnation became the symbol that Napoleon used to decorate the Legion of Honor ribbons, and was brought to the buttonhole of the nobles who were to be guillotined, while in that same period the white carnation was the flower symbol of the monarchy. In the second half of the nineteenth century, however, the red carnation became the symbol of the socialist movement.
In the Italian tradition the carnation is considered in Bologna the flower of St. Peter and in Rome the flower of St. John the Baptist.
The name carnation, although originally applied to the species Dianthus caryophyllus, is often referred to some of the other species of Dianthus, and more particularly to hybrids made between D. caryophyllus and other species in the genus.
In Italian gardens, carnations are not widely used, although they are not difficult to cultivate; the annual species are preferred, or to be cultivated as such, as the carnation of the poets or the carnations, small in size, ground cover, with a prolonged flowering.
Over time, numerous cultivars have been selected as garden plants. Typical examples are the varieties called ‘Gina Porto’, ‘Helen’, ‘Laced Romeo’, ‘Red Rocket’.
The most significant cultural characteristics are the re-flowering, that is the ability to emit flower several times during the year (7-10 flowers).

Preparation Mode –
The Dianthus caryophyllus is a plant widely cultivated worldwide for cut flower or for the formation of flowerbeds or flowered areas. Besides these uses, it does not have particular pharmaceutical or food uses.
The so-called cloves do not derive from this plant but are a spice of Asian origin that is obtained from the dried buds of the Eugenia caryophyllata plant.