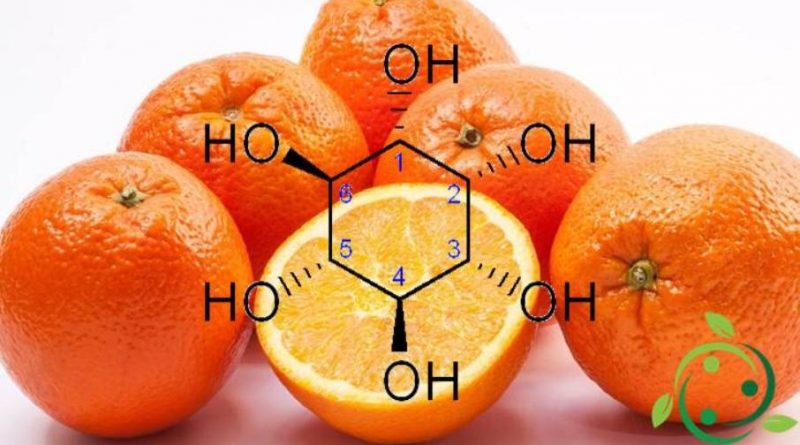 Inositol, whose name in the IUPAC nomenclature is: cis-1,2,3,5-trans-4,6-cyclohexanesol and whose brute or molecular formula is: C6H12O6, is a compound of biological origin similar to glucose ( even if it is not a sugar), involved in many biochemical processes at the cellular level, and is, in addition, in the form conjugated with lipids, a structural element.
Inositol is found in nature in many foods: in cereals, nuts, fruit (especially melons and oranges) in bran, whole grains, wheat germ, brewer’s yeast, and meat in general. It is particularly present in the liver, which is the key organ for its endogenous synthesis (an action, this, shared with the kidneys).
However, the inositol present in food is in an insoluble form and therefore often scarcely absorbable. In spite of the definition of Vitamin B, used by some authors, inositol is not a vitamin because unlike these the body is able to synthesize it in sufficient quantity for which it falls into the class of pseudovitamine in the complex B.

In general, therefore, inositol can be either taken with the diet or synthesized by the body. It can be found in the form of different stereoisomers and has a more or less high degree of phosphorylation. In particular, when it comes to inositol, it is commonly referred to the myositisol form, which does not have bound phosphoric groups.
Once produced, or taken in soluble form, inositol enters the cells, where it is largely transformed into phosphatidylinositol; the biological actions of this substance are many and in some ways still to be clarified. We know, for example, that it is active in plasma membranes, where it participates, as a precursor of second messengers, to signal transmission systems that control cell activity.
Inositol, and its derivatives, participate in numerous fundamental biological processes, such as:
– Insulin signal transduction;
– Cytoskeleton formation;
– Nervous system;
– Control of intracellular calcium concentration;
– Maintenance of cell membrane potential;
– Degradation of fats; Regulation of gene expression.
Inositol also helps the brain in states of anxiety, depression and severe psychic stress and is considered a mild sedative.